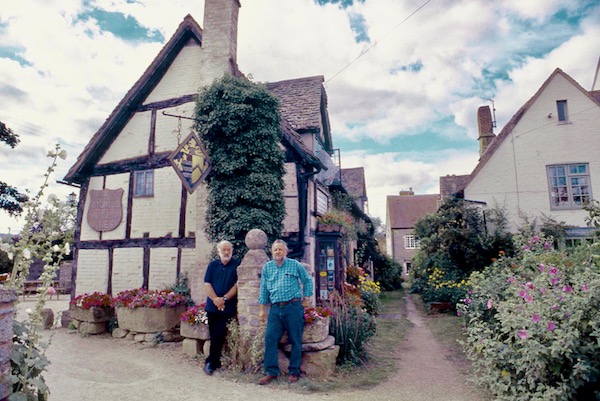 Lloyd Thomas (left) and Jim Nawara outside the historic Fleece.

Our old friend Jim Nawara and his old friend Lloyd Thomas accomplished this quest in summer of ‘96.  Lloyd died recently, and Jim recalled their adventure on Facebook. I had to hear more about it. 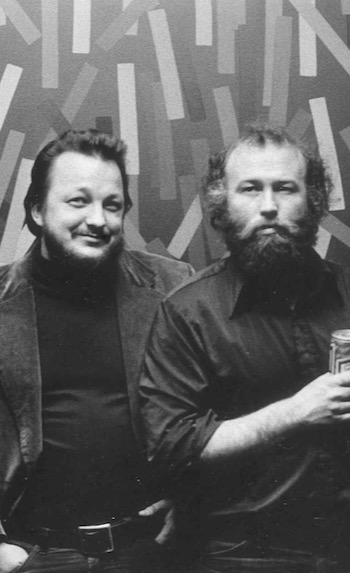 Jim and Lloyd met at the legendary Cobb’s Corner Bar in Detroit in 1969. Jim had begun teaching painting and drawing at Wayne State University. British-born, Ontario-raised Lloyd was a new student at WSU.

Jim says, “The very first thing Lloyd said to me was, ‘Would you care for a drink?’ I said, ‘I’ve been known to take a drink on occasion.’”

That began a long, liquid friendship.

In the 60s and early 70s, Cobb’s Corner was a hangout for art students and faculty from nearby WSU, many of whom exhibited at the artist-run Willis Gallery near Cobbs Corner. Bar patrons included future legends like poet John Sinclair—later imprisoned for marijuana possession—and the band MC5. The bar and gallery belonged to Bob Cobb, the real estate developer behind Plum Street—Detroit’s take on London’s hippie-inspired Carnaby Street. Several Cobb’s Corner patrons became known as first generation Cass Corridor artists, some of whose work I’ve collected. Bob Cobb married my childhood friend Jane Jospey. Diabetes turned Jane blind as a young woman. She and Bob have both died, but I remember how lovingly he took Jane’s hand and guided her everywhere.

Whew! That was quite an aside! Back to Jim and Lloyd’s fine adventure… 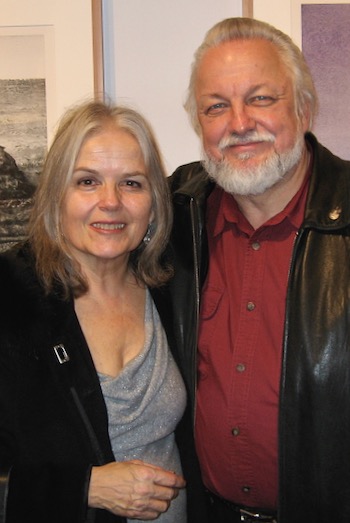 In 1971, Jim and wife Lucille, also a painter, and Lloyd and his then wife traveled to England and Scotland. Lloyd taught Jim to appreciate English ale. They spent the next 20-plus years talking about doing a serious tour of English pubs. In 1996, Lloyd said, “Dammit, let’s go before we’re too old.”

“I was reluctant because of my finances,” Jim says. Soon after, Lloyd announced he’d bought Jim’s  plane tickets. Jim spent the next 3 months planning their car route to the Midlands, Birmingham, Somerset, Cornwall and southern England, researching pubs along the way. “The goal was to drink cask-conditioned real ale in beautiful, ancient pubs.” In 2 weeks they visited 50 pubs, 400-1000 years old, in the most original shape possible. Ale, neither pasteurized nor pressurized, came from small kegs, pumped by hand.

The Fleece Inn in Bretforton, Worchester, was a favorite. 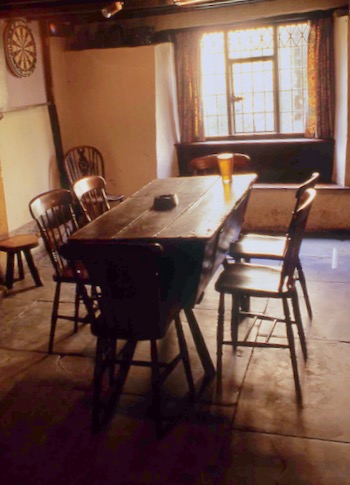 Interior of the Fleece.

Built around 1425 as a longhouse that sheltered a farming family and their livestock, it was first licensed as a Public House (Pub) in 1848. It became the first pub in the National Trust. The Fleece still practices the medieval superstition of chalking circular marks on the stone floor in front of the fireplaces to prevent witches from descending the chimneys. (There’s even an extensive Wikipedia page about The Fleece.)

When the pair entered through the low door of The Fleece, Lloyd stopped suddenly. “He turned and spoke in a foreboding preacher’s voice: ‘May God have mercy on our souls, for we are about to sin.’” Jim disavows any actual sinning. But, he says, “We were awed by this beautiful and enchanted place to savor a few pints of real ale.”

Lloyd had spent much of the trip carrying on about his expectations for The Fleece. Jim had told him: Knock it off already. When they arrived, Jim said, “I need to ask your forgiveness. When you raved about this place, you weren’t exaggerating.”

At the Smith’s Arms, a thatched-roof pub so small the twosome had to crouch to be seated near an exterior wall, Lloyd toasted Jim, “Here’s lookin’ up yer kilt.”

Jim continued to teach painting at WSU for 46 years and to paint beautiful landscapes. Lloyd bounced around. He made large non-objective paintings of colorful hard-edged bar-shapes. He taught painting at Central Michigan University. He also worked in a mental health hospital, as a pile driver, a stock-car racer, a carpenter at COBO Hall and a maker of concrete forms for industrial sites. 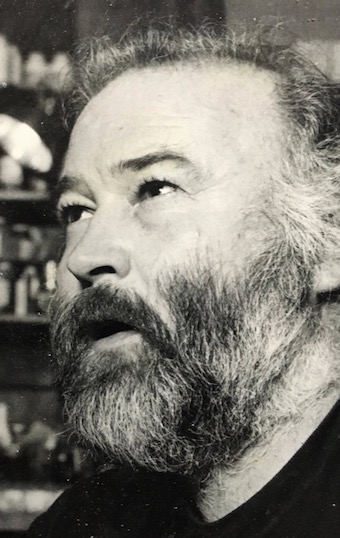 Lloyd Thomas in his prime.

“Lloyd did some outrageous stuff,” Jim recalls. Years ago, at a party at Lloyd’s house, “everyone was sloshed.” Lloyd left the house for a minute, and his friends locked him out. They proceeded to eat all the White Castle burgers while Lloyd pounded on the door. Realizing his friends were pranking him, Lloyd went to the garage, returned with a steel pry bar, and hurled it like a spear through the door.

Jim’s father once saw Lloyd walking down a street toward a Detroit bar where they were meeting. He said, “Lloyd’s a hard guy not to like.”

In recent years, Lloyd stopped showing up at events and either didn’t have a phone or didn’t answer. An ex-girlfriend, a nurse, took great care of him until he went into assisted living where he couldn’t smoke or drink. Jim visited him there once. Lloyd wore a black t-shirt and “still had that twinkly smile.”

Jim told him, “Take care of yourself.”

Lloyd died in early May of this year.

Lloyd was one of those larger than life characters Hemingway often shared with the world. I’m sorry I never knew Lloyd, but Jim’s FB posts and recollections made him come alive again. I thought about painter Jackson Pollock whose drip painting style brought him worldwide fame. Then, alcoholism destroyed him in a car crash. As I opined in a recent column on reformed drinker Michael Richker, booze can be a blessing or a curse.

Thanks, Jim, for sharing your colorful buddy with us.

Jim outside the famous Smith’s Arms.