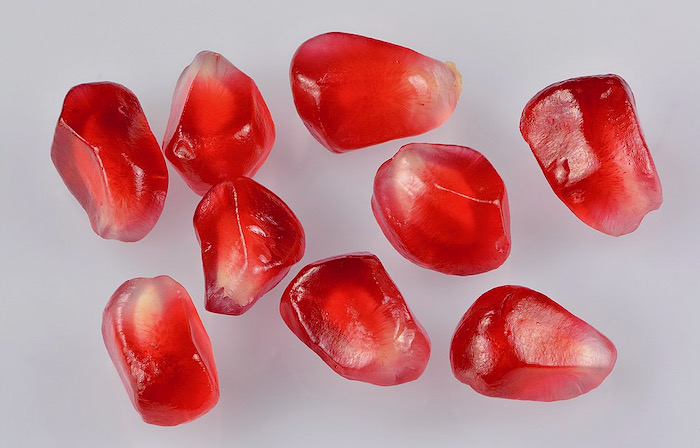 Godsigns readers know I like to mix it up.  My last column on Patty Runquist and Stevie Schaefer was my first mother/son subject.  This week’s ode to the pomegranate marks my first culinary column.  Hope you eat it up.  (Couldn’t resist.)

Last winter the WSJ ran a profile on Diane von Furstenberg.  As a correspondent for Women’s Wear Daily and a fashion editor early in my career, I’ve followed Diane for decades.  I’ve worn her wrap dresses and been a fan through her marriage and divorce from Prince Egon von Furstenberg.  (His father, a German prince, and mother, a member of Italian nobility and an heir to the Fiat Automotive fortune, were less than thrilled with Diane’s Jewish heritage.)

Diane later married American media mogul Barry Diller.   They’ been very philanthropic, including pledging $20 million to the New York High Line.  This elevated park and path installed on a discontinued railroad spur is one of my sister’s and my favorite walks on our sisters’ trips to New York City.  But that’s just one reason for my DVF appreciation.

My stomach appreciates her, too.

Several months ago, I read a feature on DVF in the WSJ magazine.  ICYMI (I love acronyms, as if you hadn’t guessed), Diane mentioned that for breakfast she eats yogurt and pomegranate seeds.

Sounds interesting, I thought.  I was already eating yogurt and berries for breakfast. 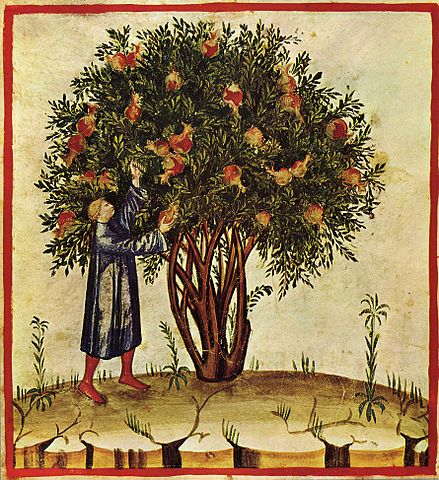 A pomegranate tree in an illustration for the Tacuinum Sanitatis, an eleventh-century Arab medical treatise by Ibn Butlan of Baghdad.

I hustled over to Publix and bought some pomegranate seeds.  They were sweet/sour and crunchy and—like Mikey–  I liked them.   I continued to buy them—out of the shell or in.  You Tube showed me how to extricate the seeds.

I have IBS.  (Yay! I snuck in another acronym!)  Irritable Bowel Syndrome is what docs call stomach distress when they can’t figure out what else to call it.  I’ve had IBS for years—maybe a result of chemo 17 years back.  Who knows?

After three or four months, it occurred to me that my IBS had significantly lessened.  Only one thing in my diet had changed: pomegranate seeds.

Friends of a certain age may have noticed: as we—ahem– mature, our organs become less cooperative.  My sister, Anne, has several friends in California who get together often.  They start their conversations by limiting themselves to what they call “a 10-minute organ recital.”

What inspired me to share my new tummy treatment (I love alliteration, too) was a recent article in the Detroit Jewish News.  According to contributing writer Keri Guten Cohen, “Pomegranates have a long Judaic history—from Jewish ritual objects to ancient Jewish coins, to Jewish cuisine, and Jewish art, architecture and jewelry.”

Keri writes that pomegranates likely originated in Iran and have grown in the Mediterranean region since ancient times.  King Solomon used pomegranates as capitals for the columns of the First Temple, later destroyed by the Babylonians.  Solomon saw pomegranates as symbols of love and fertility and used a pomegranate metaphor to describe a lovely young woman in Song of Songs 4:3.

Pomegranates are significant during Rosh Hashanah, the recent Jewish holiday.  The symbolism stems from the belief that the fruit contains 613 seeds (arils), the same number as the 613 mitzvot (commandments) in the Torah.

Pomegranate season is upon us: October through January.  Give this noble fruit a try.  Only leave some for me, SVP!

NOTES ON PHOTOGRAPHS: The top photograph today is an award-winning photograph shared via Wikimedia Commons by Ivar Leidus, which means you are free to share that beautiful photograph with friends in celebration of November’s National Pomegranate Month. The illustration of a pomegranate tree comes from a later Italian copy of Ibn Butlan’s original guide to home medicine. He was a physician and a member of a small Arab-Christian minority, the Nestorians. His guide to hygiene, diet (including his recommendation of eating pomegranates) and exercise was widely used around the Middle East.