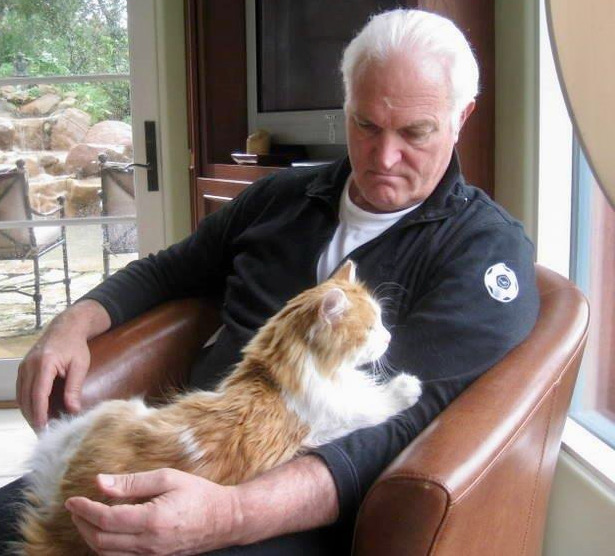 The late Michael McGuire and Buddy, comforting each other in their final year.

DC’s husband, banker Michael McGuire, had been sick for a year. His struggle with bladder and prostate cancer left him unable to focus on business. The couple, married for 25 years, “lost everything.” That included a lodge mountain home in Idaho and another beautiful home in Santa Barbara. Mike died in October, 2018. DC was devastated.

One family member brought solace during those rough last months.  Buddy, the McGuires’  Maine Coon cat, was “18 pounds of macho and thought he was a dog,” DC says. “He’d greet me at the door when I came home with his tail wagging. He’d snuggle with me and comfort me.” D.C. and Mike had no children together; their stepchildren lived elsewhere.

A practicing neuroscience researcher, DC’s also a painter. When Michael died, she felt inspired  to paint a picture of clouds depicting the idea of energy moving heavenward. Soon after Mike died, Buddy became ill. DC had called a pet psychic. (Who knew there was such a profession?  But, hey, this is California.) About Buddy, the pet psychic said, “I see him leaving. He needs to go to be with someone who’s passed. He’s telling me something odd. He’s telling me he’ll be back.”

Realizing how sick Buddy was, DC placed the canvas of clouds on the floor.  Buddy laid down on it, faced the sky and “right away took his last breath.”

Again, DC was heartbroken. “Buddy’s death felt like an extension of Michael leaving. He was my last connection to my husband. I was having a really hard time.”

A few weeks later, an unsubscribed email from Adoptapet.com arrived. DC opened the website, looked under Cats, then under Maine Coons. “They’re a special breed,” DC says, “very rarely available for adoption.” On her laptop screen, a picture appeared. A fluffy cat with unusual white and cinnamon markings, just like Buddy’s, gazed up at her. The cat had belonged to someone who died of a stroke. DC scrolled down. 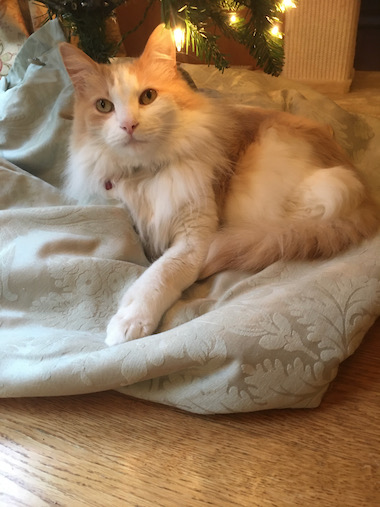 DC dissolved into tears. At the time she was living in the guest house of a friend. Her host “had made it absolutely clear she did not want a pet in her cottage. I didn’t have the nerve to ask how she’d feel about a cat in her guest house.” But she showed her friend the photo of what looked like a twin of her departed Buddy—with the same name. Her remarkably gracious friend looked deep into DC’s eyes. “She said, without a moment’s hesitation, ‘You have to have him.’”

DC filled out a three-page, single-spaced questionnaire to determine whether she’d be a responsible pet parent. A series of tests on the featured cat took two more weeks. Finally the shelter staff responded: DC would indeed be a “fit parent.”

The shelter advised that Buddy 2 would be available on April 24—Mike’s birthday. Upon arrival, she says, “Buddy hopped into my arms. He’s sitting here now, listening to our conversation.”

As a scientist, DC’s trained to look for data to confirm or rule out a hypothesis. “In Buddy’s case,” she says, “I’m left without an answer. But who cares? We both have hearts and souls longing for love and connection.”

DC provides “brain coaching” for people suffering from anxiety, stress and PTSD. Her research is based on brain scanning technology, especially FMRI  (Functional Magnetic Resonance Imaging) to “rapidly rewire the brain to reduce past and future emotional trauma.”

DC speaks and coaches about developing new brain patterns. Our brains can develop new “muscles,” she says, with repetitive techniques as simple as breathing. “Without prescriptions, trainers, special equipment or a degree in neuroscience, all of us can manage our brains for healthier, happier, more successful outcomes.”

DC’s working on a series of children’s books featuring Dr. Duh and Buddy the Wonder Cat. (Dr. Duh is DC’s avatar.) “Children who use their brains productively develop a sense of empowerment.”

Invited to speak to a medical school in the Republic of Georgia, DC worked with third and fourth graders on the difference between reptilian, animal and human brains. After, she received emails from the teachers of her young students. “The teachers told me those kids have become the peacemakers of the school. If another child is acting inappropriately, they’ve learned to tap them on the shoulder and ask, ‘What do you need?’” The teachers said the work DC did with their youngsters “changed the dynamic” of their classes.

Stress, anxiety and trauma, real or perceived, cause us to breathe rapidly and shallowly, changing oxygen to carbon dioxide, DC says. A brain deprived of oxygen responds as if it’s under assault. It activates the fight, flight or freeze reaction. Blood, oxygen and other essential resources are redirected to bones and muscles. That impairs behavior management, empathy and digestion.

Stress turns off our analytical thinking and turns down our immune systems. DC works to help traumatized individuals recognize that while they may be dealing with a horrible situation, they can redirect their thinking from the amygdala (fight or flight brain) to the hippocampus. Strong emotions get encoded chemically into every cell of our bodies, she says. The amygdala is one of our largest producers of dopamine.

The technique of working with FMRIs was developed by Dr. Fred Schotz, a naturopath who’s helped about 3500 military vets cope with battlefield trauma. Dr. Schotz happens to be DC’s first husband. DC remains “good friends” with him and his second wife.

Ancient Egyptians associated the number nine with their god, Atum-Ra, who took the form of a cat and birthed eight other gods.  After losing two of your best buddies in half a year, DC, I hope your current Buddy has several lives to go.

Thanks for sharing a sweet  story of  what could have been a CAT-astrophe.  (Groan. Couldn’t help myself.)  And for the lesson in compassion. 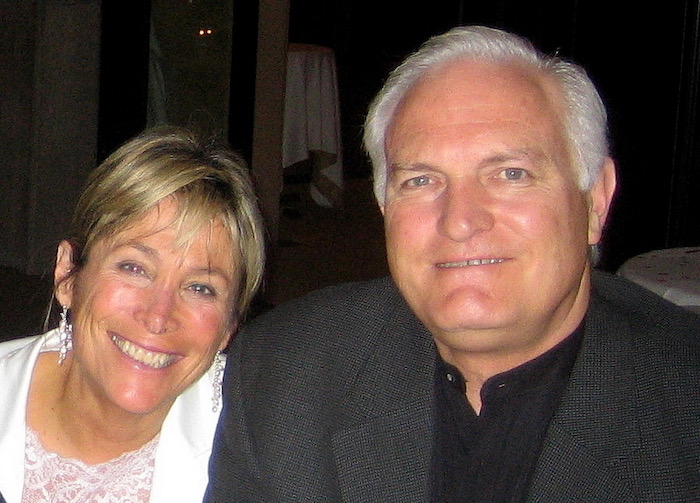