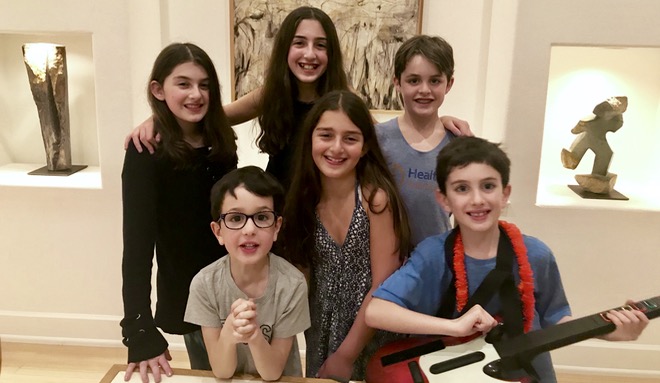 Grandkids prepare to put on a show.

I don’t fear heights.  But mechanical things?  Another matter. 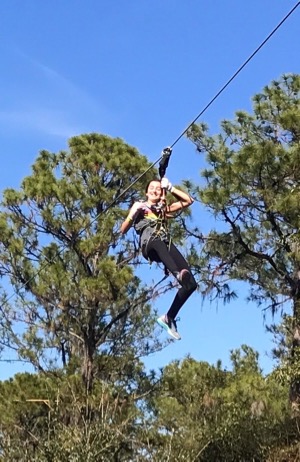 Alexis on the zip line.

On New Years Eve day Burton and I drove 5 grandchildren to TreeUmph, a challenge course in Bradenton, FL.  I had long wanted to ride on a zip line.  This was my chance.

I didn’t realize the extent to which mechanical ability was needed.  I can barely open a wine bottle, no less comprehend 3 different devices attached to a harness attached to me, required to be hooked in specific order to other hooks that fail to operate unless properly installed.  All this to participate in hair-raising challenges which guides insist are safe.

I did not speed through the maneuvers.

Through the kindness of strangers, I eventually hooked myself properly to the first 3 challenges.  Balancing one foot on a swinging rod several feet off the ground and toeing the next swinging rod, I realized this was more than I bargained for.  All I wanted was to whoosh down a wire.

Burton had taken grandson River to the children’s course.  Granddaughters Alexis, Camryn and Lindsay and grandson Hunter had left me behind.  I scanned the tortures ahead.  The next challenge had an escape ladder down the side.  I took it, then asked directions to the big zip line.  Once I rode it, a red shirted guide warned, I’d be finished with the course.

The zip line launch platform towered above 3 high ladders.  Each time I changed ladders, I had to detach and reattach the confounding hooks.  The apparatus I wore added weight to the climb and had to be hitched up with each rung.  Like a lumbering tortoise, I persevered.  Reaching the platform atop the 2nd ladder, I muttered to a fellow climber, “I’m in my freaking 70s.  What am I thinking?”

“You can do it,” she said, as though encouraging a kindergartner to tie her shoes.

I made it to the top and, yes, hooked up the gadgets once more and sailed down 650 feet, admiring blue sky and fluffy treetops.  The ascent probably took 15 minutes.  The descent, maybe 30 seconds.  But it was 30 glorious seconds and proof I’m not as old as my driver’s license claims. 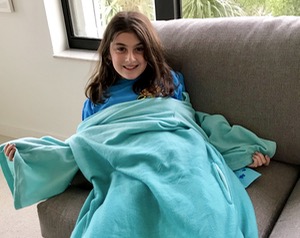 Camryn and her Snuggie.

It was the start of what proved a delightful grandkid-oriented last day of 2017. Burton stopped at Sam’s and gave each child $10 to spend.  Camryn, 11 (2nd oldest), found nothing she wanted.  I was proud of her for not blowing the money just because she could.  This is a girl who knows her mind.

She wanted a Snuggie (a soft blanket with sleeves), similar to one her older sister had.  Walgreens carried them.  Would Burton drive her to Walgreens?   Negative.  He was heading home for a nap.

Camryn turned to me and slung her arm around my shoulders.  “Gigi,” she said, in melodious notes approximating E and C on the musical scale.  “This would be great bonding time for us.”

We bonded over the choice between ombre turquoise or plaid.  What joy to have one grandchild all to myself.  I marveled, as I have before over Pet Rocks or River’s current fave Grossery Gang collectibles (Horrid Hamburger, Putrid Pizza, etc.), at what unknown magic turns somebody’s crazy idea into a fad everyone wants and a gold mine for its creator. 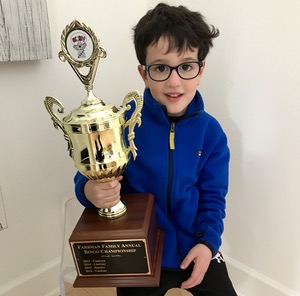 Fischer with the Bingo trophy.

After, Burton, the family fun-meister, called several rounds of Bingo.  Grandson Fischer, 5, was the big winner.  His name will be inscribed on the family Bingo trophy.  Fischer’s victory marked a much better day than the one before when he  banged his head on a glass table, requiring a trip to the ER and 4 staples.  River took credit for his little brother’s Bingo victory.  He said, “Last night, after Fischer hurt himself, I prayed for him.”  (Godsign awareness  in the 3rd generation.  Yeah!)

All in all, a fine end to a year of Bucket List adventures, including renewing our vows for our 50th anniversary along with the whole family and visiting art destinations Crystal Bridges and Marfa. ‎

Kabbalah, the tradition of Jewish mysticism, refers to God by 72 different names.  Each name has a numerical equivalent.  One of those names, Chai, means life.  The number for Chai is 18, considered a lucky number.  When giving a bar or bat mitzvah gift, checks are often written in increments of 18, such as $180.

May 2018 be a lucky year for all of us.  Wishing you lots of Bucket List and family moments.  L’Chaim!

And, one last note! If you think every one of our hopes will turn to good luck, here’s my final “shout out” to the grandkids … 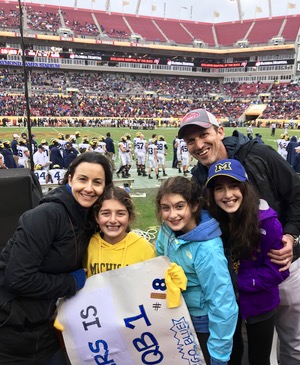 Despite Andy’s family’s encouragement, the Wolverines went down to defeat on New Years Day

11 thoughts on “Adventures and games bring family together”