Artist Mami Takahashi with her dome made of flexible, two-way mirror sheeting that allowed her to observe people staring at her. Care to see more images of her Hiding and Observing project? Simply click this image.

With immigration front and center in our national discourse, Mami Takahashi offers perceptive insights into the immigrant experience.  Mami moved to the US 6½ years ago.  She turned her initial sense of awkwardness and estrangement into imaginative artworks.

Aside: My sister invited me on a trip to southern Japan next fall.  My husband Burton is down on international travel.  I’m not.  Hiragana (“therefore” in Japanese), instead of playing golf one summer morning, I drove to Petoskey’s Crooked Tree Arts Center (CTAC) for a talk by Mami Takahashi. 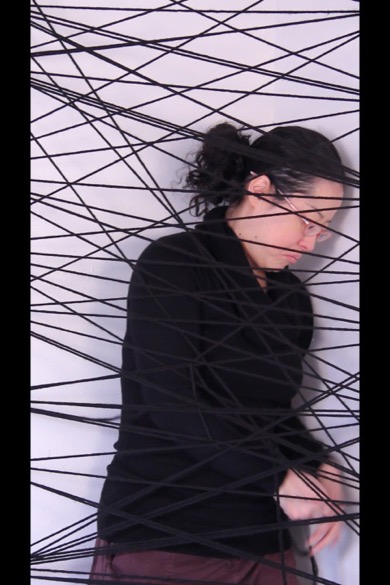 Artist Mami Takahashi begins to weave the lines that will separate her in Cage Mentalilty. Care to see the video of this project? Click on the photo..

According to the CTAC description, Mami’s an “interdisciplinary artist who integrates traditional and contemporary approaches in ideas, methods and media to address perspectives on foreignness and Americanness.”

By the time Mami finished, I understood what an imaginative and insightful talent she is.

Born in, Japan, with art degrees from 2 Japanese schools, Mami earned an MFA in Studio Practice at Portland State U in Oregon.  She’s now a research scholar at the U of O.  Her interest in differences between American and Japanese culture informs her work.

“Many people think Japanese people are shy because we tend not to look into peoples’ eyes,” she said.   “Looking into your eyes feels like too direct a communication.  Society pressures Japanese women to be shy.”

I was reading Daughters of the Samurai, a biography of the first 5 Japanese girls educated in the west, in the late 1800s.  Their experience reinforced  Mami’s claim.  According to the 18th c. Confucian-influenced treatise Onna Daigaku (“Greater Learning for Women”), “The only qualities that befit a woman are gentle obedience, chastity, mercy and quietness.”

Mami talked about what she called “individual versus groupness.”   She said, “In America, it’s important to be unique.  In Japan, we don’t want to stand out.”  When she first arrived in the states, Mami’s English was lacking.  She had few friends.   She was “frustrated” at school.  She felt her professors “pushed” her too hard to express her own uniqueness. “I was raised with a sense of group identity.”

She turned her dilemma into thoughtful conceptual artworks.

To represent her sense of being invisible, an outsider, she created a capsule made of 2-way mirror film.  She sat beneath it with a video camera, recording the responses of passersby. 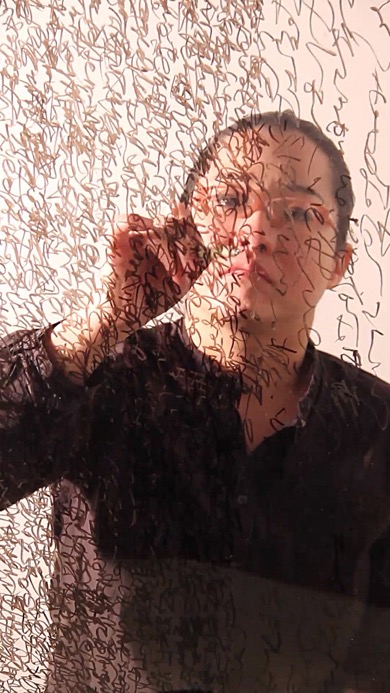 Mami Takahashi writes on the film that separates her from viewers. Care to see the video of this project? Click on the image.

For another video, she stood behind a piece of clear film and wrote in Japanese, over and over, “I hate this school.”  Her face vanished behind the words.  Her professors didn’t know what she was writing.

Mami also expressed her sense of “cage mentality”—a famous phrase from popular Japanese novelist Riichi Yokomitsu.  Mami stood in a corner of her studio and looped yarn over and over a frame until she disappeared behind a scrim of yarn.

Mami spoke about the different sense of art appreciation between the cultures.  Japanese value traditional art; in the U.S., “contemporary art is dominant.”   She showed a slide of a lovely Japanese gold leaf flowered screen followed by an image of conceptual artist Marcel DuChamp’s first “readymade.”  His urinal, displayed as art 1912, dramatically changed art history.  Japanese consider craft and art to be equal in worth, she said.  Americans value “fine” art over craft.

Mami referenced a cultural difference in theater as well.  The Noh musical drama, popular since the 14th c., is performed by men wearing masks.  “The Japanese concept is to give up your own identity to perform.”  In Japan, she says, “I learned a skill set of losing my identity.”   American theater, on the other hand, “encourages actors to create their own interpretation of a character.”

She mentioned other differences.  In Japan, at 5’1”, she’s considered tall.  In America, she’s short.   In Japan, “being feminine is required.  In the US, many women—especially younger ones—aren’t comfortable with feminine expectations.”

From an artistic viewpoint, Mami’s work is influenced by the concept of Ma, or negative space.  According to Professor Google,* the word translates as “gap” or “pause.”  You likely first encountered Ma (other than she who birthed you) with the classic illustration of the white vase in a black rectangle.   When you focus on what surrounds the vase, you see 2 profiles.

Mami was in NoMI thanks to the Good Hart Artist Residency program, something about which I intend to learn more.  (And to share with you, dear reader.)  Thanks, Mami, for your thought provoking work and insights.  And for helping us to see each other more clearly.

*My sister’s term for Wikipedia.  Wish I’d thought of it.