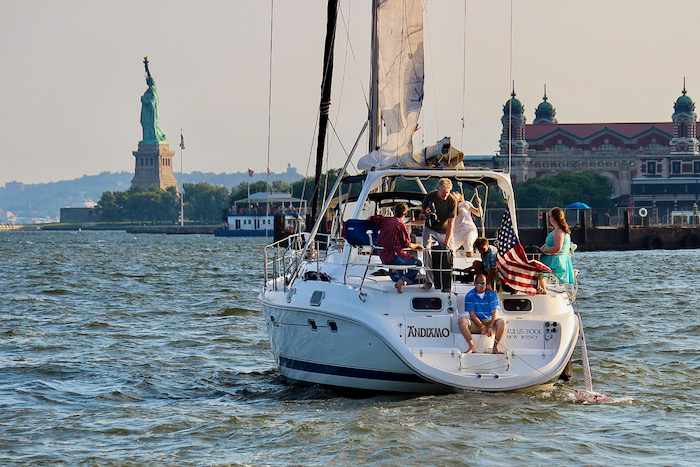 Kieth Famie and crew finally managed to get Maire Kent’s boat out into the Atlantic.

24-year old Maire Kent, a former U.S. Army PFC, died of cardiac sarcoma, a rare cancer of the heart, in 2013.  She touched thousands of hearts of people she never knew. 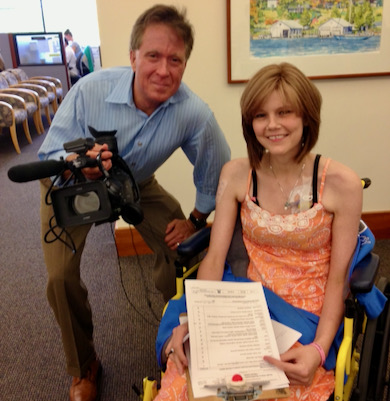 Maire (pronounced Mary), from Milford, MI, had read a book as a child. Paddle to the Sea, by Holling Clancy Holling, tells the story of a Native Canadian boy who creates a small wooden Indian in a canoe.  On the boat bottom, the boy carves, “Please put me back in water.  I am Paddle-To-The-Sea.”  The boat undergoes many trials, but after several years and five Great Lakes makes it to the Atlantic.

Remembering the book she once loved, Maire had a dying wish.  She wanted her ashes placed in a wooden sailboat that would travel to the ocean so she could “see the world.”  With much effort, her friend Keith Famie made her wish come true.

Personal note.  In the late 1980s, chef Keith Famie started Les Auteurs, a popular restaurant in Royal Oak, MI, where Burton and I often dined.  Among other awards, Esquire named Les Auteurs one of the “Best New Restaurants of 1988.”

Keith became a contestant on the TV show Survivor: The Australian Outback in year 2000.  After 42 days, he was voted out.  He turned his talents to producing videos of foods around the world and made specials for the Food Network from locations as exotic as Bora Bora to the fish markets of Seattle.  He formed his own video production company.

Some years later, chest pains took Keith to an onco-cardiologist, Dr. Monika Leja, at the U of M.  Keith mentioned he was working on a video about end-of-life issues, an 8-part series for PBS.  Monika introduced him to another patient, Maire Kent, then 23, as a possible subject for his film.  With a daughter the same age, Keith was apprehensive.  But the ringtone of Maire’s cellphone turned out to be the theme song from Clint Eastwood’s 1960 epic, “The Good, The Bad and The Ugly.”  A ringtone, Keith says, “you have to search for.”  It was Keith’s ringtone as well.

In his memoir, Living Through the Lens, Keith says he felt the ringtone coincidence meant “something beyond our control had brought us together.”  That, my friends, is what we call a GodSign.  Keith was even more convinced when that night, for the first time in weeks, the thumping sensation didn’t return to his chest.

Keith became friends with Maire, driving her to appointments and visiting her nursing home.  When he filmed Maire for his series, she said of her diagnosis, “At first, I was scared and terrified.  I wasn’t sure how to accept it. I’ve stayed awake at night and thought about what would happen to me.  How much longer would I have?  What was my bucket list?”

Maire’s dying wish was to be cremated and have her ashes put in a small boat which sailed from the Great Lakes to the Atlantic so she could “see the world.” 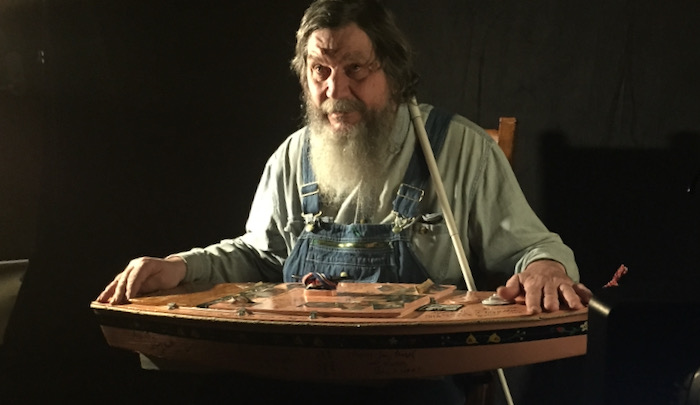 Keith had produced a video on and become friends with a blind carpenter, George Wurtzel, who years before attended the School for the Blind in Flint, MI, with Stevie Wonder.  As a child, George lost his sight from retinitis pigmentosa.  But nothing stopped him.  He’d become director of Camp Tuhsmeheta, a western Michigan camp that has a program for the visually impaired.

George told Keith, “When a new kid comes to Camp T… and we’d announce we’re going canoeing, sometimes the child would say, ’I can’t canoe—I’m blind.’  I’d tell him or her, ‘The reason you can’t canoe is not because you’re blind.  It’s because someone told you you can’t canoe.’”  Keith introduced Maire to George, who began crafting a three-and-a-half-foot sailboat.

Maire’s last days brought a sense of urgency to finish the sailboat that would carry her ashes to the sea.  George and Keith asked Maire to write a message to be printed on the sail and—in case the sail should break during the journey—on the body of the boat.  Shortly before she died, Maire penned her message:

“My name is Maire.  I died of sarcoma cancer.  My ashes are enclosed in this boat and I am on my way to the ocean.  If you find me, please set me back on my path.  I will bless you from Heaven.”

Maire died on September 27, 2013, among friends and family.  Keith was there filming and “bore witness to the value of hospice and how loved ones cared for Maire as she departed from our world.”

Keith scrambled to raise the funds to complete his video and fulfill Maire’s last wish.  He sold “anything I could think of” including his 25th anniversary Ironman racing bike from the triathlon he did in Kona.  “As any documentary filmmaker will tell you, the vision and passion for a story are necessities.  But without the cold, hard cash, the story may be just that and nothing more—a great idea.”

On July 12, 2014, Maire’s boat launched from the beach at Cross Village, MI, north of Harbor Springs, on Lake Michigan.

Maire’s journey took her from water to cars, trains and planes.

A troop of girl scouts from Alpena, MI, found Maire’s boat floating in weeds and released her. 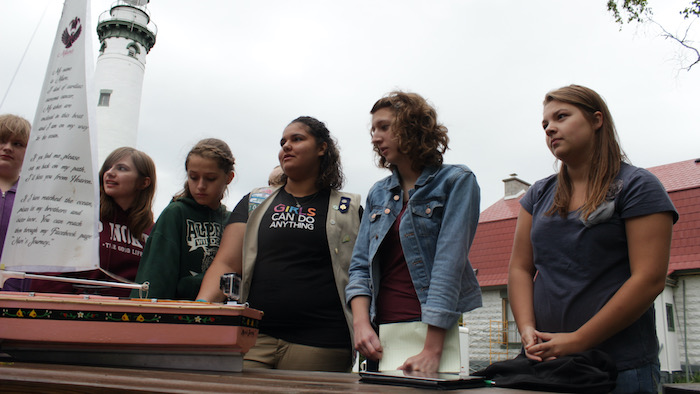 Maire’s boat with the Girl Scouts in Alpena.

Her boat rode through the streets of Detroit in the side car of a motorcycle procession of four Vietnam Vets. 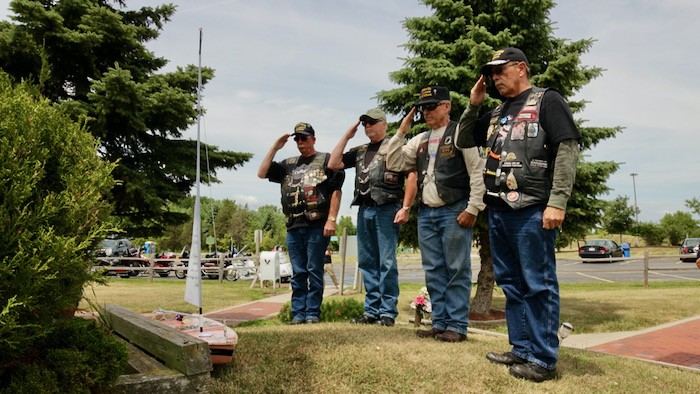 The four Vietnam veterans who carried Maire’s boat through Detroit.

“After an array of encounters and some close calls with nature, Maire reached New York City and eventually found herself being towed out to sea at sunset, south of the Statue of Liberty.” Keith filmed the conclusion of Maire’s voyage from a big sailboat trailed by two chase boats.  “With our cameras rolling, Maire’s ashes were released into the ocean, just as she had hoped.”

Keith’s documentary, Maire’s Journey, showed at several film festivals.   Thanks to the support of Drs. Kim Eagle and Monika Leja, Maire’s boat is now on permanent display at the U of M Frankel Cardiovascular Center.  During the Covid pandemic, Keith rewrote the script he authored in 2014 and is currently shopping it in L.A.  With any luck, the world may come to know Maire’s story. 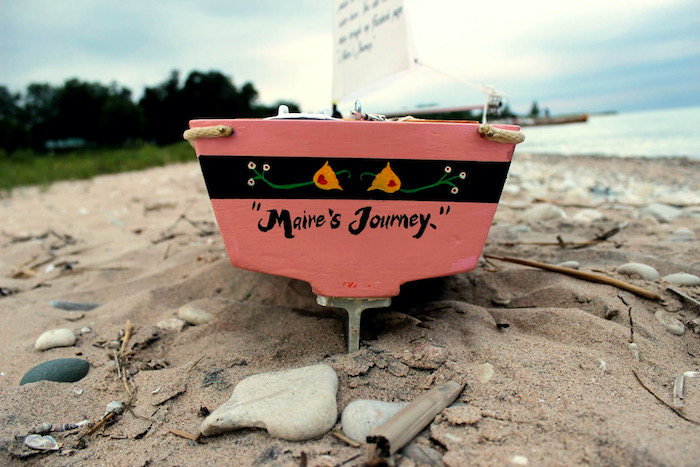 Thanks, Keith, for all you did to fulfill one special young woman’s last wish.  And for sharing the good, the bad and the ugly of a beautiful story.

Care to read (and see) more? 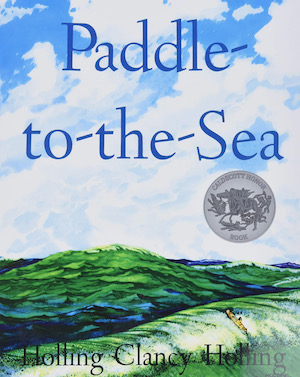 THIS JOURNEY really started in Chicago before World War II with the passion of Holling Clancy Holling to get children interested in the natural world. Holling was born in Michigan, but studied at the Art Institute of Chicago and then worked at the Field Museum of Natural History. Outside work, his vocation was to produce colorful children’s books that would draw families toward the wonders of the natural world—and the first peoples to live in North America.

Paddle to the Sea appeared in 1941 just before World War II, which was auspicious because an interest in colorful children’s books boomed during the war years when the materials used in many children’s toys were rationed. The book was honored with a prestigious Caledcott Honor.

If you are intrigued by Holling’s work, many of his delightful books are still available. You may also want to look at Minn of the Mississippi, which follows a turtle down the big river, and Pagoo about a crab in a tide pool.

This year, 2021, is the 80th anniversary of the original Paddle to the Sea, which has taken on a whole life far larger than the original hardback, including locations along the fictional boat’s journey that are marked today in locations around the Great Lakes. 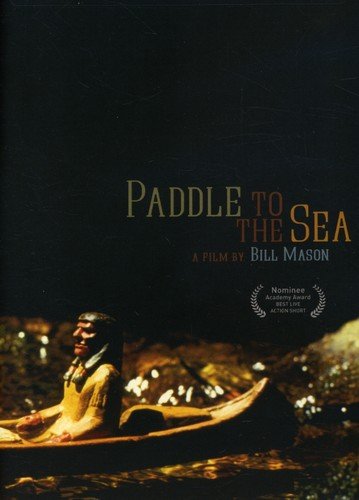 Click the cover to visit the Criterion DVD’s Amazon page.

The next huge leap in Paddle’s journey was the commitment of the famed Canadian naturalist, author and filmmaker Bill Mason to create a movie version of the little canoe’s journey. While largely unknown in the U.S., Mason is revered in his homeland, including a Canadian postage stamp honoring him in 1998, a decade after his death.

Mason’s approach to retelling the story on film is now a legendary story of a low-budget filmmaker strategically planning each step. Mason even spent time training to become an expert wood carver so he could personally make all the versions of the boat needed for the filming. In some cases, Mason and friends even defied posted limits along the waterways and risked their safety more than once to achieve some of the most dramatic shots.

In 2008, the 20th anniversary of Mason’s death, the prestigious Criterion Collection released a fully restored version of his film on DVD.

Perhaps in the future, we will see Keith Famie’s next chapter in the Paddle journey.

One thought on “At the 80th anniversary of ‘Paddle to the Sea,’ here’s the epic journey of filmmaker Keith Famie and veteran Maire Kent”