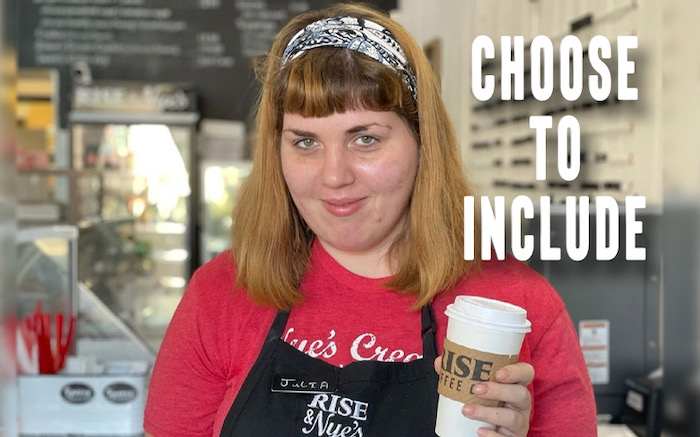 Julia is one of the employees at the Rise and Nye’s coffee an ice cream shop.

The caring nature of people who gravitate to Sarasota amazes me.  A recent discovery: Beaver Shriver.  Beaver moved here with wife Erin and daughter Vivienne eight years ago and launched an unlikely business.  Beaver’s become a downtown hero, though he’d no doubt cringe over the accolade. 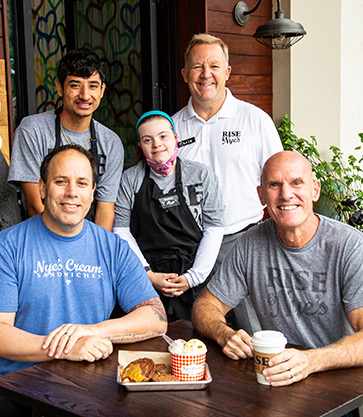 Beaver at lower right with some of the team behind Rise and Nye’s.

Beaver opened a coffee and ice cream shop staffed by people with intellectual and developmental disabilities, ages 16 to 53.  Since Rise & Nye’s began 1½  years ago, the shop, next to Brick’s Smoked Meats, has become a popular destination.

Beaver and wife Erin are independent thinkers.  Daughter Vivienne inherited their unconventional bent.  At 10, she objected to attending school.  Her parents asked what she’d rather do.  Though Beaver graduated from a prestigious prep school (Exeter) and Ivy League college (Dartmouth), he and Erin decided formal schooling wasn’t for everyone.  Erin cautioned Vivienne, “You realize giving up school means no more gym; no more art class.“

OK, her parents said.  What do you want to do?

Since fifth grade, Vivienne has been what Beaver calls “unschooled.”  Vivienne decided to learn Japanese.  She now speaks, writes and reads Japanese.  She became a scholar of Gothic architecture and Tiffany glass.  She’s a skilled photographer.  She’s also a popular barista at Rise & Nye’s.

The Shrivers moved to Sarasota from Pittsburgh.  “I wanted to retire my snow scraper,” Beaver says.

Beaver had served on philanthropic boards and volunteered for non-profits for years.  Erin  runs her own nonprofit, Shriver Education for the Arts.  A feature program, Big Magic Studios, offers an opportunity for intellectually and developmentally disabled people to create artistic products like scarves and product labels. 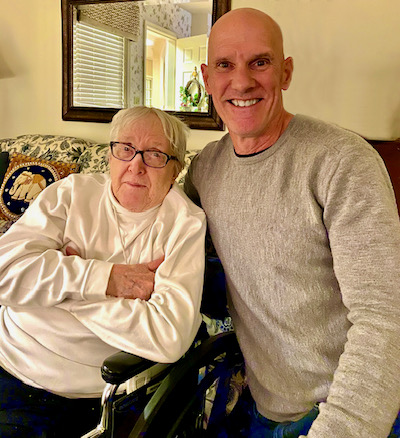 Alden Shriver, a true Giver, has been an inspiration for her son, Beaver

Beaver inherited his philanthropic streak from his mother, Alden, now 90, dealing with dementia.  Alden was a piano teacher and “a big influence” on her son.  One of Alden’s students, Barry, was autistic.  Nonetheless, since age six, Barry and Beaver were best friends.  “At a time when most autistic kids were hidden or institutionalized, Barry’s mom insisted he live like any other kid.”  That included playing with friends, golf and tennis, going to restaurants, the movies and job hunting.  Barry grew up to become a custodian at a VA hospital and still works there, 48 years later.  But Beaver says 80% of Barry’s friends with autism, Down syndrome and other disabilities couldn’t find a job.

The unemployment rate for intellectually and developmentally challenged people is 20 times greater than for the overall population, Beaver says.  He considers that figure a shame.  He knows how effective such people can be as employees.  Beaver pays his staff “more than” minimum wage.  Employees share their tips, which can be generous when they get to know regular customers.  Several employees take SCAT busses to work.  During quiet times, staff members write encouraging quotes on coffee cups.

“My hope is our patrons will develop a relationship with our staff and will hire them,” Beaver says.  Though that hasn’t happened yet, he’s still hoping.  (A local restaurant has shown interest in hiring Rise & Nye’s employees as bussers.)

Beaver and Adam, who has autism, speak at various organizations when opportunities arise.  Beaver credits the Haven of Sarasota and Easter Seals for helping to  normalize the lives of kids and adults with disabilities and for helping to train them as workers.  Beaver believes virtual reality can help people with autism adapt to environments.  Wearing virtual headsets familiarized some employees with Rise & Nye’s during the pandemic.

Beaver inherited his philanthropic nature, and not just from his mom.  Beaver’s also a descendant of Eunice Kennedy Shriver, founder of the Special Olympics.

Beaver concedes his coffee and ice cream business has a long way to go in Sarasota.  But he’s gratified by the progress they have made.  He points to Julia, Rise & Nye’s first employee.  Julia was asked what she most enjoys about working for Rise & Nye’s.

Beaver encourages friends to follow Rise and Nye’s on Instagram. Their 201 posts, as of today, have drawn more than 2,500 followes. 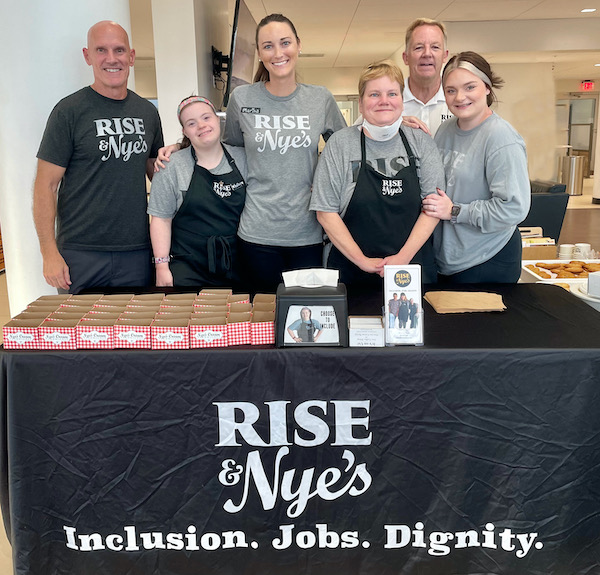