At a time when so many of us are suffering losses, the late Judy Stafford manages to bring comfort.

Judy died 6 months ago.  Way too soon for the family, church members and community who adored her.   Judy was choir director of Williamsville United Methodist Church outside Buffalo, NY, and “the backbone of our family,” Candy says.

3 generations of family, including 12 grandchildren, lived within a few blocks of each other. Judy’s  packed schedule included hosting frequent family dinners for 25.  Judy and her sister Wendy were superb pianists.  Their church started the 2 Sisters Foundation to honor the sisters’ over 30 years of service.   Judy was Candy’s best friend. 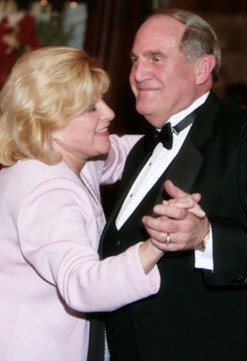 Every summer, Judy and husband Dave threw a pool party for 80 family and friends.  Judy entertained guests playing the piano and singing songs with lyrics she revised.  Such as a spoof about church donations “… Each time we turn around they’re asking for more.  We throw it in the plate/ And it evaporates…”

Judy was working on a memoir she hoped might someday interest her grandchildren.  She wrote about her 6 year on-and-off relationship with Dave.  She and her date and Dave and his date saw a movie and returned to Dave’s apartment.  She went into the kitchen to help Dave fix drinks.  Dave said he’d heard she was engaged.  Was she happy?  “I suddenly burst into tears and said, ‘No, I still love you.’”  She broke off the engagement; gave back “a very impressive solitaire.”

Judy’s unfinished memoir ends with her sitting in her and Dave’s first house—a “fixer upper” Cape Cod.  She’s holding baby Marc on her shoulder “…looking out the picture window at our lovely street.  I thought I was the luckiest girl in the world! Then Marc threw up down the back of my shirt…”

Despite her talent, humor and spunk, Judy was diagnosed with stage 4 pancreatic adenocarcinoma last year.  Roswell Cancer Center told her chemo might buy her 2 more months.  Judy said: Bring it on.  She lost her hair, her stomach swelled up.  But she stayed alive to care for Dave who died of COPD.  Judy died 2 weeks later.  She was 70.

Members of the Buffalo Philharmonic played at the memorial service.  Judy’s choir was so respected that the associate director of the Buffalo Philharmonic belonged and had accompanied her on organ or piano many times.   Judy’s brother Ron gave her eulogy.  Speaking of Judy’s devotion to Dave despite her weakened condition, Ron said, “I don’t know, on Judgment Day, if there will be long lines of people waiting to get into Heaven.  But if there are, Judy was in the TSA Precheck Express line and didn’t have to wait at all.”

In October, a week after Judy’s service, Candy and Ron took time off from the heartbreak at their condo on Siesta Key in Sarasota.  Candy was sitting on the sofa, knitting.  She heard a knocking on the window.  She looked up.  A striped woodpecker perched on the ledge.  She walked to the window and took a photo.  “Judy?” she asked.   She later learned black and white stripes are a symbol for neuro-endocrine cancers.  (Candy feels great but has recently been treated for neuro-endocrine pancreatic cancer.)

Candy mentioned the bird visit to her girlfriend Diane Falso.  Diane told her to look for pennies and/or flickering lights as signs from Judy.  “I didn’t listen,” Candy says.  “I didn’t believe in that malarkey.”

Soon she changed her mind.

A talented knitter, Candy designs patterns she sells on her own website www.candylou.com.  And on Instagram (@candyloucreations).  She creates photo shoots promoting her designs.  3 weeks after Judy died, Candy set up a display of her knitting on a patio table she styled with candles and shells.  She posted a shot to Instagram.   Minutes later, she returned to the patio.  A shiny penny sat on the tabletop.  She asked husband Ron if he’d put it there.  He shook his head.  He hadn’t been outside.

Candy studied her photos.  No penny in any of them.

Ron had gone to work.  The Watsons’ border collie, Abby, tracked in mud.  Candy vacuumed and washed the floor, then went out for groceries.  When she returned, a penny lay on the floor of the back hall.  Candy told Diane about the pennies.  Diane advised, “You need to be receptive.”

Days later, Candy vacuumed her closet.  When she returned, a penny sat on the closet floor.  She told Diane about the episodes.  Diane said, “When someone you love dies, they exist as pure energy.  They look for ways to let you know they’re still here.”

Dining at their local club with the family, Candy said to Wendy, “The idea of life after death is part of our religion.  I guess I shouldn’t be so skeptical.”   Minutes later, lights above the table started flickering.  They flickered for about 5 minutes.   Over the next few days, lights in the Watsons’ family room flickered periodically.  “Ron and I would say, ‘Hi, Judy.’”

The weekend after Thanksgiving, Candy and Ron set up their Christmas tree.  After, as they watched TV, the lights on the tree “flickered like crazy.”  Candy says they were “too lazy” to jiggle the cord.

Just then the lights stopped flickering.

After Judy died, her daughter Jenn posted a message on Facebook.  “When my glorious mother was given a short time left, she didn’t crumple up like she could have.  No, she got out a yellow pad and started making her to do list.”  That list included organizing her 7th cookbook.  Jenn’s post concludes:   “She got most of it done and Wendy valiantly finished the rest.  We are selling them for $10 as mom had wanted.”  Judy’s latest and last cookbook benefits the Two Sisters Foundation. 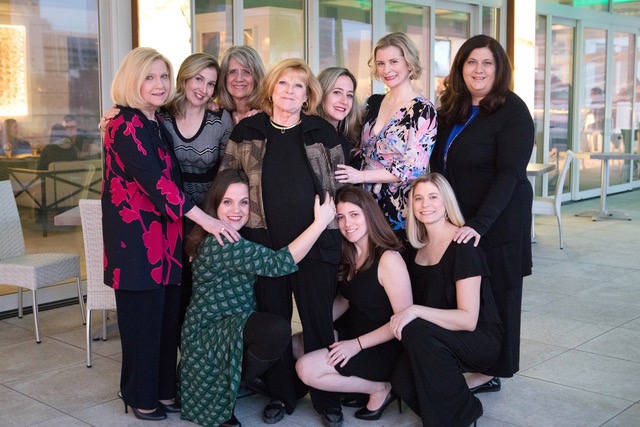 Last Christmas, Candy and Ron hosted the family Christmas dinner.  The dining room of their house overlooks the front porch.  Ron had hung icicle lights on the porch and bushes.  “We’re known for the worst lights on the street,” Candy says.  “We’re a neighborhood joke.”   Sitting around the table, Candy was telling the family about the pennies and flickering lights she’d experienced.

“All of a sudden all the outside lights turned off.  Every 4 or 5 seconds, they’d turn on or off.  The little kids were all screaming: On!  Off!  On!  Off!  It lasted about 10 minutes.  We were all crying and laughing and saying ‘Judy’s here’.   And we were all there to see it.”

Candy’s friend Diane sent her a book called Signs.  Author Laura Lynne Jackson discusses the notion of “crossing over” and how to connect with a lost loved one.  Jackson  advises the reader to pick something unusual and ask the deceased to somehow show it to her.

Judy loved coming home and putting on her red robe to watch TV.  And Judy’s choir robe was  red.  Candy asked Judy to show her a red robe.

A few days passed without a sign.  Ron and Candy spent a weekend at their cottage.  The TV was on, but Candy, busy knitting, paid no attention.  Ron and brother-in-law Paul were watching “Patton.”   The cabin lights started flickering.

Just after, Ron turned up the volume on the TV, causing Candy, who’s hard of hearing, to look up.   Patton (George C. Scott) said he’d been re-reading Caesar’s Commentaries.  To distinguish himself from his men in battle, Patton said, Caesar had worn a red robe.

David Kessler, an expert on hospice and palliative care, was a colleague of Elisabeth Kubler-Ross.  (She wrote about the 5 Stages of Grief:  denial, anger, depression, bargaining, acceptance.)  Kessler, who lost a young son, believes there’s a 6th stage: meaning.  Gratitude for the meaningful moments we’ve shared with a loved one and for what we’ve learned from them.  In Judy Stafford’s case, I’d guess the meaning she brought to so many others is the joy in life she felt and shared.

Thanks, Candy, for introducing us to your joyful, red-robed sister-in-law.  Thanks, Judy, for the idea of writing down your memories.  It’s something we might all consider doing during these long days at home.  Thanks, too, for the pennies from heaven and the light you bring.  We can all use a little more hope. 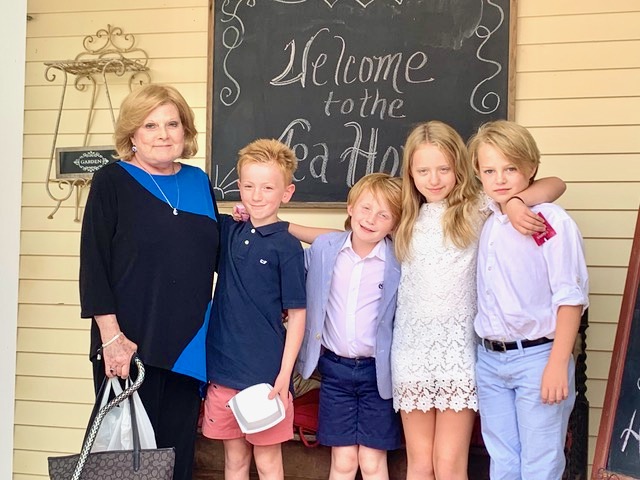 Judy with her grandchildren.

12 thoughts on “Beloved choir director Judy Stafford, though no longer on this earth, brings hope to sister-in-law and knitting pro Candy Watson and others”