Rita Dunker and her daughters.

Rita grew up in post-war Germany in Weseke, a rural town of under 2,000 on the Dutch border. Her father had been pulled out of school and drafted into the Nazi German army at 16.  “He had no choice,”  his daughter says.  His brother was drafted, too, and died in the war.  “It was a very oppressive time,” Rita says.

During and after the war, famine was rampant.  Even in the 1960s, the country was still recovering from destruction and shortage of supplies.  The family lived on fruits and vegetables from their garden and meat from their own livestock.  In the early 1970s, the Dunkers still lacked a refrigerator and TV.  Nor did they have a pet.  Rita says, “The only animals I knew were farm animals we’d slaughter and eat.”

That would change.  Years later, as an adult living in Birmingham, MI, Rita’s in charge of around 100 dogs. 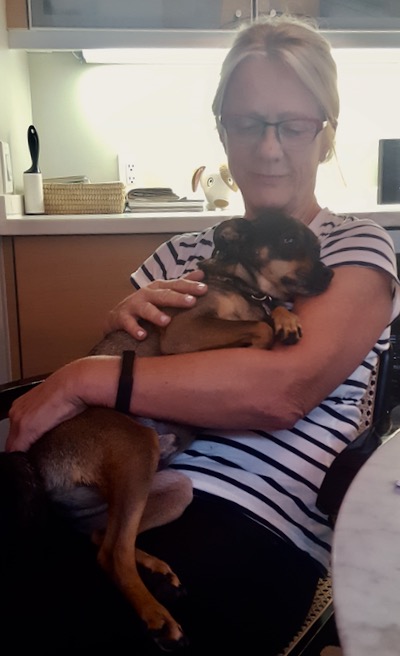 How this came to be is a saga…

In her teens, Rita loved France and studied French.  After WWII, when France and Germany were adversaries, the governments of both countries introduced a policy of rapprochement, or reconciliation, through youth exchange programs.  Wishing to leave her village, Rita grew interested in international relations.  In 1982, a businessman from Detroit hired her to start and run a division of his company in Germany, dealing in low carbon iron.

Divorced with full custody of 2 young daughters, Rita became romantically involved with her boss, Gary.  They  dated for 2 years “until he convinced me to come to America.”

In 1991, Rita moved to the US with her daughters and applied for a green card, enabling them to stay in the US.  She and Gary married.  Gary was Jewish.  The move proved an adjustment.  Rita says of her  generation, “We were born after the Holocaust but still felt a lot of guilt.”  When she first moved to America and into a Jewish community, she says, “I didn’t know how to address my past.  I felt very uncomfortable.  Still, it was my history.  I had to own it.”

Rita became friends with many Jews; she worked to connect Jewish contacts to the growing German business community.  In 2002, the president of Germany came to the US on his way to the Salt Lake City  Olympics.  He spent 2 days in Detroit.  Rita organized his visit and included a trip to the Holocaust Memorial Center. 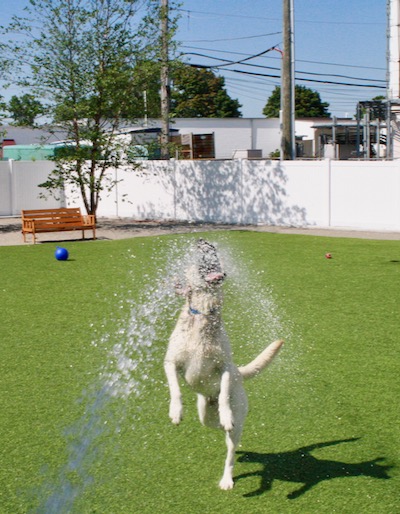 Rita faced a predicament.   Her daughters were teenagers.  She wanted to put them through college.  She needed an income.   She spent a year researching business ideas on the internet.  Her daughters, Laura and Imke, loved animals.  Laura longed to, and eventually did, become a veterinarian.  (Caregiving’s in the family DNA.  Imke became a nurse.)

Influenced by Laura’s love of animals, Rita adopted a rescue dog from the Michigan Humane Society in 2005. Laura applied to vet school at MSU but was declined.  “She was devastated,” Rita says.  Her daughter’s disappointment put dogs on Rita’s radar.  She looked into creating a facility to board animals.  She realized most such facilities were “dirty, smelly and crowded.”  She decided to create a better mousetrap, or dog house, to be specific.

Rita wanted to create a home away from home for dogs, reflecting the changing dynamics in dog/owner relationships.  “Dogs are members of the family,” Rita says.  “They need appropriate care and attention instead of just being tucked away.”

It was 2010.  The middle of an economic downturn.  Still, she says, “It never dawned on me that I could fail.”  She invested all the money she had and borrowed the rest.  She’s “still friends” with her loan officer from Comerica Bank who “came up with creative ways to finance the project.”  Rita drove many miles investigating locations, eventually deciding on an industrial area in suburban Troy, MI.   She obtained rezoning approval.  The city wanted her to provide more parking spots; she objected, preferring to save square footage for dog play area.  Rita was determined to provide 60sf, inside and out, per animal.  “The main goal was to give dogs room to run around and enjoy their freedom.” 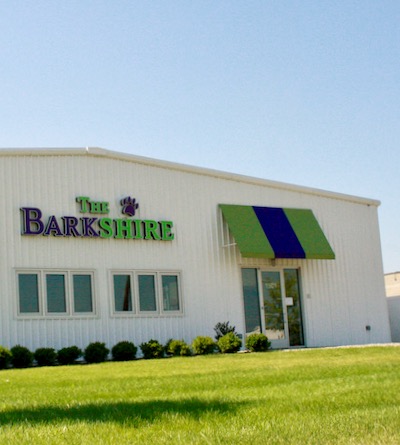 Rita estimates she spent about $1.5 million to get into business, including buying the building.   She opened The Barkshire (love the ritzy name) in 2011.  Despite what she calls “obstacles,” the business has grown steadily.  The Barkshire gains new clients every day.  (As with every good idea, others follow.  There are now at least 10 competitors within 10 miles.)

“We want our dogs to enjoy themselves.  Some play; some just watch others play.  The Barkshire is like a kindergarten or an overnight camp for dogs.”

The Barkshire provides day care and overnight boarding.  One of Rita’s favorite clients was Tommy, a German Shepherd.   Two days a week, Tommy would take his leash in his mouth, stand by the door to the garage in his house and jump into the car.  His owner drove him to the Barkshire where he proceeded straight to his group of doggie pals.

Her first 2 years in business were “really hard” Rita says.  “I placed a lot of trust in some people who didn’t prove trustworthy.”  One tried to sue her, but the judge ruled in Rita’s favor.  It took time to develop her staff, but she now has “a solid team.”  One employee has been with her from the start.  Her staff numbers 18.  She’s “the company mom.”

A tough part of the job is losing clients that don’t live long compared to humans.  “We hug our dogs and lie on the ground with them.  Over 8 years, we’ve lost a lot of them.  Our break room is plastered with their photos.”

Her favorite dog?  “I love pit bulls,” she says.  “Some people train them to be vicious, but those we accept go through a temperament test.  Often they’re rescued from abusive situations, trained for fighting with their ears clipped.  But they’ll roll on their backs in a sign of submission.  Socializing at The Barkshire gives them a chance to become normal.  So many dogs need help.”

Rita’s own pet is Dolfi, a pinscher/Chihuahua mix.  Found in the street with a broken leg, he was brought to a veterinary clinic where he underwent surgery, then waited 3 months to be rescued.  Rita was “drawn to his sad eyes.”

Rita’s parents spent their lives in Weseke.  They died in 2001 and 2003.  Rita’s father didn’t talk about his experiences as a young man in Nazi Germany until 5 years before he died at age 79.  When he finally did, she says, he cried.   “People of that generation weren’t used to showing their emotions.”

Rita appreciates seeing her homeland take responsibility for its past.  “There are monuments to Germany’s shame all over the country, especially in Berlin.  The memorials make me feel like Germany has found its soul again.”

The Barkshire has brought Rita “a nice, happy life,” she says.  “It’s amazing how people can find happiness again.  But the stars have to align.  A lot of people struggle and things never fall into place.  I got lucky.  It worked out.”

100 dogs and dozens of dog owners are glad it did.  Thanks, Rita, for sharing your story.  And for the canine contentment you bring. 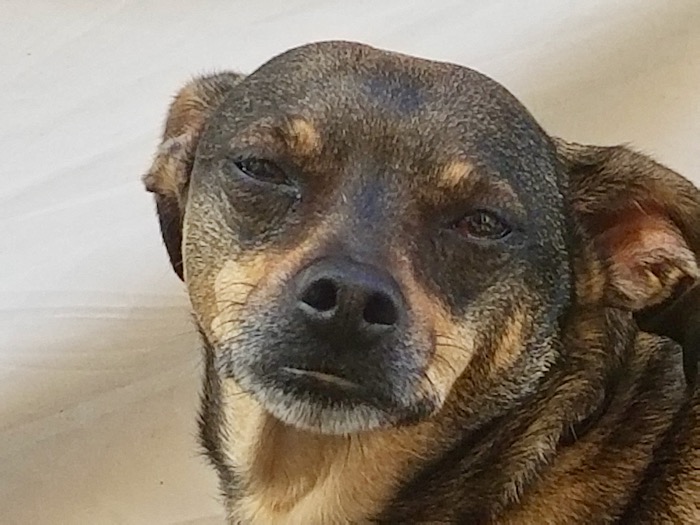 One thought on “Born in Germany, Rita Dunker creates a happy home for lucky dogs in Detroit”