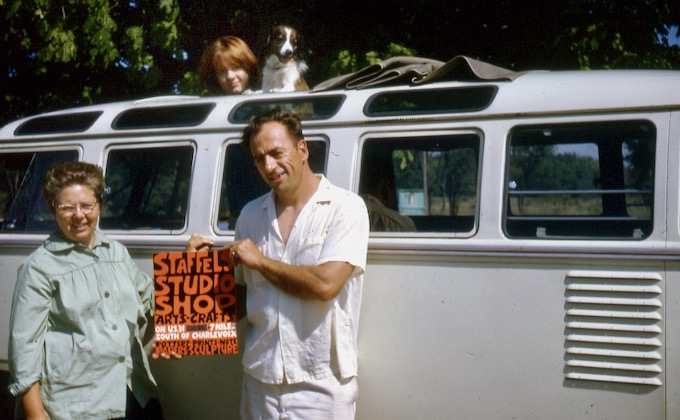 A LONG AND WINDING ROAD—Bonnie and Bill Staffel head out on a journey in the 1960s with their daughter and Marell and Skippy peeking out of the roof.

Cremation surpasses burial these days.  The National Funeral Directors Assoc. predicts it will reach 80% by 2035.  Survivors scatter ashes in ways that reflect the life of their loved one. Andrew Leith dipped moistened golf balls into stepfather Doug Leith’s ashes and hit the balls into Lake Huron, propelling Doug into eternity by means of one of his favorite activities (if you missed it, here’s a link to that column).

Marell Staffel of Charlevoix, MI, came up with another creative final resting place for her father, Bill. 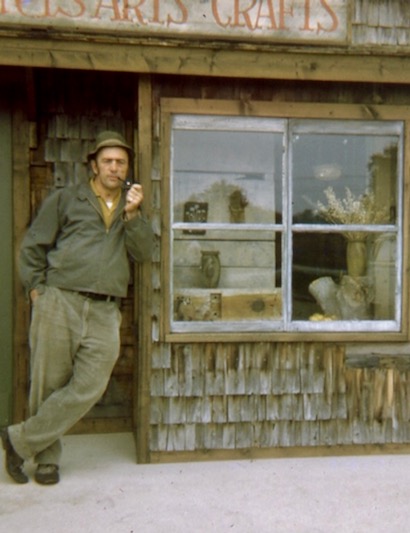 Bill and Bonnie Staffel, Marell’s parents, were artists in Maumee, Ohio. In 1961, they entered an annual juried art fair in Charlevoix, MI. The Charlevoix Art Fair has grown significantly since that 3rd one.  On the 2nd Saturday in August, it now features about 120 artists and draws over 25,000 visitors to a picturesque park overlooking the harbor.

The Staffels, like many of us, were enchanted by the beauty of the area. They bought an old farmhouse in the country north of town and set up a pottery studio. In the late ’60s, when Burton and I began coming to Charlevoix, we visited Staffel’s Pottery. Today the home’s occupied by the Cycling Salamander Gallery.

When Bonnie and Bill first bought in Charlevoix, she spent summers in northern MI; Bill visited on weekends.  In Ohio, he held jobs designing plaster wall plaques, instructional diagrams, Halloween masks.  But his heart was in Charlevoix, and eventually he moved Up North full time, helping Bonnie to run her pottery business. 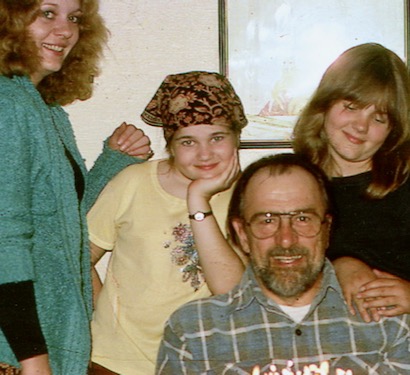 Marell and her daughters Heather and Shannon with Grampa, 1980

For Bonnie’s studio, Bill designed and built a lift with pulleys to move objects up and down for storage.  Bill also created a small door by which wood could be brought in for the fireplace.   Marell recalls, “Every kid got to ride on my father’s elevator and crawl through the little door.  My father loved kids and made everything fun for them.”

Children loved Bill, Marell says,  because “he really listened to them.”  In his later years, Bill received a letter from Brian, a  childhood friend of Marell.  Brian thanked Bill for teaching him so much.  He wrote, “You took the time to explain things.  You told me about the stars.”

Bill loved nature and animals and especially enjoyed watching deer play in the field behind his house.  He began building a shed near the pond behind their home.  Marell says her father only worked on the shed during the fall hunting season, hammering loudly to warn the deer to skedaddle.

Bill loved discards.  In the ‘60s, he wanted some spikes from the railroad bridge being torn down.  Marell, then a waitress at the Grey Gables, enlisted the help of Dave Phillips, a chef at the restaurant.  Bill and Dave filled the trunk of an “ancient” blue Ford Mustang with so many iron spikes that the car dragged on the ground.  Her father turned the spikes into “beautiful” letter openers, Marell says.. 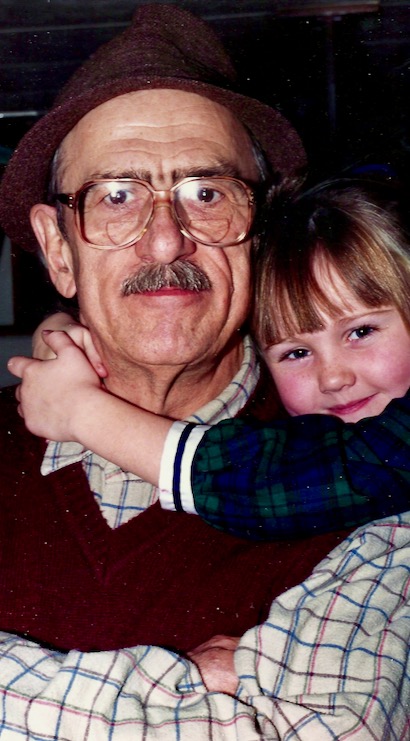 Bill with his great granddaughter Alex

Bill was a blacksmith who created iron hardware and fixtures.  He made artworks from found materials.  He designed logos for the Crooked Tree Art Center and the Charlevoix Art Fair, both of which are  still used today.

In his last years, Bill suffered from dementia.  But when with his buddy Joe, he remembered all their escapades, including the time they spotted a house being remodeled.  Wood pillars had been discarded.  They were too good to pass up.  Bill and Joe rescued them, cut them into sections, painted them and turned them into containers.

Bill spent the last 5 years of his life living with Marell.  Bonnie, now 97, and divorced from Bill, lived with her, too, as did Marell’s daughter and teenage grandson.

The funeral home director, Ron Winchester, asked if Marell would like to transfer her dad’s ashes to one of her mother’s pots.  She said,  “The last thing my father would want would be to spend eternity entombed in one of my mother’s pots.”   Wondering what to do with the ashes, she came up with the perfect resting place.  She put them into one of the scavenged containers Bill had painted.

Bill liked sweets.  After he died, one of his caregivers stopped by Marell’s shop, Picture This, a photo and framing business in the Olesons Shopping Plaza in Charlevoix.  The caregiver had kept candy in her car for Bill.  She handed Marell an unopened bag of M&Ms and a box of Good & Plentys.  Marell kept them on a shelf in her shop.

In January, 2018, a fire broke out in a nearby restaurant.  Picture This suffered smoke and water damage.  After, Marell was relieved to see the plastic bag with Bill’s candy remained unharmed.  She brought the candy home and created a little memorial for her dad. The container Bill painted sits with his ashes on a shelf in Marell’s home.  Beside it:  the 2 boxes of candy, 2 iron spike letter openers and a cd of Leon Redbone, one of Bill’s favorite musicians.

Joe, the friend with whom Bill had once scavenged pillars, has since moved to North Carolina.  On a recent visit north, he stopped by.  Marell put the container of Bill’s ashes on the coffee table and sat talking to Joe.  When her dad’s old buddy left, he reached over and patted the container.   He said, “See you later, Bill.”

A sweet story, in more than one way.  Thanks for sharing, Marell.  May your father rest in peace… in a piece of his own.