“At times our own light goes out and is rekindled by a spark from another person.  Each of us has cause to think with deep gratitude of those who have lighted the flame within us.”
Albert Schweitzer 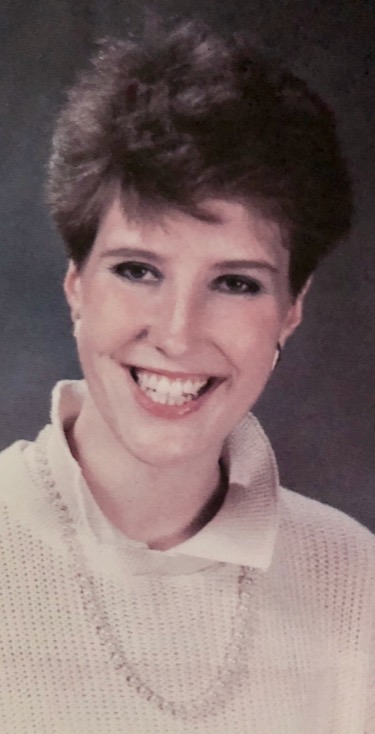 This is a Tale of Two Sisters. Of the best and worst of times.  A story about an amazing girl who, given a terminal diagnosis, focused on living.  And the little sister who still counts on her.

It was 1982.  At 12, in 8th grade, Roseanne took advanced algebra and French, played the oboe and piano, swam for an award winning school team.  She didn’t feel well.  Adolescent female problems, her doc said.  Her symptoms worsened.  Her mother, also named Roseanne, took her to Chicago’s Children’s Memorial.  Tests showed intestinal blockage.  Surgery was scheduled for the next day.  The night before, Roseanne asked to see a priest.

A priest came at midnight to give her the sacraments and pray with her.

She underwent chemo and returned to school.  Her father, James, says, “She kept playing her music and caught up on her studies through sheer grit.”  2 more surgeries and more chemo followed.  When Roseanne was due to graduate from junior high, the principal refused to let her march with her classmates.  She’d missed too much school.  Her father insisted, reminding  the principal his daughter had done the work.  Roseanne marched.  And traveled to France with her French class.

A year later, Roseanne was back in the hospital for more treatment.  She asked her doctor, “How long do I have?”

“I can’t say,” he replied.  In the few other cases he knew of, “the patients succumbed before now.”

That night at dinner, Roseanne repeated the doctor’s words.  She laughed, “He said, ‘succumbed.’  He couldn’t even say ‘died.’  I’ve made up my mind.  I’m going to make it to 16.  Sweet 16.”  Holding back tears, her mother asked, “Couldn’t you aim a little longer?”

In January, ‘87, Roseanne was a senior, a national merit finalist.  She’d been in every school musical, sung in the school chorus and been a champion debater.  She was admitted early to Notre Dame as a Notre Dame Scholar.   That Christmas she’d asked for a real Christmas tree.  After, the family went skiing in Colorado.  Roseanne spent the days resting in the lodge.   Back home, she admitted to more cramps and bleeding and suggested a check-up.

Cancer had returned, her doc said.  He sent her to Northwestern Hospital, where surgery was recommended.  Her father thanked the surgeon from Children’s for giving his daughter 4 more years.  The surgeon replied, “She gave them to herself.”

Roseanne, being Roseanne, had things she wanted to do before what would prove her last surgery.  She wanted to be home to celebrate her 18th birthday on January 26.  And she did, at a party with friends.  Then she visited Notre Dame where her brother played in the student pep band for a basketball game with #1 ranked North Carolina.  Roseanne watched Notre Dame pull off a stunning upset, then enjoyed birthday dinner with her family.  On the drive back, she insisted they stop to buy a flashlight.  She wanted to review for her next day’s AP physics test.

Surgery, a day after Rosanne’s physics test, was expected to last several hours.  Her mom and dad went to Mass.  When they returned, their daughter was already in her room.  Cancer had spread.  The surgeon had closed her up.  All medicine could do was keep her as comfortable as possible.  Her doctor, head of oncology at Northwestern, paid house calls.  Friends from Regina Dominican H.S. in Wilmette, IL, visited.  The Regina Chamber singers serenaded her.  When she lost her Kairos cross, a Loyola friend gave her his.

Roseanne voiced one regret—she’d be unable to graduate.  Her principal said Roseanne had completed enough credits.  The school mounted a special ceremony.  In front of friends and family and with classmates, Rosanne walked across the stage in cap and gown.  She graduated with honors, 3 months early.  After, she received a hand-written letter from Notre Dame’s Father Hesberg, saying she’d always be a member of the class of ‘91.

Less than a week later, on March 15, 1987, Rosanne died.  She had planned her funeral to be a celebration, and it was. In closing, her friends in the Regina Dominican Chamber chorus, wearing formal gowns, joined the church choir in singing Handel’s “Hallelujah Chorus.” 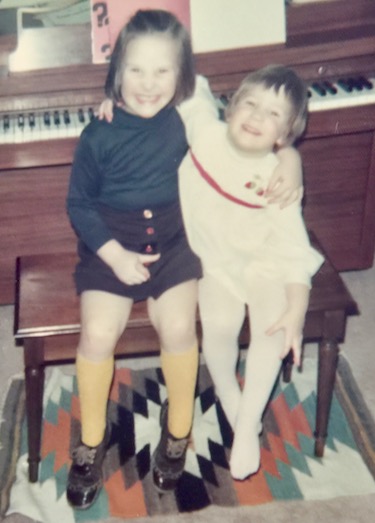 Roseanne and her little sister Maris as children.

Roseanne’s brother and sister survive her.  Her sister Maris, my friend, told me about Roseanne.  Maris grew up, married, and had 4 children, including 2 daughters.  Rather than name her first girl after her sister, Maris named her Emma Rosa and her second, Sophie Anne.  “I believe we’re all unique,” Maris says.  “I didn’t want my girls to have the burden of living up to anyone else.  I wanted them to shine on their own.”  (I might add: they do.)

Maris remembers snuggling in her sister’s bed with Roseanne shortly before she died.   Maris  wondered how she’d go on without her.  Rosanne said, “Just reach out your hand.  I’ll be there.”

“And she has been,” Maris reports.

Maris recently left her job as Director of Development of the new Great Lakes Center of the Arts at Bay Harbor in Petoskey, MI.  Believing daughter Sophie Anne needed a different academic environment, Maris asked her sister’s advice, recalled her sister’s courage and “took a leap of faith.”  She and Sophie moved back to IL.  Sophie will be a freshman at New Trier High School this fall—in the same class as my granddaughter Alexis.  Maris is pleased to have just become  Director of Philanthropy at Northwestern Medicine, the hospital where Rosanne was treated.

Maris sent me a copy of “Reflections,” a poem Roseanne wrote in response to a Monet painting.  The poem concludes:

New reflections bring new promises
Old reflections teach new lessons.
All reflections show our lives through others’ eyes
and give us something to reflect upon.

Thanks, Roseanne, for the lessons you still reflect,  for your legacy of grace.  Thanks, Maris, for honoring your amazing sister.  May we all live with such courage. 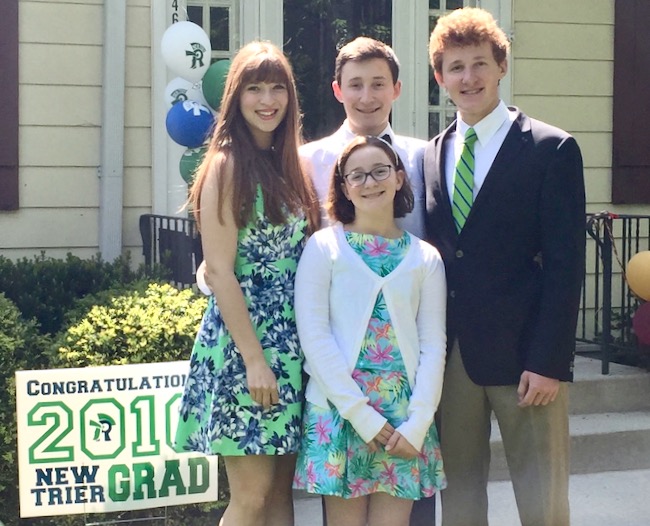 (Maris also sent me an essay her father James wrote about his daughter.  Titled A Promise Kept, It helped me understand Roseanne and is a gift to all who survive her.  Thanks, James.)

8 thoughts on “Facing cancer, Roseanne Harrington’s courage inspired many, including her sister”