In the midst of a health crisis, real friends show up in many ways.  When brain surgery shut down Burton’s left side, he could no longer walk.  My nurse friend Karen (you may enjoy some of my earlier columns about her) warned that hospitals are busy places, and that at night the nurse/patient ratio drops.  We wanted someone with Burton 24/7.

Girlfriend Lynne to the rescue.  She’s married to champion amateur golfer, Michael.  When Michael broke his leg, Lynne hired an aide to help him move around.  Michael is—shall we say—particular about his associates.

He liked his caregiver Fayez.   Lynne recommended him.

Sounds Muslim, I thought.  How’s that going to work?  But it turns out Fayez has worked for a few  Jewish patients.  We’re crazy about him.

Fayez changes tubes and bags, supervises meds, practices PT and OT with Burton, and seldom sits still.  He speeds back and forth from our library, now infirmary, to the kitchen or laundry room organizing, cleaning, checking, dispensing.  And he’s cheerful.  He and our nighttime angel Angela and new weekend aide Abdula are silver linings.

Fayez accompanied Burton and me to the hospital for a procedure.  Hospitals are all about hurry up and wait.  Waiting for Interventional Radiology (IR to medical cognoscenti), I discovered Fayez’s passion for music. 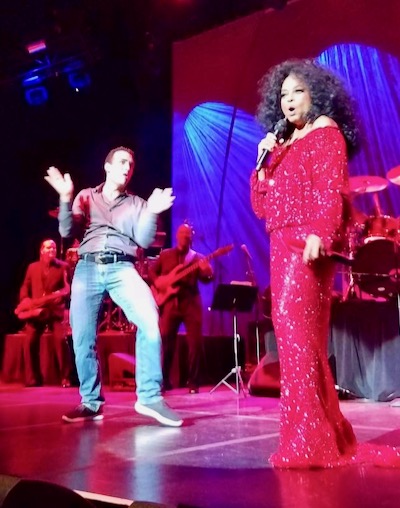 Fayez on stage with Diana Ross.

Fayez is an avid Motown fan.  Growing up in Dearborn, MI, he inherited his passion from his mom.  She  named his older sister Diana; his younger, Summer, after singer Donna Summer.  Fayez has seen Diana Ross perform live 30 times.  Diana once invited him on stage to dance with her to “Upside Down.”   Fayez has also seen Aretha, Cher, Tina Turner and Patti Labelle. Both times the latter pointed to him, signaling him to come onstage and sing.  Fayez owns up to a lousy voice.  Instead, he danced.   He says, “I’ve got rhythm and 3 moves.”

A CNA (certified nursing aide), Fayez first worked for a retired music teacher who’d suffered a stroke, had dementia and was blind.  All day Fayez’s patient waved his arms in the air conducting imaginary tunes.  After, he landed a job with singer/actor Elaine Stritch.  The late Broadway star moved to Birmingham, MI, in 2013 to be closer to family.  Born in Detroit, Stritch complained she was  “sick of the broads” who’d been her caregivers.  She demanded a male aide who was young, good looking (i.e. arm candy) and diabetic. (Stritch was diabetic and wanted someone to monitor her blood sugar.)

Fayez had all 3 qualifications.  When he told his prospective employer about his previous patient, she stood up and said, “That’s fabulous!”  Stritch’s most famous role was playing an alcoholic in the musical “Company” in 1970.  Her best known song: “The Ladies Who Lunch.”  Stritch received 4 Tony nominations, a Tony in 2002 for her one-woman show “Elaine Stritch at Liberty,” and many other awards. 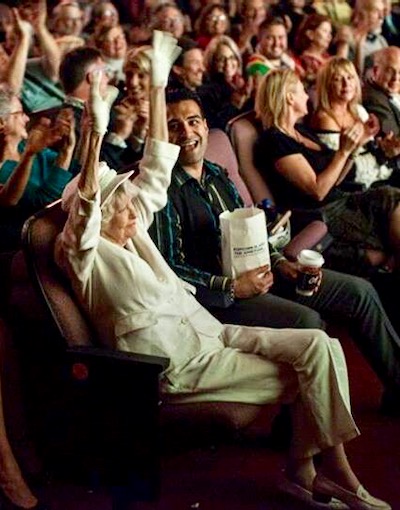 Fayez recalls Stritch telling him about her friendship with Judy Garland.  In their 80s, after Garland’s 2  week run at the Palace Theater in NY, both divas stayed up drinking all night in Garland’s hotel room.  “Early in the morning, Judy rose up in her big beautiful gown and said, ‘I can’t believe I’m saying this, but good night.’”  Garland died soon after.

For starstruck Fayez, his time with Stritch was full of excitement.  Bernadette Peters came to Birmingham to spend a weekend with her friend.  Fayez fielded calls from Alec Baldwin (Stritch played his mother on “30 Rock”), John Turturro, Nathan Lane, Elton John and more.

At the time, Fayez’ boss was the subject of a new documentary.  Fayez accompanied Stritch on a tour of cities where the film debuted.   Fayez recalls, “She wanted to be seen stepping out of a limo with a young man.”   Fayez accompanied Stritch to cities including Traverse City, MI and Milwaukee, WI., promoting the film.  “Elaine was always singing,” Fayez recalls.  “In the car on the way to Milwaukee, she made up a song, ‘Potty Chair Blues,’ and sang it the whole way.”

Fayez was Stritch’s caregiver the last year of her life.  She died in July, 2014.  The night before, Fayez had gone out for a drink with a friend.  The next day, he slept late.  “My phone was in the kitchen.  I didn’t hear it ring.  When I checked it in the morning, I found 32 missed calls.”  Fayez’s sister Diana had spent the night with the famed songstress.  Fayez rushed to Birmingham to see his patient.  “She waited ‘til I got there to say goodbye.”

A tribute celebration of Stritch’s life was held in fall of 2014.  Bernadette Peters, Nathan Lane and Stephen Sondheim all spoke, as did the actress Holland Taylor.  In her remarks, Holland thanked Fayez for enabling her last conversation with Stritch.

Elaine Stritch had been married to an heir of the Bays English Muffins family.  Between her inheritance from her late husband and the money she’d saved from her own career, she left $100,000 each to Fayez, her other staff and family members.

8 thoughts on “Fayez Hammoud is a Motown fan, a good story teller and fine caregiver”