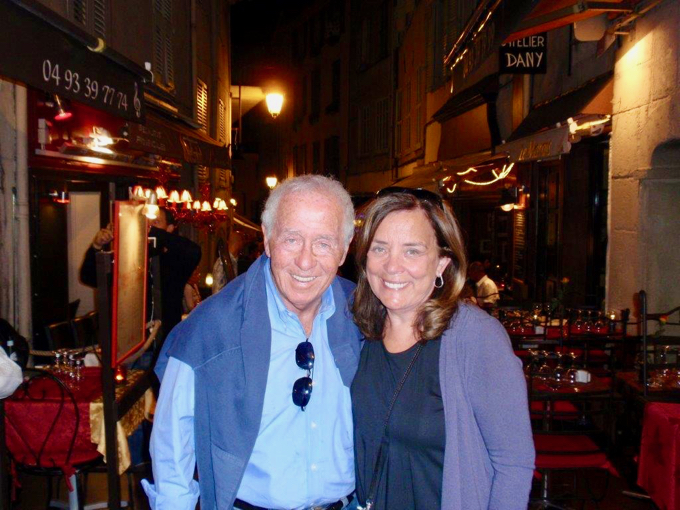 Fred and Kathy Yaffe enjoying their love of travel.

Another silver lining of my husband Burton’s (hence, my) current health crisis is a casual friend who’s become a good friend, Kathy Yaffe.  Her late husband Fred died of a stroke this past April.    Before, when Kathy heard about Burton’s post brain surgery complications, she reached out to me.

Kathy gave me a gift bag of things she found useful in dealing with Fred’s disability, including a doorbell he could ring if he needed her.  But it was her companionship and empathy that comforted me most.

Kathy and Fred met in the ’60s, when Fred did public relations for Playboy.  Kathy was a Playboy bunny.  At first they were just friends. 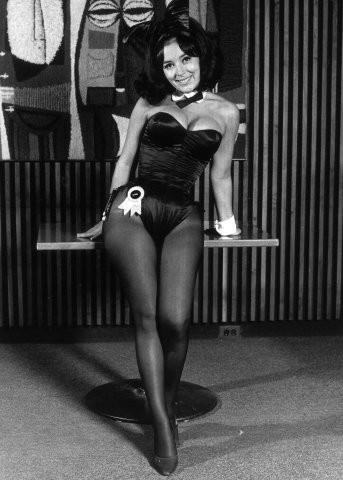 Fred was fun, crazy, a charmer.  He was no sooner named one of Detroit’s most eligible bachelors than he fell for Kathy Fitzpatrick, who had brains as well as ears and a tail.   Kathy, whose father was a longtime state rep, ran for Detroit’s Common Council.  Fred managed her campaign, which featured shocking pink billboards.  At the time, a newspaper columnist wrote about Kathy, “She looks like a swinger, acts like a school marm and thinks like a politician.”

Kathy won the primary but lost the campaign.  She was then dating a man named Howard.  But, she says, she and her campaign manager “accidentally fell in love.”   Before kissing her for the first time, Fred said, “Sorry, Howard.”

In 1970, the late mega-star radio host JP McCarthy and his wife Judy threw an Irish/Jewish dinner party for Kathy and Fred.  They served green bagels shaped like shamrocks.  Fred wore a green yarmulke; Kathy, a St. Christopher medal with a Star of David on the back.  Fred gave Kathy a cocktail ring with small diamonds surrounding an emerald.  Kathy said it looked like a Christmas tree.

Kathy asked Fred if it was an engagement ring.  He said, “Whatever.’”

The couple planned a trip to Las Vegas.  Kathy’s friend and early AIDS activist Mary Fisher took her shopping for a wedding dress—in case she needed one.  Kathy packed the dress and flew to Vegas with Fred on a junket.  Alice and Sam Gruber, then co-owners of the legendary London Chop House, were on the trip, as were others Vegas hoped would prove “high rollers.”  Caviar and Dom Perignon lubricated the dice.

Kathy and Fred’s bags arrived at the Riviera Hotel 2 days late.  They had coffee in their travel clothes, “looking like 2 drunks off the street.”  They went to the Clark County court house for a wedding license.  There they noticed a Justice of the Peace sign: Marriages $4 before 6pm; $6 after.

They had planned to be married the next day.  But while sitting waiting for the license, they looked at each other and said, “Now?”  Fred had prepared for a bigger moment.  He handed Kathy a press release about their planned nuptials, scheduled for the next day at the Rivera Hotel where Burt Bachrach was performing.  Fred planned to get down on his knees while the famous singer sang “This Guy’s in Love with You.”

Kathy wasn’t deterred.  She and Fred were married that afternoon by the Justice of the Peace.  She says, “We got the early bird special.”

At the time, the book “The Sensuous Woman” by J was the rage.  The author advised bathing in Jello as an inducement to romance.  In their hotel room, Kathy called room service to order 100 boxes of Jello.  She was turned down.  So she went to a store and bought several boxes of Jello and bags of ice which she poured into the tub.  She “stirred and stirred” with a broom handle.

“All I can tell you is it never gels.  And it stains the tub.”

Fred was as creative with Kathy’s birthdays as he was with his ad accounts.  For his wife’s 42nd birthday, since Kathy was always losing hair combs, Fred gifted her with 42 combs.  For another, a card read “And together we’ll pop the cork.”  Fred flew her to New York for lunch at 21.  Still another card read, “If you’re able, we’ll buy you a sable.”  (He’d made an appointment with a furrier.)

For one birthday, Fred gave Kathy ten $100 gift certificates to Bloomingdales.  “It wasn’t my nature to spend $1000 on clothes,” she says.  She dashed from department to department figuring out the least expensive thing to buy, so she could get cash back.

For another birthday, Fred decided the couple should have Breakfast at Tiffany’s.  He set up a table in front of the legendary store in Somerset Mall.  Their handyman dressed in a tux and served them chocolate croissants and coffee.  When the store opened, Fred bought Kathy a watch.

Another birthday gift: a surprise trip to London to see “Phantom of the Opera.”  At the time Kathy was on dialysis for a kidney problem.  Fred had arranged for her to have dialysis abroad.  For yet another birthday, Fred planned a surprise trip to Ireland.  Kathy’s birthday’s in November.  She expected to accompany Fred to a convention in Maine and packed accordingly.  Instead they few to Ireland on Aer Lingus where Fred had tracked down and arranged for Kathy to meet her relatives.

Despite his stroke, Fred was determined to continue his birthday tradition.  He talked Kathy’s brother into taking him in his wheelchair to the Lexus dealership.  He was unshaven and wearing an old jogging suit.  “He didn’t have a dime on him and looked like he should be selling pencils on a street corner,” Kathy says.  Still he managed to seal the deal.   Red balloons floated from Kathy’s new car.

My favorite Fred story didn’t have to do with birthdays, but with a bet.  The couple had a running argument about whether it was faster to drive home by the expressway (Fred) or surface streets (Kathy).  A few years back, they were leaving the Traveler’s Tower in Southfield, MI, in separate cars.  They decided to race.  As Kathy drove, she spotted friends David & Doreen Hermelin.  (Legendary philanthropists and party hosts.  Among David’s many achievements, he was ambassador to Norway.)   Kathy stopped to invite them over for a drink.

Fred beat her home.  Kathy and the Hermelins pulled up a few minutes later.  To underscore his victory, Fred awaited Kathy in the driveway…stark naked.

At 9am the morning of Fred’s funeral, I read on FB that Fred’s service was an hour later.   As a fan of Fred, and grateful for Kathy’s support, I shed my PJs, threw on clothes and sped to the Ira Kaufman funeral home.  I made it in time to hug Kathy and attend the service.

Fred, 87, had endured a rough 3 years since a stroke destroyed his ability to pull off any more surprises or pranks.  But he left Kathy, 76, with a trove of memories.  As Kathy says, “We’ve had a wonderful life.”

RIP, buddy.  Veni, vidi, vici.  You came, you played, you conquered many hearts. 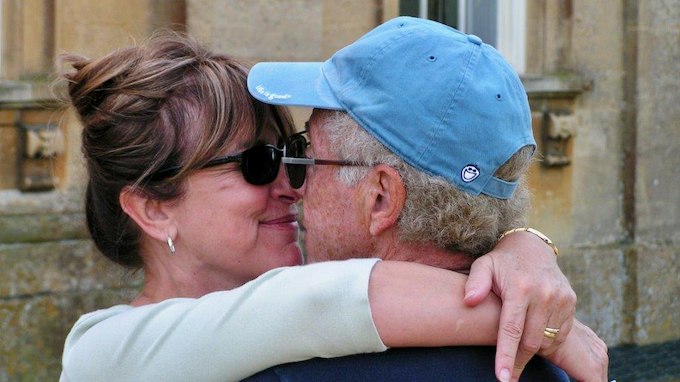 4 thoughts on “Fred and Kathy Yaffe lived life with verve, nerve and humor”