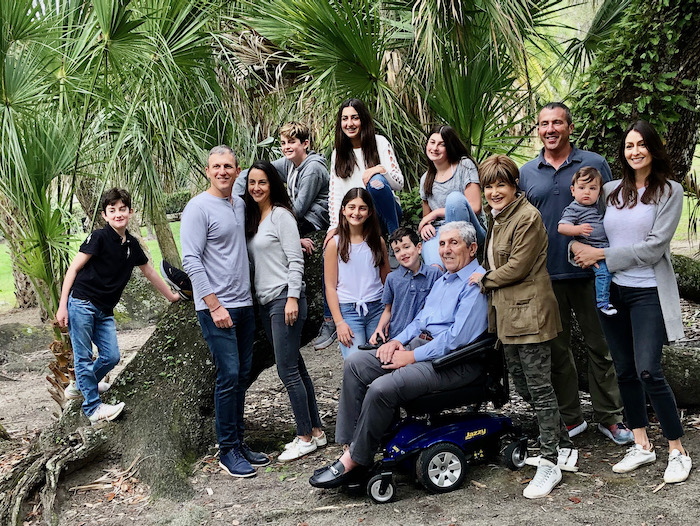 The whole family gathered around Burton.

Grandparents don’t always know the impact they have on grandchildren.  My husband, Burt is lucky to get that chance.  Our oldest grandchild, Alexis, 16, attends Lake Forest Academy in IL.  She received an  assignment for an English class.  The prompt: What is the power of a story in your life?  Her essay brought Burton and me to tears.

In summers, our whole family gets together in northern Michigan.  Burton loved piling multiple grandchildren in his truck and driving them on “mystery trips.”  Their journeys generally ended up at Meijers Thrifty Acres or Costco.  Each kid received a few dollars to spend and usually pled for more.  On the way, to deter the inevitable skirmishes among 3 girls and 3 boys (now 4), Burton told stories.  His major protagonist, Squeaky the Squirrel, was played by his index finger, bouncing up and down on the steering wheel.

Alexis’s “Just Another Day in the Truck” begins:

“My grandpa Burt is the best storyteller I know… He tells stories in such detail that I see the characters in front of me and can almost touch them.  I listen to him speak and forget everything.  I forget the fight I got in with my sister that morning…  I forget about my summer reading and my sunburn.  … My brain turns into the projector and I see myself living in the scene.

“We would spend our summers driving around in my grandpa’s beat-up black Chevy High Country Silverado truck in northern Michigan and listening.  In the truck, everyone would scream, fight and make loud noises.  The only thing that quieted the group was a riveting story from my grandpa.  Once he began, I felt safe.  My grandpa’s storyland protected me, made me comfortable, and was an escape from the noise in my life.”

Alexis’s essay also references Burton’s love for black licorice.  His truck contained an ample supply which he doled out as needed.

Squeaky the squirrel, Alexis notes, had super-powers.  She writes, “This squirrel was no ordinary squirrel.  Squeaky could fly.”  When the family wasn’t together up north, Squeaky’s main destinations were our grandkids’ homes in Chicago and Michigan.

About ten years ago, Alexis was back in Illinois.  Burton conspired with Alexis’s dad Andy to hide several pieces of licorice in a desk drawer.  He told Alexis he’d sent Squeaky on a licorice delivery mission; instructed Alexis to look for the candy.  She searched and searched.  No luck.  Had she checked everywhere? Burton asked.  Even the desk drawer?

“I found it!” she exclaimed.

The popular truck rides continued for several years, Alexis writes.  Then, during the summer of 2018, she noticed “My grandpa was tired all the time.  He would take us out on ‘adventures’ but had to end the day early to nap.  Before this summer, never in my life had I seen my grandpa take a nap.  Something was not right.”

That August, Alexis and family headed back to Chicago.  “As a new freshman, life was super hectic, so when I had a free second I called my grandpa.  I was getting older and Squeaky was coming to visit less and less.   I still adored calling my grandpa and describing my day to him.  On the phone, he seemed normal.  I did not notice any red flags.  What I did not know when I was talking to him was that a mass had been found in his head.

“After surgery, the mass was declared brain cancer.  This was the worst news that I could have received.  My grandpa was my rock and best friend.  He was the person I felt most comfortable with.  I knew things were going to change.  I knew that he had a treacherous road of recovery ahead of him.”

Burton’s illness rendered us unable to spend summer of 2019 in northern Michigan; rather Burton was in the hospital downstate, or home in a hospital bed.  Our grandkids, Alexis writes, were “bored and looking for things to do.”  They started telling each other stories.  Her cousin Hunter began talking about a day he remembered from the summer before.

“All of a sudden I was back in the black Chevy High Country Silverado cruising down the highways of northern Michigan.  Hunter was imitating my grandpa.  He said, ‘Last night Squeaky was flying around and he ran into his old friend Tutti the Tortoise.’  In his girly voice he said, ‘Squeaky, introduce us to your new friend.’  I forgot I was sitting in a grass field with sweat dripping down my cheek and it became just another day in the truck.

“I looked over and saw my grandpa driving.  He was healthy and telling us a story.  Kid Rock’s ‘All Summer Long’ was playing in the background and life was back to normal.  The windows were rolled down and the wind was blowing my hair in every direction.  We were on our normal venture to Costco to get some groceries we really did not need.

“Then the story stopped and my life flipped back to the grass field.  I realized that my grandpa was not driving me and I was not in a truck at all, rather Hunter had brought me back to that world.  He had a gift my grandpa clearly passed on to him.  The next day, my sister Camryn told a story of a different day we had spent with my grandpa.  This became an everyday ritual we all looked forward to.  …It was evident that all of us grandkids were marvelous raconteurs, just like my grandpa.

“My whole life I had used my grandpa’s stories to find tranquility.  Once my grandpa got sick and could not regularly tell me stories, I lost that feeling.  But as my cousins, sisters and I began becoming the tellers of the tales and were able to relive days with my grandpa, I found warmth there instead.  …I recognized it was the stories themselves that were providing me the comfort all along.

“For me, stories ended up being a safe place.  They comforted me as a child and they brought me out of my worries and stresses as I got older.  They also got me through my grandpa’s cancer diagnosis and through the summer of 2019. 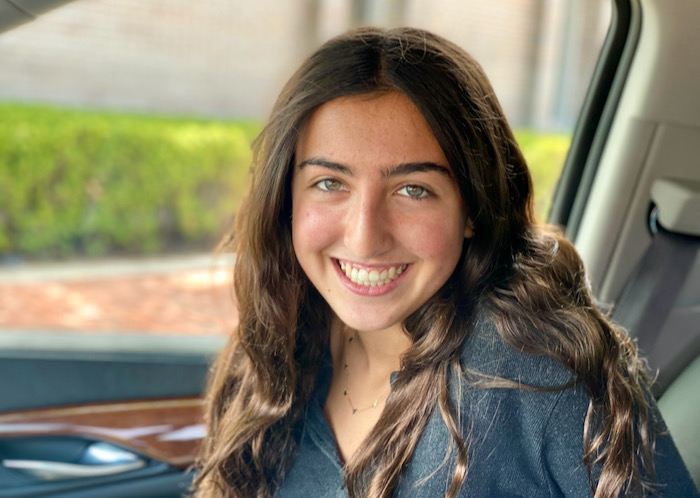