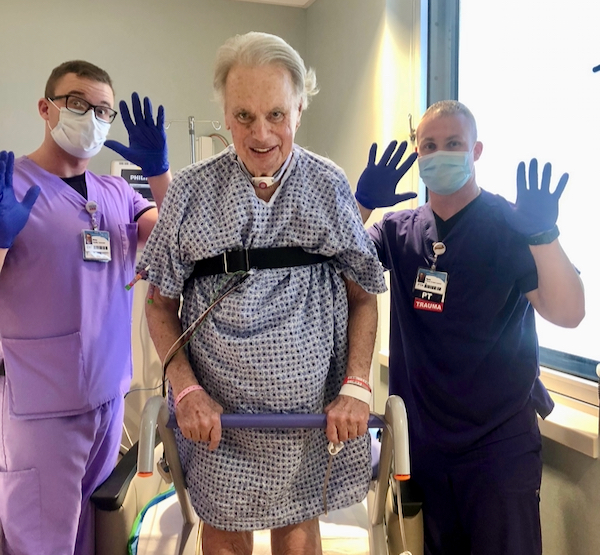 Steve Huse celebrating with caregivers as he began the huge challenge of learning to walk again.

Steve Huse is renowned in Indianapolis, IN.  He chairs Huse Culinary, Inc., which owns several restaurants including St. Elmo Steak House, founded in 1902 as a tavern but converted to a steak house during Prohibition.  Many millions of dollars and two more adjacent historic buildings later, St. Elmo’s seats 500. Volume-wise It ranks among the top 25 U.S. restaurants.  Hoosiers drive for miles to treat themselves to St. Elmo’s medium-rare prime rib.  Steve has also taken two companies public.

As envied as Steve can be, this year he underwent an experience not another soul would envy.  A grueling case of Covid 19.  In the process, Steve and wife Lila learned valuable lessons.

On March 14, 2020, Steve and Lila, snowbirds in Sarasota, FL, were driving to a friend’s party.  They’d been taking precautions to avoid Covid 19, which had begun infecting people around the globe.  They wore masks in public, washed their hands often and well, stocked up on toilet paper and sanitizer.  But seeing old friends at the party, Steve returned to his teddy bear self and dropped his cautionary behavior.  “I’m a hugger, not an elbow bumper,” he says.

Twelve days later, Steve ran a low-grade fever, was coughing and short of breath.  An oral test proved positive. Preferring to keep Steve out of the hospital, his doc prescribed the antimalarial drug Plaquenil and a Z-pak.  Lila monitored Steve’s temperature and blood oxygen level.  As Steve had increasing trouble catching his breath, he was given an oxygen concentrator.  If Steve’s pulse oximeter dropped to 88 while he was on supplemental oxygen, Lila was told to call 911, then their doctor.

On March 30, Steve seemed to be improving.  “He finally had an appetite and wanted some spicy Mexican food,” Lila says.  “I thought: Hurray!  I called the family and sent photos of Steve eating and smiling.”

EMTs arrived in hazmat suits.  As they wheeled Steve on a gurney into the ambulance, he said to Lila, “Well, this is a surprise.” The couple had made a pact not to send Steve to the hospital, “no matter what.”  Lila says, “I felt like I was betraying his trust.” She feared his comment would be the last words she’d hear him say.

“Every day we read about the death toll from this disease,” Lila says.  “People were dying alone, without their loved ones by their side, holding their hand.  That was my nightmare.”

An ICU doc they knew called to say he was sorry to see Steve on his ward.  They’d intubate him, he said, and keep him on a ventilator for a few days.  Hopefully, Steve would be home in a week.

That week turned into 102 days.  Steve came home on July 9, in a wheelchair, unable to walk.  He had a wound vac to help heal a bedsore almost deep enough to reach his tailbone.  He’d been unconscious for most of his hospital stay.  “Though Steve was the one in the hospital fighting for his life,” Lila says, “it was the hardest time of my life as well.”

Lila spoke to a group to which we both belong.  She shared some valuable lessons she’d learned during their health crisis.  Lessons worth knowing.

Lesson 1.  “Make sure you have great doctors.”  Their personal docs stayed on top of the ICU and infectious disease docs and briefed Lila every day.

Lesson 2.  “Don’t be too quick to provide a living will.”  Asked if Steve had one, Lila said she couldn’t find it, though she knew just where it was.  “No one wants to be kept alive on ventilators, feeding tubes, dialysis and full life support.”  Steve received all those treatments, but Lila didn’t want the hospital to have anything official to justify unplugging him.  “Maybe they were short on ventilators or hospital beds or just exhausted from the onslaught of Covid patients.  I didn’t want them deciding someone else had a better chance of survival.”

Lesson 3.  “You don’t have to follow a doctor’s advice.”   At one point, an infectious disease doc phoned Lila, asked her to consider taking Steve off life support.  Think about how Steve would like to live his life, he advised.  They were trying to wean Steve off paralytic drugs and heavy sedation.  He wasn’t responding or following simple commands.  He was fighting serial infections, including a fungus that can hide in the aortic valve and brain. He might never be the same mentally.  “NO,” Lila responsed.  “Steve was 78.  They couldn’t prove his mental capacity was deficient.  There’d be time to pull the plug.  He needed the chance to get well.”

Lesson 4.  “Make time for yourself.”  For the first two weeks, Lila stayed in bed, awaiting the daily update.  If she didn’t hear before 10:30, she’d start praying.  After the call, she texted or emailed family.  She binge-watched TV, excluding news channels.  “Anything to keep my brain from going to a dark place.”  She began walking “til I could walk no longer,” then back to bed.  All their children offered to come and stay with her.  Eventually she said yes to her daughter, Heather Gaalaas, and husband Kevin.  They could work from the Huses’ home while Lila watched 5-year-old Alice and Cecily.  A former ballet dancer and teacher, Lila taught the twins to read, write and do math.  She watched them learn to swim without floaties, to ride bikes without training wheels.  Lila cooked for everyone and “finally started to eat normally myself.”

The long journey toward recovery involved family and friends supporting and encouraging Steve along the way. In this photo, taken not long after he returned home in July 2020, Steve enjoys time with his son Craig and daughter Kim.

Lesson 5.  “Be good to those who are caring for your loved one.”  Steve’s son Craig and the culinary staff of their restaurants were sending food to first responders and health care workers in Indianapolis.  Once a week, Lila called the charge nurse on Steve’s hospital unit, asked how many staff were working that day, and sent lunch from a local deli.  “I hoped it showed how much I appreciated their efforts during the pandemic.”

Lesson 6.  “Educate yourself on your health insurance benefits.”  Under Medicare, Lila says, we all have 90 paid in-patient care days (hospital, skilled nursing, inpatient rehab).  Those days renew when we’ve been out of the hospital for 60 days.  Steve was in the hospital for 102 days, out for 30, and back for another 8.  Lila had the choice to pay his expenses for the additional days (over 90) or agree to use some of his non-renewable “Lifetime Days” (of which there are 60).  Medicare paid Sarasota Memorial Hospital $1.7 million for Steve’s care.  Steve used 20 of his 60 lifetime, non-renewable days.

Lila concluded her talk with some anecdotes which surely seem funnier now.  When Steve was recovering and the hospital began allowing Lila to visit, they Facetimed the family.  Steve assured daughter Kim that he and Lila had “made up and were back together again.”  At one point, Steve thought most of his family had joined a cult and were leaving to go to the Middle East.  (Lila reminded him she was Jewish and wasn’t welcome in much of the Middle East.)  When Lila entered Steve’s room one day, he was on the phone with their good friend Johnny Kittle asking him to come and rescue him from the hospital.  “And bring Annie,” he said, referring to Johnny Kittle’s wife.  “I know she’s not very strong but we might need her help.”

Steve owns a Ferrari and belongs to the Sarasota Ferrari Club and the Café Racers (car guys who lunch).  The members wanted to surprise Steve by escorting him home from the hospital in their exotic cars.  Both clubs sent emails to their group to coordinate the plans.  One club forgot to delete Steve from the email chain.  Lila came to visit a few days before his release.  Steve demanded, “You’ve got to stop the escort from happening.”

Steve: “I was looking forward to going to Culvers’ drive-through.  After all this hospital food, I want a burger and fries.”

Ending her remarks, Lila said, “The good news is he’s doing great with no lingering effects.  And we’re definitely back together again.”

Thanks, Lila, for sharing this harrowing and heroic story.   We’re all glad Steve’s back on the road again.  And glad you’re back in the passenger seat. 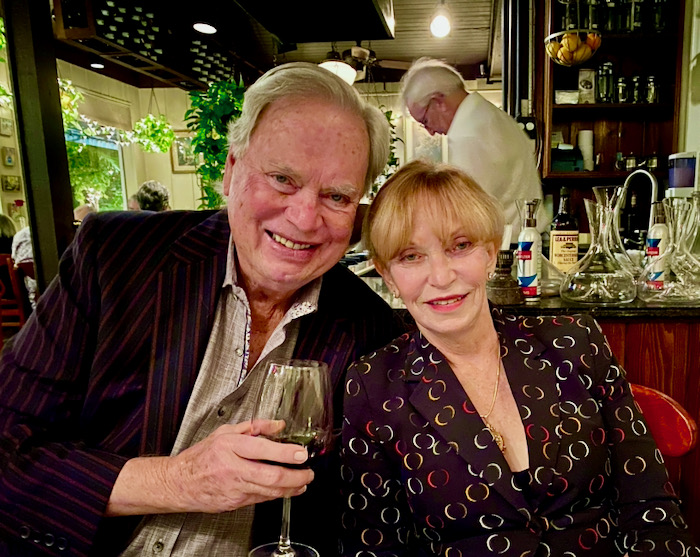 Celebrating Steve’s recovery with a toast are Steve and his wife Lila.