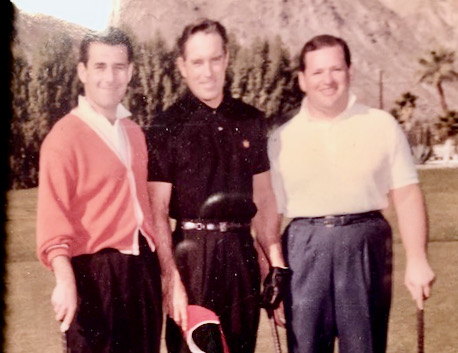 A SNAPSHOT TO REMEMBER! That’s Jerry Shulak at left and his friend and mentor Irwin Fruchtman at right. Between them is the legendary sportsman Frank Stranahan.

Success comes in different forms.  Through talent, hard work and personal charm, Jerry Shulak scored victories as an amateur golfer and encounters with some of the greatest golfers in history.  His parents, too, lived an American success story.

Jerry’s dad Harry immigrated to Detroit from Russia as a child.  Harry arrived “penniless”, Jerry says, in the early 1930s.  Starting at age 6, Harry sold newspapers until he quit school in the 9th grade to help support his family.  Harry recalled hunger pangs from the scent of horn of plenty pastries from a nearby bakery.  Resisting temptation, he brought every penny home.   Harry met wife Becky, also from Russia, in 1934.  Becky had spent several years In a Russian orphanage as her other was too ill to care for her and her siblings.   Becky remembered the terror of Russian pogroms and hiding from soldiers on horseback.

In Detroit, Harry worked as a salesman in a fur salon.  Hoping to open a salon of his own, Harry moved with Becky and 2 year old Jerry to Toledo in 1938.  He approached the Toledo Trust Bank for a loan.  Rejected.  Harry insisted on seeing the president, waited for hours.   His persistence paid off.  “You have no collateral but you seem like a smart man,” the president said.  $10,000 loan granted.  In time, Harry ran four fur salons in Toledo, gave both his brothers partnerships and put one of them through med school.  Brother Irving Shulak became a well-known Detroit psychiatrist.

Jerry inherited his father’s determination.  At 5, Jerry was fascinated by golf.  He loved watching golfers hit practice balls at Glengarry CC where his dad belonged.   Jerry approached a member  on the range, asked to borrow a club.  Bill March, the club pro, noticed him.  “You’ve got a natural swing,” he said.  March cut down an iron from his stock and gave it to Jerry.   Jerry practiced for hours and read every book he could find on golf.

At 11, Jerry walked some 15 miles from his house to Inverness CC to spectate at tournaments.  Sometimes he got a ride home.  At about 14, Jerry asked his dad to buy him a used set of golf clubs for $130.  Harry balked, saying, “Let’s see what happens next year.”

When Jerry managed to acquire clubs, Harry came upon him cleaning them, preparing for a junior tournament the next day.  “Golf is for rich people,” Harry railed.  “You’re lazy.  You need to go to work.”

Tears in his eyes, Jerry walked slowly to his car, placed his clubs in the trunk, and drove to Highland Meadows CC the day before the 4-day Toledo District Junior Golf Tournament.  He slept that night in the locker room.   Against golfers who were older and better trained, Jerry won the tournament.

Jerry says, “I never drank or did drugs.  Sports were my whole life.”  He also played varsity football and basketball in high school and captained his basketball team.

Jerry became friends with body builder, amateur and pro golfer and “icon,” Frank Stranahan, from a wealthy Toledo family that developed the spark plug.  Jerry and Frank were the only two to ever win both the Toledo District Amateur and the Toledo Junior Amateur tournaments.  Jerry deems Stranahan “the second best golf amateur ever.”  The first?  “Bobby Jones.”

At the U. of Miami, Jerry made the varsity golf team and lettered for four years.  He had to learn to hit on thicker Florida grass. He played second or third on the team.  In Florida, he met pro golfer Doug Sanders who was dating the same girl.  They became good friends.  Sanders realized Jerry was a student of the game.  At one point, having some trouble with his swing, Sanders invited Jerry to fly to Greensboro to help advise him.  For the next week’s Tournament of Champions, Sanders invited Jerry to accompany him to Las Vegas.  Jerry joined Sanders, Arnold Palmer and Jack Nicklaus—all on the same flight, in first class.

“Golf was hard for me,” Jerry admits.  “I practiced and practiced.”  He’d hit 300 to 400 balls a day.   In all he won 14 club championships.  “I loved the idea that my name would be on a club plaque, and that after I got older and passed away, members would remember me.  But the club burned down in a fire and the plaques went with it.”

At 17, Jerry happened to be paired with Jack Nicklaus in the Ohio Junior Tournament.  “Jack was 14 and already great.  Long and straight off the tee, a marvelous putter and friendly.  He couldn’t wait to finish because he had a basketball game to play that night.  His father galleried all 36 holes.”  Many years later, Jerry took a friend to a PGA tournament at Inverness.  Jack Nicklaus was playing.  Jerry was standing with his friend near a tee when Nicklaus walked up to him and said, “Jerry, how ya doin?”   Jerry’s stunned star-struck friend asked, “Did I just hear the greatest golfer in the world say hi to you?” 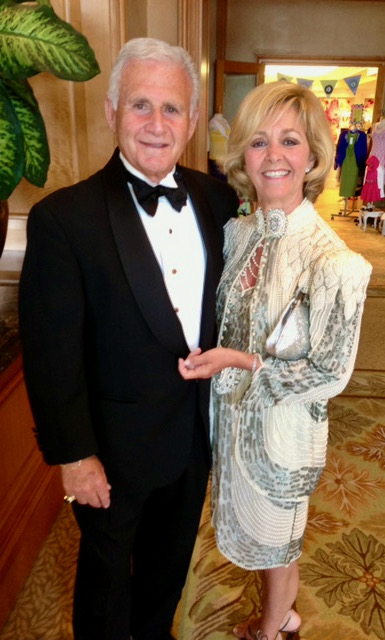 Jerry went on to sell steel for his good friend and mentor, Detroit steel magnate Irwin Fruchtman.  He also opened a clothing store and ran four restaurants.  He became a dear  friend of Burton’s and mine when he married our friend Sandi Alpert.  They have two children.  In 1977, Jerry and son Brad won the Toledo father/son city championship.

In later years, a cousin invited the Shulaks to visit in Phoenix, AZ.  “I saw water glistening in the pool as the sun came up over a mountain,” Jerry says.  “That was it.”  He and Sandy packed up and moved.  Jerry no longer plays golf.  At 84, he has spinal stenosis.  He works as a trader and financial adviser.  And like Doug Sanders, Burton and I realize he gives good advice.

Jerry says, “Golf has taught me most of what I know about life.  It’s taught me perseverance and patience.  It taught me not to dwell on the past.  I can’t change what happened yesterday; I can only go forward.”

Was it worth it?

“I had a tough father.  But I became a champion anyway and was looked up to for the first time in my life.  Golf got me in to see heads of companies I wouldn’t have met otherwise.  It let me fly on private planes.  It gave me respect and self-respect.