Vacations are supposed to be relaxing, fun or exciting, right?  For Karin and Jim Billings, this year’s annual trip to Europe proved a little too exciting.  Their European holiday turned into a European nightmare. 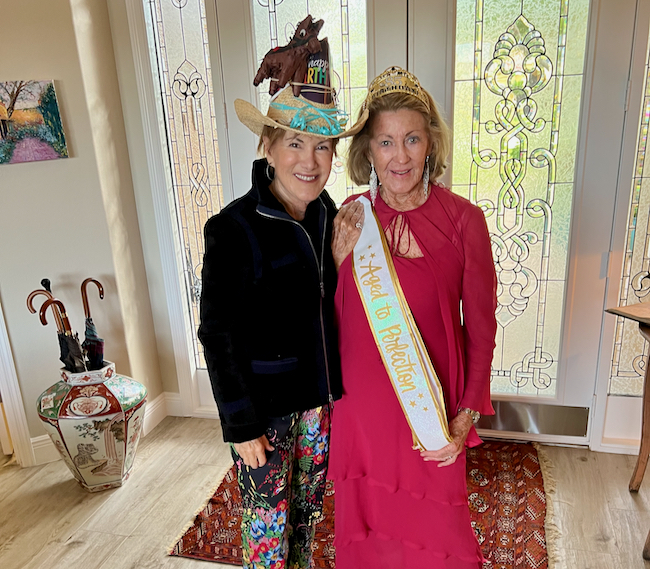 Karin invited friends to wear a hat to her 80th birthday celebration. I created a hat with a brown papier-mâché pony on top, reflecting Karin’s love of horses.

Readers of this column met Karin in March, 2020.  I featured a story on the gay Jewish cat wedding Karin, who loves cats, once hosted.

Karin, 82, is German by birth.  She and Jim travel abroad every year.  This past summer, Karin, a painter and retired equestrienne, decided to take a special painting for each of her seven great grandchildren. She also wanted to gift them much of her formal silverware and some expensive Meissen pottery. The couple agreed to hand-carry the pottery and check everything else in four suitcases.

When their plane from Sarasota to LaGuardia was delayed, Jim got them rebooked on a flight to Atlanta. He knew there were regular flights from Atlanta to LaGuardia. Arriving in Atlanta, the couple rushed to the Delta gate to learn their flight was canceled. Delta couldn’t book them on any other direct flight. What seemed a better option: an American Airlines flight to DC, connecting to LGA with a midnight arrival. That meant racing to the Delta baggage claim office and having their four checked bags off-loaded.Though the Delta manager advised against it, Jim insisted.

The couple opted for a flight through Miami where they arrived at 2:15 am. In the mostly empty airport, they met a fellow traveler. They joined him in the Turkish lounge for breakfast at 5am when the lounge opened. Meantime, they attempted to snooze in massage chairs.

Their flight from Miami made it to LaGuardia. The bags were another story. 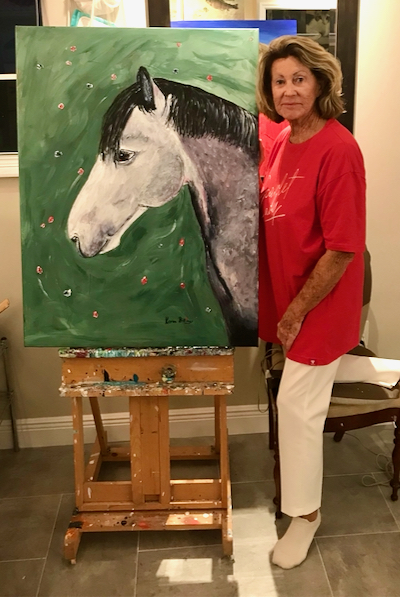 Karin Billings with with her painting of Dior, an Andalusian that belongs to her dear friend Eva in Wellington, FL. Eva just went through a rough chemotherapy treatment. Karin did the painting as a Get Well gift.

Jim and Karin boarded the Queen Mary 2 with the clothes on their backs, the Meissen porcelain and a few garments they bought in the ship’s store.

“We decided to keep smiling,” Jim said. To retain their senses of humor, Jim says, they kept telling themselves “how lucky we were not to be bothered by all the unpacking endured by our fellow passengers.”

Arriving in Hamburg, Karin’s hometown, they were greeted and hosted by family members and Karin’s old friends. One friend, Christian von Humboldt, introduced them to a journalist for “Horse” magazine. She wrote a feature on Karin’s silver medal win in the Munich Olympics 50 years ago.

Their two-week stay in Karin’s “beloved” hometown proved “delightful,” Jim says. It was time for a flight to Paris, a train to Le Havre, a two-week cruise back to NYC, a flight to Tampa and a drive home. Any frequent traveler knows the travel experience can be challenging. Self-proclaimed “seasoned traveler” Jim misread the itinerary for the flight to Paris, confusing check-in and boarding times. Missing the flight, the couple hustled to the train station to catch a fast train to Paris. No luck. It was a Friday; no room on the train. Next best option: a train to Kassel with a two hour wait for a train to Frankfurt, then Paris. They needed to race to catch the first train.

The couple each had two carry-on bags. Running, Karin tripped over a bag. She picked herself up and though in pain, Jim says, “in typical Karin fashion, she toughed it out.”

In Kassel, they had a long walk to the main station. In Frankfurt, another long walk to catch the last train to Paris. That train stopped some 40 kilometers short of Frankfurt while rocks were removed  from the tracks. In Frankfurt, another long walk. The couple arrived in Paris just after midnight. “Karin was really hurting,” Jim says. After a night in a hotel, the next morning they caught a train to Le Havre.  By now unable to walk, Karin needed a wheelchair. When they finally arrived at the ship, the ship’s doctor deemed it “too dangerous” for Karin to travel. After “much discussion,” he agreed to let Karin stay on board if a local doctor approved. They found a clinic; X-rays appeared negative. All aboard.

The first port of call was St. Milo, France. Karin stayed in bed. The next stop: Ferrol, Spain. There “out of desperation,” Jim arranged for an MRI at a local hospital. It, too, appeared negative.

Though Jim calls Karin “one of the toughest people I’ve ever known,” her pain became “unbearable.” In Lisbon, an ambulance sped the couple to a hospital. Karin’s oxygen was low; her heart showed signs of A-fib; she had a fever.  A CT scan revealed a broken rib and a crack in her D-12 vertebra.

Karin spent two weeks at Hospital Da Luz in Lisbon. A tube in her right lung drained excess fluid from pneumonia. Strong antibiotics stabilized her condition. Though the couple wanted to return home, Karin would need continuous oxygen, regular injections of antibiotics, and the ability to lie flat. Two options: air evacuation on a private jet with a doctor and paramedic for $250,000. Or a lay flat first-class seat on a commercial jet accompanied by a paramedic for $50,000. They chose the latter.

Arnold, the paramedic, told the purser Karin might need supplementary oxygen during the flight. Had he arranged for it? No. The purser ordered the threesome off the plane. Arnold promised oxygen wouldn’t be necessary after all. After much more discussion, they were allowed to stay on board. At cruising altitude, Jim noticed Karin’s oxygen was dropping. Luckily, a doctor on board was a cardiologist. He ordered the purser to provide an extra oxygen bottle.  During the nine-hour flight, Karin’s oxygen bottle was replaced three times. 40 minutes from Miami, Karin needed another bottle. The purser refused, saying the plane was descending and Karin’s oxygen concentrator was “adequate.”

“’Adequate’ wasn’t good enough,” Jim says.  He sought out the cardiologist who ordered the purser to provide another bottle.

At last, the couple landed in Miami. Jim refused to get off the plane until a wheelchair and more oxygen were available. Wheelchair: no problem. Oxygen? The purser insisted they’d find a medical office “somewhere in the terminal” to supply it. In “a rather tense moment,” Jim—whom we all know is a consummate gentleman—refused to leave the plane without oxygen. The purser was “livid,” Jim says. She called the captain. He insisted the plane had a quick turn-around. Passengers were ready to board.

“Are you willing to risk the health of my wife?” Jim demanded.

30 minutes later, oxygen arrived.  The Billings left the plane.  But Karin’s ordeal wasn’t over yet.

Back in SRQ, Karen says she “suffered” through two and one-half weeks at Sarasota Memorial Hospital undergoing various tests and receiving IV antibiotics through a PICC line.  Finally released to go home, she continued receiving antibiotics for a total of eight weeks.

The couple had both looked forward to “returning to our house, friends, community and cats,” Jim says.  They were grateful to sleep in their own beds and “sneak into the kitchen for a snack.”  Their view through the lanai had been altered.  Hurricane Ian had demolished their pool cage.  Half ended up in the pool; the rest was spread around the yard—some on the front lawn.

For Karin, coming home was “unsettling.”  Though happy to be home, she felt insecure.  Having been in a hospital for over four weeks, she’d become “comfortable” knowing she was cared for.  “She was even beginning to like the food,” Jim says.

There are two heroes to this story.  Jim sent friends a write up of what the couple endured.  His advocacy for Karin was nothing short of heroic.

I was honored to be among the first friends Karin allowed to visit.  I’d survived Stage 4 cancer, a crisis I described in my 2012 memoir, GodSigns.  Prayer played a significant part in my healing.  Karin requested I pray for her. I was glad to do what I could to bring her comfort.

Though Karin’s not sure she’ll play golf again, I’m confident she will.

Meet you on the first tee, girlfriend.  Thanks for the inspiration.  You’re a rock star of recovery.