CLICKING ON THIS PHOTO will take you to Junia Doan’s The Spark website, where you can watch some of her videos. But wait!!! First, enjoy Suzy Farbman’s column (below) about this remarkably creative woman and you’ll appreciate visiting The Spark even more.

Junia Doan’s big city/small town background has led to a perspective of gratitude, giving back and trusting her intuition.

Though Junia grew up in New York City, her grandparents lived in Oklahoma.  Three times a year, Junia and her parents traveled by train to visit the Schonwalds.  “I grew up with a contrast between cultures,” Junia says.  “We left a city that was grey, vertical and mostly cement to reach a place of blue skies, horizontal stretches and black oil wells.”  Dave Schonwald was an immigrant from Hungary who’d  moved to America to avoid being drafted in the 1880s, “Christians could buy their way out,” Junia says.  “Jews couldn’t.”

Dave arrived with $50 in his pocket and not a word of English in his head.  He went to work making oil barrels.  When he couldn’t meet his production quota, friends helped.  Dave took accounting courses at night.  At the end of the 1800s, railroads were being built in Oklahoma.  Dave took a job in the hot sun, pumping water to track workers—the “hardest job” he ever had.  In the Oklahoma Land Run of 1889, the government sectioned off land plots, describing them with a sheet on a pole.  A gun shot off and settlers raced to capture the best plot they could reach.  Dave came across a widow and three children, crying on a broken wagon, despairing of acquiring a place to settle.  Dave gave them his plot and ran for another.  Decades later, the grandchildren of those settlers visited the Schonwalds to thank them.

Junia remembers those train trips out west.  “I looked out at tiny towns and saw how far apart they were.  I developed a reverence for the land.   And for those lonely workers who pushed forward, making a life.”

Graduating from Barnard in NY at a time when most women became housewives, secretaries or schoolteachers, Junia, too, pushed forward.  In those days, she recalls, women couldn’t get a bank loan if their husband’s name wasn’t on a mortgage; good jobs went to men who wouldn’t get pregnant and quit.  But Junia never lacked for chutzpah.  She decided where she wanted to work, cold called a company and said, “I want to see what you do, where I might fit in.”  Her chutzpah led to jobs in real estate, oil and finance.

Junia attended a conference on socially conscious investing, the lone female among 40 men.  There she met Ted Doan, from Midland, MI, grandson of Herbert Dow, founder of Dow Chemical. Ted was the fifth president of Dow Chemical.  He was credited with restructuring the company to best function on a global scale, according to his 2006 obit in the Midland Daily News.

Junia recalls Ted’s coming to New York to “court” her.  “This was before the pooper scooper law,” she says.  “Ted asked, ‘How can people live here?’  I said, ‘We never look down.  We only look up.’”

They married and honeymooned in Europe, at one point visiting J. Paul Getty, who insisted houseguests pay for their phone calls.  The Doans lived in Midland where Junia and Ted spent over four years redoing Ted’s house that was designed by Alden Dow, Ted’s relative and one of Michigan’s most significant architects.  Junia worked with famed designer John Saladino on the interiors.

By Manhattan standards, Midland was a small town, then about 37,000 in population  (today about 42,000).  “Quite an adjustment for a big city girl,” Junia says.  But adjust she did.  She volunteered for the Art Council and found herself organizing an exhibit of photography from Nepal and India.  She began working on a state level, joining the Michigan Council for Art and Humanities, the modern art group of the DIA and the board of the Cranbrook Academy of Art.

After suffering three miscarriages, Junia became pregnant again. She spent more than four months in bed to ensure the delivery of daughter Alexandra.  She and Ted took Alexandra on long trips abroad to countries including Egypt, China, Israel and beyond.  They documented those trips in holiday cards with photos of their adventures.  “We wanted Alexandra to have a sense of the world—her own 7- and 8-year-old take.  Travel allows the imagination to blossom.”  When Alexandra grew up, Burton and I attended her beautiful wedding.  Alexandra and David Drucker have given Junia a granddaughter and grandson who check in every day.

Junia’s brother Dick had overseen the Schonwald family investments.  Years ago, when Dick died young of a heart attack, Junia gave up most of her volunteer commitments to fill in for him.  “My brother was increasingly ill, but in those days you didn’t talk about unpleasantness.  Secrecy was the norm.  Today it’s acceptable to talk about failure or illness. We admit things like, ‘It didn’t work out.  Or I learned from the experience.’”  When her brother died, Junia moved in temporarily with her mother to help her recover from grief.

Junia claims to being born with “an incredible amount of curiosity.”  Even today, she says, when walking to a destination in New York, she tries to always take a different route.

“I like surprises.  I’ll start giggling in the morning wondering what will happen to me today that’s fun.  Life is about discovery.  Things pull at us.  What do they mean?  I hope to live to 116 or 117 with full mental faculties.  If I’m fearful about something, I make myself push through it.” 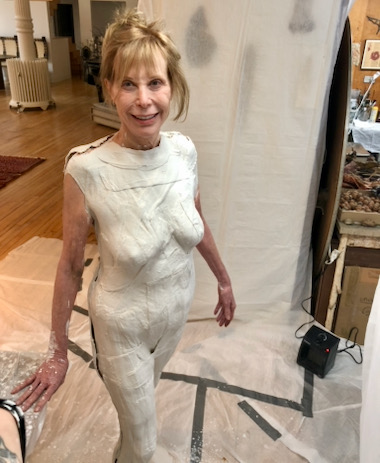 A challenge a few years ago?  Her body was cast in plaster and turned into a bronze sculpture by her friend, renowned New York artist Michele Oka Doner.

Her latest challenge?  A course in self-defense.

Junia’s a doer and a problem solver.  In New York on 9/11, she attended a luncheon of stricken women leaders.  “There are two things we can do right now to help,” she said.  “We can give money and give blood.”

Junia believes in accepting what is.  “Times force us to change.  I try to adapt without losing myself.  In the old days, we wore hats and white gloves. I still wear stockings.  Young women today go bare legged, even in winter.  Cultures shift but our values need to stay steady.  I still believe in courtesy and civility.”

Decades ago, Junia recalls, women gave morning teas or coffees to get to know each other and be home in time to make lunch for their children.  That changed when school lunches became mandatory.   “A lot of moms objected.  They no longer knew until the end of the day who was mean to Johnny.  If Johnny remembered to tell them.”

In another change Junia has observed, she used to belong to a women’s Monday club.  One member was assigned a topic and lectured about it at the next meeting.  Today women’s clubs bring in speakers, she says, and many who once participated now hold down jobs. 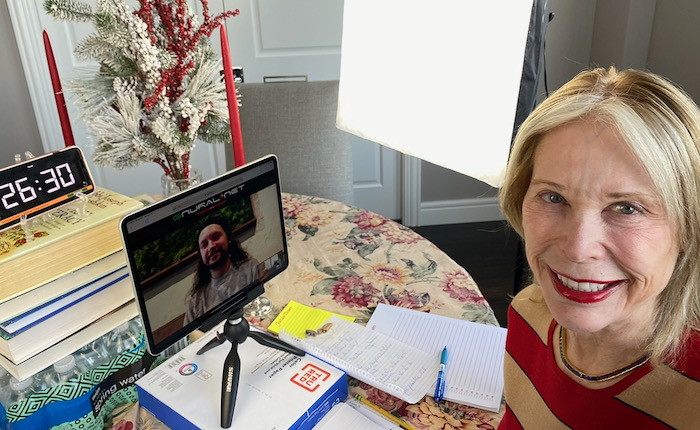 During the pandemic, Junia Doan keeps working on The Spark with portable equipment. Here she is interviewing Chef Evan Sumrell, owner of the farm-to-table restaurant Aster in Midland, Michigan.

Junia tries to help others adapt to changing times.  In 2002, she started her own public service talk show on TV in Midland.  Today “Junia Doan’s The Spark” also shows on You Tube.   (She interviewed me for a program that will air soon.)

“We’re the artists of our own lives,” she says.  “But life can dump on us.  So much is beyond our control.  We just have to go with it.  And realize we’re different people at different points in our lives.”

In the 1930s, Junia’s grandmother brought home people who jumped off trains to give them a shower and a meal.  “She was a helper,” Junia says.  Junia inherited her grandmother’s helping trait.  “I’ve had a good life.  You never know what’s going to happen.  You might as well enjoy the surprises.  And hold the light for others.”

As Junia said to Ted that day in New York when he objected to the dog poop on the streets, “We only look up.”  Thanks, my friend, for the wisdom.