Keith and Jill O’Neil on the field celebrating the Indiana Colts’ victory in Super Bowl XLI.

Keith was a tough kid and mediocre student.  He was raised in a family of athletes, including his dad, Ed, who played for the Detroit Lions and New England Patriots.  His brother and brother-in-law were football stars, too.  Keith gave football everything he had, even at practice.

While others might sometimes slack off, he says, “I went 110 percent on every snap, every practice.” 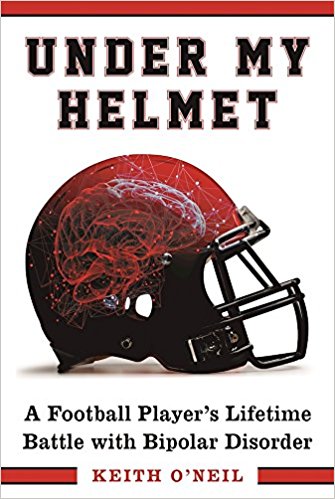 Keith’s frank and compelling memoir, Under My Helmet, focuses on his football career and subsequent bipolar diagnosis.  He shares fascinating insights about the process of going pro.

“I knew that no one hustled more than I did. I had to: I played linebacker in college at 6-foot, 225 pounds, significantly undersized for a linebacker in the NFL. I compensated with speed and instincts.” And this:  “Rookie camp is really a tryout but no one calls it that.  ‘Camp’ sounds less threatening, though if you don’t do well, you won’t get asked to attend the main camp.”

Though my son Andy once co-captained Cranbrook’s football team, I was his mostly clueless best fan. Who was actually carrying the ball? Why was one play flagged and another not? For clueless spectators like me, Keith’s book sheds light.

Overcome with anxiety after 4 years in the big leagues, Keith quit. In past years, he’d  had acute insomnia and unpredictable outbursts. “At times, I knew something was up with me mentally… I never got to the root of it.  At least in my family, we didn’t talk about mental issues.”

He writes about his close knit Catholic family and his admiration for his father, who after retiring as a player became a coach for college and high school teams.  He writes about unexpected breaks in his own career.

“You never know,” my father had told me, when he encouraged me to stick it out the beginning of junior year of college, when I was all set to transfer because I had been passed over for a starting slot.  And then the guy in front of me breaks his leg.

“You never know,” The Dallas Cowboys scout told me after he spotted me at a game, … even though he was there to scout a player on the other team. And that’s how I ended up in the league.

“Your beautiful, amazing wife gives birth to a beautiful, amazing boy—a miracle to begin with, even more so when you consider the miscarriage she went through, followed by a year of not getting pregnant—and you figure it’s got to be the best thing that ever happened to you, right?

Keith’s mood spirals down.  He attempts suicide and lands in a psychiatric hospital. He writes about  years of ineffective or harmful meds, about finally finding a psychiatrist to whom he relates and a cocktail of drugs that works for him.

“Almost everyone in the bipolar community has medication stories to share.  Each individual must go through the grueling process of finding a combination of drugs that works for him or her.”

As I was working on this column, the sports section of the Sarasota Herald-Tribune ran this headline: “Former QB Rypien struggled with depression.” The AP article, from Spokane, WA, reports the former Super Bowl MVP’s suicide attempt. Rypien suspects his destructive behaviors stem from brain damage from the sport. Like Keith O’Neil, Rypien says, “My story is impactful because people see me in a different light.  I want them to see me in an accurate light.”

I turned to my Online Bible, Wickipedia.  The first paragraph of the first citation: “Professional footballers suffer more from symptoms of depression and anxiety than the general public.”

I met Keith at a fundraiser for Compeer, an international organization which teams mentally challenged persons with mentally sound ones.  This buddy system helps the more challenged partner feel less isolated and provides rewards to his or her partner as well. My dear friend Lynn Buehler directs  Compeer’s Sarasota office. Another friend, Bunny Skirboll, founded Compeer. Keith serves on the Compeer Board.

In his keynote address, Keith mentioned his gratitude to his “beautiful wife Jill.”  After, I sought Jill out  and agreed with his assessment. Caregivers can be the unsung heroes of health crises.  Unlike a physical problem, usually openly acknowledged, a mental health crisis is often kept secret.  Considering the potential for shame and stigma, mental health problems might be even harder for the caregiver. Jill, too, went through a period of depression.

What kept Jill going, she says, was Keith’s desire to get help. Jill’s a nurse, empathetic by nature.  But she knew nothing about mental illness. “I went through a steep learning curve,” she says.  “Keith was scared to death.  I was, too.”  Plus, they were both still grieving the loss of their first pregnancy.  Jill credits “faith and family” for getting them through those first months.

Keith, Jill and their sons.

Two successful pregnancies followed, as did two healthy boys, now 5 and 2.  But Jill says being a new mom as well as coping with her husband’s diagnosis was a challenge.

“We’d come off such a high—Keith’s football career, getting jobs, settling down.  I had to learn about and manage Keith’s illness AND take care of a new baby.  I’m a perfectionist, very detail oriented.  I had high expectations for myself as a mom.  The chaos in our lives was tough.  Not knowing what our lives would look like.  For me, it’s still raw,”

At the end of Keith’s book, he mentions an upcoming 10th reunion of the Colts’ Super Bowl victory.  He’s “not sure” if he’ll attend because “I don’t want to be seen as the sick one.”

I ask: Did you or didn’t you attend the reunion?  I high-five Keith when he says they did.  Jill encouraged it.    “What they accomplished should be celebrated,” she says.  “I told him if we went and it was stupid, we wouldn’t have to go to the 20th.”  They both had a fine time.

Keith has come to accept the way he is.  He writes, “Knowledge is power.  When I think back to the undiagnosed me, I see not only a very anxious, troubled person but a very confused one.  I had no idea what was going on.  That makes the terrible feeling so much worse, like you’re in a dark room, only you can’t feel the floor or the walls and you’re not sure if there’s a ceiling or any way out.  Now, at least, I understand why I am the way I am.  That brings me peace.

“At the same time, the label of being bipolar– having bipolar—and knowing I always will be can bring me down.  It’s not all gone.  It never will be.”

Keith began his talk at the Compeer luncheon with some startling statistics.  1 in 5 Americans has a mental health disorder.  1 in 5 people who are bipolar takes his or her own life.

Keith started the 4th and Forever Foundation to bring awareness to mental health and fund research for mental illness.

Thanks, Keith, for the courage you’ve shown in sharing your story.  For the hope you bring to others.  Thanks, Jill, for your remarkable support.  May you both continue to see, and shed, the light.

6 thoughts on “Keith O’Neil helps the Indiana Colts win a Super Bowl, then tackles an even bigger challenge: his bi-polar disorder”