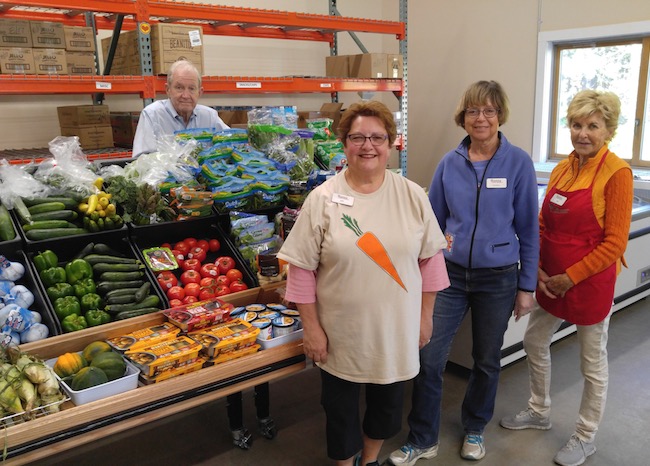 Kim’s been feeding people for most of his life.  He once fed their souls.  Now he focuses on their stomachs.  He directs northern Michigan’s Manna Food Project, which nourishes nearly 400,000 people a year. 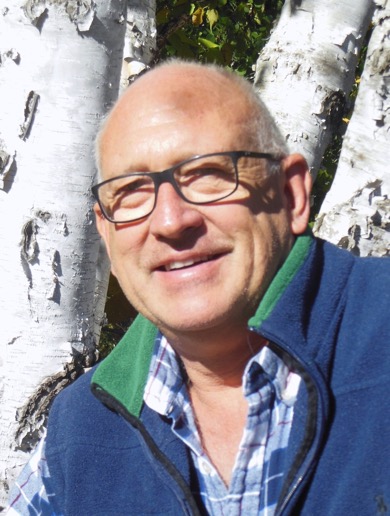 As a student at Hope College, Kim majored in archaeology and studied Greek, Latin and ancient Hebrew.  He went on 2 digs in Jordan, working on a site that was Byzantine, then early Islamic.  He discovered and became an expert on tabun clay ovens.  About the excavations, he said, “It’s miserable work but so exciting to discover new things.”

Kim earned a masters in theology, which “reinforced the way I was brought up.”   He grew up in a “solid Christian family” in Grand Rapids.  His parents gave time and money to a homeless shelter.  Kim and his brother served food to the hungry.  The family moved to NoMI, a place Kim loved and hoped to someday retire.  (Spoiler alert: he got here, but far from retired.)

Downstate, Kim worked for the Reformed Church of America in publishing and PR for 15 years, then 10 more fundraising for the Detroit Institute of Arts.  Hired away by the Red Cross, he was soon sent to northern MI to reach out to previous donors.  Arriving in Petoskey, he thought, “I’m home.”

In 2016, Kim became exec director of Manna.  It operates a food bank (distribution center), food rescue program, weekly food pantry and a backpack program.   Though this corner of northern Michigan is  filled with rambling summer homes belonging to deep-pocketed occupants, 12 percent of residents in Charlevoix, Antrim and Emmett counties live below the poverty line.  Many hold minimum wage seasonal jobs without which the area would no longer be such a desirable destination. These locals depend on help with food expenses.

Manna has an emergency fund to assist clients in desperate need.  Kim mentions a young single mother who held 2 jobs, one as a housekeeper at a resort.  She called just before Christmas.  Her rent was due.  She lacked the money to heat her house.  “We were able to carry her through to her first pay check,” Kim says.

A couple with a young child lived near Kim in Horton Bay.  They’d run out of propane during one of Michigan’s cold winters.  They had no food; their cars were busted.  They were heating their house with the stove and rickety space heaters.  Manna supplied them with propane.  Kim dropped off emergency boxes of food.

Kim says, “My heart goes out to folks who are working hard and still can’t make ends meet.”

Over 250 Manna volunteers help with collecting nearly expired or overstocked food from places like Walmart and Aldi, distributing it to soup kitchens.  They assemble about 2000 backpacks of food a week for school children to take home on weekends.

Kim’s enthused about his latest initiative, Produce for People, providing fresh fruits and vegetables.  Kim personally visited a dozen area farmers to negotiate contracts.  Through support from foundations and private donations, Manna works with farmers to purchase “a huge variety” of fresh produce at or below wholesale.  Kim points out that healthy eating helps reduce heart problems, obesity and diabetes.  The program also supports local farmers.

“It’s a win/win,” he says.  ”I can’t say enough about our local farming community.  I have visited their farms, sat at their kitchen tables, walked their fields, listened to their stories.  It means a lot to them  to help feed the hungry.  They so appreciate the opportunity.”

One of the farmers working with Manna is our neighbor Russ Bolt Jr.  Russ grows sensational fresh corn, which our family devours in August.  Russ’ parents are much loved artists in NoMI.  (You can read more about Sue Bolt in this earlier column.)  If Russ ends up with more corn than he can sell, Kim says, he donates it to Manna.

I ask about the shortage of help during harvest seasons, help that enables produce to be picked at its peak.  How can Kim count on farmers to deliver broccoli, baby melons, onions, etc., in the quantities ordered?  He’s even got that figured out.  “We’re sending our volunteers.”

As part of the healthy eating initiative, Manna offers Crock Pot cooking classes in conjunction with the Michigan State U. extension.  This year 400 people took the classes at churches and community centers.  Each participant took home a new Crock Pot, a set of knives, etc.  Kim says, “When clients tasted our Harvest Vegetable Chili recipe, over and over we heard, ‘I never thought I’d like the taste of kale.’”  Next year’s classes will feature blenders.

Kim sees his work at Manna as “an opportunity to live out my faith, to love God by loving and serving others.”

In his spare time, Kim enjoys cooking.  His father taught him to make an omelette when he was in 4th grade.  “I learned everything I know from my dad.”  Along with his father and brother, Kim has restored antiques, manufactured lighting, and built houses.  His dad taught him “if you need a tool, buy it.  You’ll always need it again.”  In his spare time, he’s restoring his own house in Horton Bay.  “When you know how to do something, it’s hard to pay someone else to do it.”

It’s a joy to meet someone whose ministry has such a broad reach.   Thanks, Kim, for all you do to keep northern Michigan healthy and vibrant and to keep much needed workers in our neck of Lake Michigan. 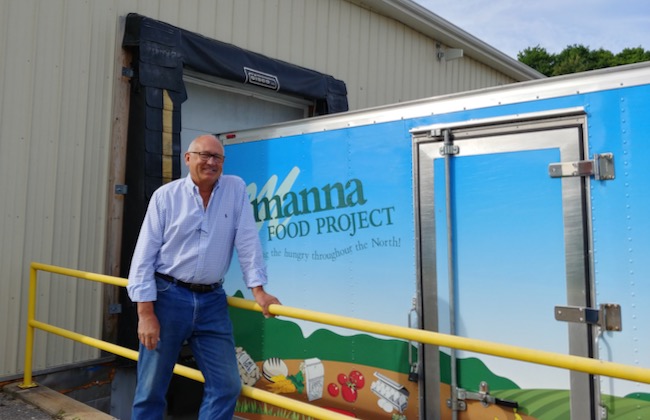