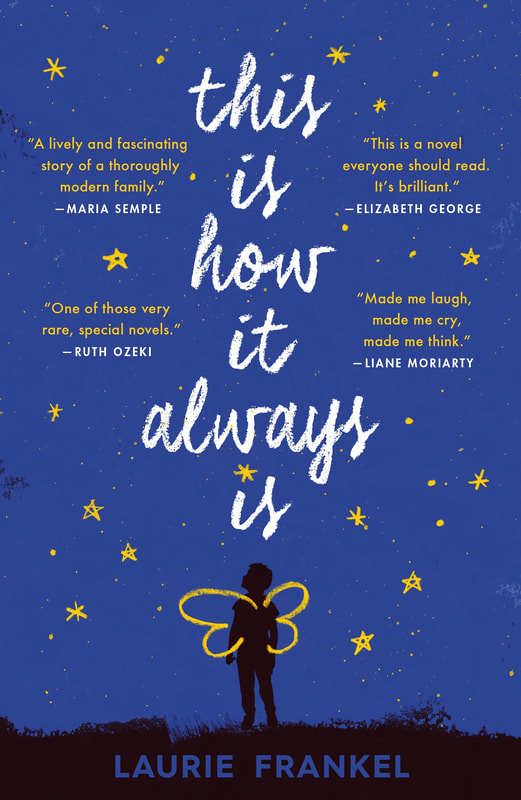 If I’d known what the book was about, I doubt I’d have read it.  The subject makes me uneasy.  But a smart friend recommended it.  The writing was so crisp, the characters so likable, that once I began—I was hooked.

Penn and Rosie Walsh have 4 sons.  Penn’s a writer who keeps working on a novel—Rosie calls it the DN, Damn Novel.  While Rosie devotes long hours as a caring doctor, Penn puts the boys to bed with imaginative bedtime stories. The system works. The Wisconsin couple adore each other and their large brood. Both parents had been only children, though Rosie gained such status through the death of a sister, Poppy. Rosie still longs for a daughter named Poppy.

That’s the set-up for a sensitive and timely novel, This Is How It Always Is.

Rosie and Penn try once more for their Poppy. Out comes Claude, who walks and talks early and, at 3, writes mysteries and bakes a cake. His family is nuts about him. Claude wants to wear a dress to pre-school. His mother talks him out of it, saying the dress is dirty and wrinkled. Claude requests a new dress and carries his lunch in a purse. His schoolmates make fun of him.

As author Laurie Frankel writes, “Penn knew in his heart that Claude should be who he was. But he also knew that Claude would be happier if neither his clothes nor his sandwich nor the bag it came out of attracted anyone’s attention…”

Rosie consults with Mr. Tongo, a social worker at the hospital where she works. He terms Claude’s  condition “gender dysphoria”. Attempting to lighten the atmosphere for Claude’s stricken parents, he picks up a magnifying glass, peers through it and says, “The Case of the Mistaken Genitalia.”

Penn and Rosie want what’s best for Claude. Worried his girly tendencies could make life hard for him, they argue over how to handle the situation.

As a parent of sons who are heterosexual and have rewarded Burton and me with 6 awesome grandchildren, I read the book mixed feelings. Relief that Burton and I (and our sons) never dealt with such an issue. Empathy for those who do.

In a passage any parent can appreciate, Penn reflects, “You have to make these huge decisions on behalf of your kid, this tiny human whose fate and future is entirely in your hands, who trusts you to know what’s good and right and then to be able to make that happen. You never have enough information. You don’t get to see the future. And if you screw up, if with your incomplete, contradictory information you make the wrong call, well, nothing less than your child’s entire future and happiness is at stake”.

And then the author delivers a note of levity…

Penn:  “I think that ship has sailed.”

The family becomes so traumatized by the community’s response to Claude’s behavior that they  move across country to Seattle. They decide to let Claude be the girl he wants to be and to keep his physical discrepancy a secret. Claude calls himself Poppy and becomes besties with the girl next door and soon with a gaggle of schoolgirls. All goes swimmingly until the secret gets out. Poppy feels so shamed she refuses to leave the house and spirals into depression.

K tells Rosie, “Buddhist way. Last life one thing, this one another, next another. Whatever happen last life to make me like this not my fault. Everyone know that. Me, my soul, will be lot of bodies before done, some male, some female, some both. So okay. No one care what is under my pants.”

Rosie protests, “At home, there is no middle way. You’re male or you’re female.”

“You keep remember: all is change.”

Poppy starts noticing Buddha statues often depicted with feminine characteristics. Poppy realizes the Buddha believed that “even things as unalterable as bodies were temporary, and what mattered was if you were good and honest, and forgiveness solved everything. That was how, whatever else they were, Claude and Poppy became Buddhists for life.”

Since reading the book, I’ve learned about a new movie, A Kid Like Jake, starring Claire Danes as the mother of a boy who prefers princesses and tutus—“gender expansive play.” And an in-law told me the boy on her son’s swim team may next year swim as a girl. This issue is one we’ll keep having to deal with, comfortable or not.

Laurie Frankel’s book is about being authentic, refusing to live according to society’s expectations and  learning to accept nonconformity. It rings so true I wasn’t surprised to read the author’s note at the end. Laurie Frankel writes, “It’s true that my child used to be a little boy and is now a little girl. But this isn’t her story. I can’t tell her story; I can only tell my own story and those of the people I make up.”

Thanks for sharing Claude/Poppy with us, Laurie.  For helping to open our eyes and our minds.