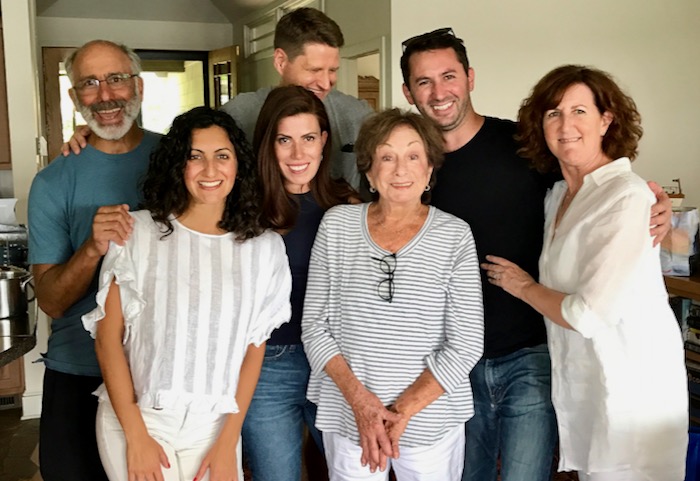 Marilyn Silver surrounded by her family.

Marilyn was a four-season friend.  From NoMI to Sarasota, we shared drinks, meals, plane rides and adventures.  Her late husband Bob was a friend, too, and Burton’s fishing buddy.

I met Marilyn some 50 years ago working on a Fashion Group fundraiser.  We created a fashion library named for Marilyn’s close friend and my colleague, late Detroit News fashion editor Tavy Stone.  Once a professional party planner, Marilyn was the perfect co-chair; the event: stellar.

In time, I watched Marilyn fight to save her son Randy, who died while still a young father.  I saw the countless nights Marilyn spent with him at Karmanos Cancer Center or on her sofa, trying to help him get comfortable, to find something he could eat.  We felt her despair over losing him, then watched her slowly find joy in life again.

Several years later, Bob became ill. Burton and I sat in his hospital room trying to figure something comforting to say while Marilyn moaned, “Why can’t they do something?”

Marilyn and Bob were married 62 years.   They’d drive to our farm south of Charlevoix—a tad hard to find.  They’d arrive still bickering about directions, Marilyn fuming, “I’m gonna divorce him.”  After Bob died, it was as though someone let the air out of Marilyn’s balloon.  She remained deflated for about a year, then rallied.  She focused on son and daughter-in-law Michael and Beth, sister Sharon, grandkids, a passel of nieces and nephews, and a horde of friends.

Her official obit reads: “A friend of almost everybody.”

Grandson Jack, giving Marilyn’s eulogy, called  his grandmother “loyal and generous.” He said, “She gave great advice.”   All true.  Marilyn and I traded book recommendations.  We attended oddball indie movies and discussed them after at the bar of PF Chang. 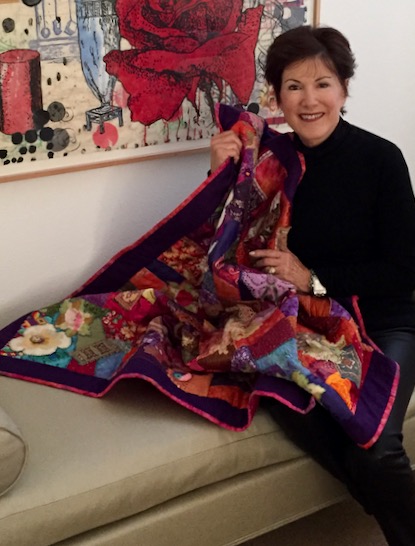 I love the quilt Marilyn made for me.

Marilyn was a talented artist.  She sewed dozens of quilts as gifts for family members and close friends.  I was honored to receive one.  For a recent birthday, Marilyn’s granddaughter Rachel had recipients take a photo with their quilts and published the photos in a book that attests to Marilyn’s creative talent.

Marilyn’s meals were also works of art.  Many began with gravlax from Bob’s fishing forays.  At the end of each dinner, Bob said, “That was the best meal I ever ate.”  An invitation to dine at Marilyn’s was a treat.  I’m blessed I was able to savor her cuisine while my stomach still cooperated.  It no longer does.  Just 12 days before Marilyn died, I sat at her dining table picking onions out of savory homemade meatloaf.  (The meal was technically prepared by Sharon.  Marilyn sat at the counter directing.)  “Suzy used to be my best customer,” Marilyn said.  “Now she’s a pain in the ass.”

(Next month, my sister and I will travel to Japan.  We’re staying at a ryokan, an inn where traditional food is served.  I alerted the trip organizer to my food issues,  saying I’d dine at the ryokan and eat what I could.  But I’ve been banished.  In an email, the organizer informed me the chef inspects plates after each course and becomes offended if food is left.   I’m just sorry Marilyn died before I could forward that email.)

Marilyn had flair.  Granddaughter Rachel once needed something to wear to a black tie event.  Marilyn owned a sequined shirt she wore with black pants.  As Rachel was then about 4 inches shorter, Marilyn suggested she wear the shirt as a dress.  “I got so many compliments,” Rachel says.  “All my friends wanted to borrow it.  Grama was so glamorous and creative.”

Marilyn’s style extended to her surroundings.  She and Bob built a home overlooking Round Lake in Charlevoix.  In the center of the great room—a red leather sofa.  Vaseline bowls, multi-colored goblets, boxes, pillows—treasures from her (sometimes our) antiquing excursions—were artfully arranged.  Days before she died, Marilyn bought exotic, well-trodden rugs from NoMI handbag maker Barbara May’s garage sale and had them turned into cushions. 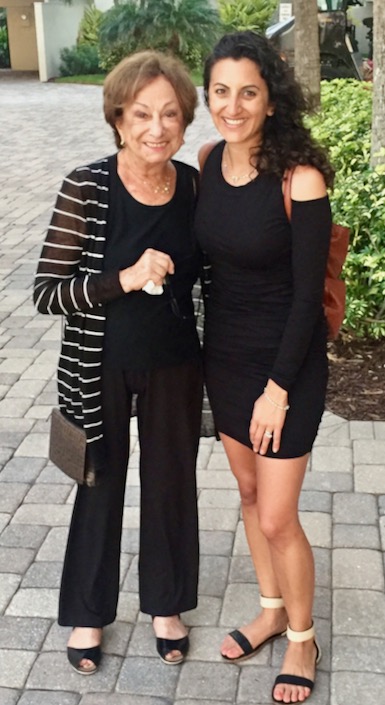 Marilyn and her granddaughter Rachel

Rachel says, “She’d see a button or piece of trim at an antiques fair and know it was ‘something.’  A few months later, it turned up on a quilt.  She taught me to haggle on Canal Street in NY.   I didn’t visit my wedding venue ’til the day I was married because my grandmother and mother planned the whole thing.  Grama envisioned the ceiling of the tent looking like a tree with a trunk supporting it.  I’ve never seen anything like it before or since.”  (That’s saying a lot because Rachel runs a website, Love Stories TV, which features wedding videos.)

Only family and close friends knew about Marilyn’s cancer diagnosis.  She never wanted to be seen or treated as a victim.  When she first shared her illness with her family about 1 and 1/2 years ago, her extended family agreed to take shifts.  They stayed with Marilyn for a week or so at a time.  As she declined, someone she knew and loved was always there to help.

Marilyn thought, looked and acted years younger than 89.  She could, and did, talk to anyone of any age or station, including an hour long conversation with our then 5 year old granddaughter, Lindsay. Marilyn designed her home in Charlevoix to sleep multiples.  Nothing pleased her more than to have several of son Michael’s brawny biker buddies slumbering in her lower level.

Years ago, Marilyn advised me to wear eye make-up.  As Jack said, his grandmother gave good advice.  So when dressing for a funeral I knew would be tough, I dutifully applied eyeliner and mascara.  At the end of the service, there wasn’t much left.

I feared I wasn’t up to the challenge of capturing such a funny, feisty, much-loved friend.  Then I thought of the first line above.  In the funeral service, which—naturally—Marilyn planned, the rabbi read from Ecclesiastes, “To everything there is a season…”  It felt as though Marilyn gave me a thumbs up.

As that wise bear Winnie said to Piglet, “If there ever comes a day when we can’t be together, keep me in your heart.  I’ll stay there forever.”

Matriarch, artist, chef, collector, host, sage and “friend to almost everybody.”  You’re forever in our hearts.