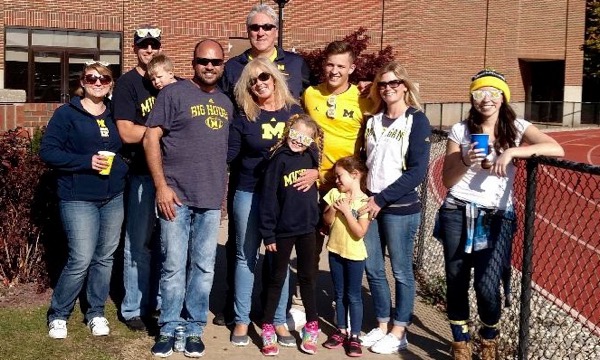 Mark Francis with family and friends getting ready for a football game. (Mark is the tall one!) 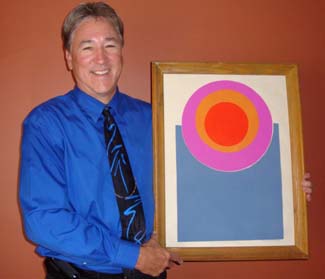 Flying from DTW to TPA*, a man sat next to me in a window seat, economy comfort.  A world traveler, he was hoping for an upgrade. No wonder—he was 6’5”.  As luck would have it (mine, not his), no first class seats were available.  I got to meet an interesting guy.   And learn a little about educating special needs children.

Mark’s story is one of hard work, being in the right place at the right time and seizing opportunities.  It reminds me of a legend in our family.  40-some years ago, my husband was in the Palm Beach airport. From a payphone, he called his uncle Max, who lived nearby, to say hi.

“I want to tell you something about luck.  This is important.  Write this down.  Do you have a pencil?”

Burton said no.  Max told him to find one and come back.  Burton left the receiver hanging, ran to the gift shop, bought a pen and paper.

“Here’s what I want you to know about luck,” Max said.  He paused for dramatic effect.  “Luck is on the side of the able navigator.”

Burton and I have quoted Uncle Max ever since.

Mark Francis would likewise prove an able navigator.  He grew up “an inner city kid” at 6 Mile and John R in Detroit.  (I know the neighborhood.  Teaches you to be tough.)  He served in the Army, got out “with not much direction,” went to community college on the G.I. bill.  He became a social worker, working with special ed students.  At the time, kids with IQs from 35 to 70 were deemed “trainable.”  (Today termed “moderate.”)

“I fell in love,” Mark says.  “The kids were so genuine, so honest.  If they loved you, they LOVED you.”

9 years later, Mark went back to college to get into administration.  He soon became principal of a special ed center in Michigan.  The center received awards for innovative programs.  One of which he’s especially proud: His center was the first to get a special ed student admitted into community college…

Timmy was in a wheelchair with cerebral palsy.  He wanted to go to the college his brother had attended.  He was denied.  Mark protested, “He has a paraprofessional with him.  Nothing forbids it in the rules of admission.”  Mark recalls, “We went round and round.  Finally, I said, ‘Either you can try admitting him or we can take it up with the Office of Civil Rights.’”  Timmy was admitted.  (After a semester, he chose not to go back.)

Mark continued in administration.  9 years later, hoping “to have a bigger impact,” Mark became county director of special ed for Lewis Cass, Michigan’s “smallest, poorest district.”  But he was living away from home.  His 2 daughters were in middle school.  “They needed their dad around.”  He moved back home and became director of student services for a district near Flint, MI.

Mark’s next post was a giant leap.  He became Director of Special Ed and oversaw funding for Wayne County, then the 17th largest education district in the country.  Federal funds of about $.5 billion ran through his offices.  He planned to retire 2 ½ years later at 55 and work on a golf course.

In 2010, preparing to retire, he attended a conference on exceptional children.  He sat in a board meeting.  “I’m probably ADHD,” he says, “so I wasn’t listening.”  He noticed a mention in the conference program of a session that seemed intriguing.  He left the meeting to attend a discussion about international work. 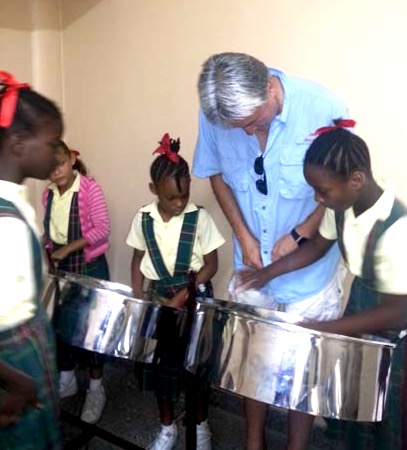 While working in Tobago, students showed Mark how to play the steel drums.

Mark joined the Division of International Special Ed and Services (DISES).  At the end of the week, he went home and told his wife, also a special ed administrator, “I’m going to Latvia.”

Mark boned up on Russian phrases and left for Latvia.  “I knew nobody and nothing.  I realized Latvia had declared independence but didn’t understand they hated the Soviet Union.  They’d passed a law that to move to a new job there you had to read and write Latvian.”  (He didn’t.)

Mark attended his first international conference.  The ministers of education and their staffs all wore headphones for translations.  “It was a turning point in my life as a professional.”

After, Mark noticed a man from Jerusalem who was DISES president.  He’d been a resource at the conference.  Mark sent over a drink, “not realizing he was a Buddhist and didn’t touch alcohol.”  The man came up to him.  Mark expressed interest in DISES.  Later that year, Mark was asked to become treasurer.  “Of course,” he said.  (Today Mark is president.)

The toughest part of Mark’s job?  While he works with bureaucrats to change policy, when governments change, policies change.  Hard won programs get dropped.  The best part? “It’s cool meeting people all over the world who will be friends for life.”

Mark’s youngest daughter is getting her PhD in physical therapy.  She’s headed to a mission in Haiti.  “She sees how much I love to travel.”

Does he recommend a career in special ed admin?  “When I worked in the schools, I always told people, ‘If you’re getting into this as a power gig, you’re in the wrong place.’  You end up apologizing for things you had no part of.  If parents had a bad experience fighting with a school, they may not trust you even though you had nothing to do with what happened.  I tell them, ‘I’m sorry for what you went through.  Help me understand how we can move forward for your child.’”

On the other hand, the rewards are significant.  “I always get more from the kids than I give.  I’m blown away by how hard they work to do things the rest of us take for granted.  Balancing a check book, going for a walk, cooking dinner.  I watch how they struggle and persevere.”  Mark, an athlete, has coached Special Olympic athletes in basketball and hockey.  “They worked as hard as I did or harder to succeed.  Many got as upset as I did when they lost.”

“As a principal, I never believed in suspension.  When there was a discipline problem, I detained students in my office and stayed with them.  One boy I sat with for 4 hours kept saying, ’You suck.’  A couple years later, I was in a local grocery store at night.  A tall young man with shouted, ‘Mr. Francis.’  I was worried he meant to jump me, but he said, ‘You don’t remember me, do you?’  He was the boy from my office.  He introduced me to his fiancée and told me he’d started his own landscaping company.  It was great seeing how he’d turned his life around.”

Mark worked with the late mother of a cognitively impaired young woman who still keeps in touch.  His student has grown up and married.  She reaches out to Mark on FB messenger on the anniversaries of both her parents’ deaths.

In the 1990s, in a move called deinstitutionalization, many psychiatric facilities around MI closed down.  They were replaced with community mental health services, shifting costs from state to federal budgets.  Mark says interest is growing in reopening long-term residential facilities.  “We can’t just keep throwing persons with mental health issues into prison where they become either victims or perpetrators.  Prisons don’t give support.  The homeless can’t get help.  Vets with PTSD are struggling and often homeless.  Mental health hospitals, if run correctly, are a better approach.”

Working with behaviorally challenged children can be difficult, Mark says.  “We are human beings with our own issues.   But we need to try to be consistent, especially with tough kids.  Listening is just as important.  These kids often lack effective strategies to deal with their problems.  I work with staff to help them read between the lines.  Children with behavioral issues often bring anger to school  but don’t have the communication skills to tell us what’s really bothering them.”

Thanks, Mark, for being an able navigator in challenging waters.  For making the world a more comfortable place for all children.