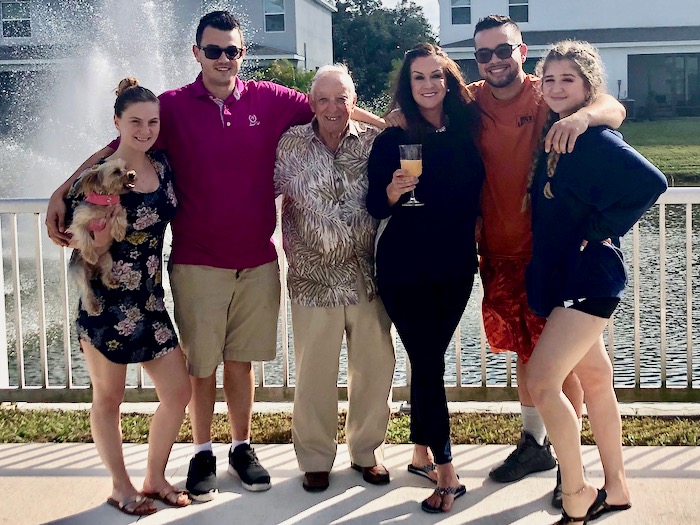 THERE WILL BE A HAPPY ENDING … That’s the theme of the life of Michelle Brault. She’s center with the glass in this family photo from Thanksgiving 2019.

When she graduated from high school in 1984, Michelle sold cosmetics until she turned 21—old enough to join Continental.  In her 20s, she traveled the world as a flight attendant.

“I never cared about school,” she says.  “Though my whole family was educated, when I was young, all I cared about what boys and fashion.”   At 30, she decided a college degree would improve her prospects.  She went to enroll at Florida’s Eckerd College.  A counselor said, “You have poor grammar skills; weak math skills.  There’s no way you can graduate from Eckerd College.”

Michelle glared back and said, “I will go to this school and I will graduate.”

Her father supported her family while she drove from Tampa to St. Petersburg for classes and tutoring.   “I took triple classes and sat eating humble pie in labs with 18-year olds.”   After 3 years she graduated, age 33, with honors and a 3.8 average.  A panel of professors approved her graduation.  Her birth mother and birth sister Kim came to the ceremony.  “It was one of the proudest days of my life.”

Meanwhile, she’d survived plenty of drama.  Within 1 and 1/2 years, Michelle had divorced a dashing Columbian con man; her mom had gotten cancer; and she’d met her birth family.  At 35, she married an attorney with a 7-year-old son.  Michelle’s sons, Nicholas and Matthew, were 7 and 5.  Together, she and #2 had a daughter, Bella.

“For me, work had been mostly a matter of hunt, kill and feed.  I just wanted to make money and take care of my family.”  She and #2 decided his income could support their family.  She quit her job as a pharmaceutical rep and became a stay-at-home mom.

Two years later, she says, “I realized I was in trouble.  I’d rushed into marriage.  My husband  had no friends.  He didn’t like having people at our house.”  The couple were together for 10 years, married for 9.   She came to see her second husband as a narcissist. The term comes from the Greek myth about Narcissus, a hunter who falls in love with his own image and for whom the daffodil-like flower is named.  The name stems from the Greek word for narcotic.

As a distraction, Michelle joined Mothers Helping Mothers, an all-volunteer not-for-profit providing emotional support, clothes and baby items free of charge to Sarasota area mothers.  It was 2008-9, during the last recession.  “Women were embarrassed to come in to a charity for clothing.  I acted like their personal shopper, advising them about fashion and what looked best on them so they felt more comfortable picking through others’ clothes.”

A young woman named Tammy came to the charity.  She’d been let go from Publix.  She had a teenage daughter with a chronic illness and was on food stamps.  Michelle said, “I think I can help you.”  She met her at the market and paid $225 for a month’s worth of food for Tammy’s family.

When she got home, she told her husband about it.  “He was livid,” she says.

“I said, ‘That’s one hour of your billable fees.’  I knew right then we’d never see the world the same way.  He was trying to make me into a Stepford Wife.”

9 years after they were married, in June, 2010, spouse #2 walked out on Michelle, their 4 children and  4,000-square-foot suburban house.  He agreed to pay her $300 a week and cover the household bills until their divorce came through.  That August, he cut off Michelle’s electric and water services and stipend.

Michelle went to see him.  She asked, “How could you do this?”

The Deuce said, “You need to get a job.”

In September, Michelle marched into the office of Sally Schule, the well-known manager of Saks.  “I said, ‘I really need a job.  You’re going to hire me.  I can sell anything.  Ice to Eskimos. How much can you pay me?”

She got the job, but not for enough to feed her family.

“I had to go on food stamps for a month until my pay kicked in and the divorce was final and I could collect alimony and child support.  I became one of the people I’d been helping.  I drove a Mercedes to Walmart with food stamps.”

She sold her wedding ring and her Rolex watch for $6000.  “That was all I could get.  When that ring  went into a box, I knew my former life was over.”

For a while, Michelle got by with help from her friends.  “Ding dong, the doorbell would ring.  A friend would bring over a meal.  Ding dong, here’s $100.  Ding dong, a gift card from Publix. “  A neighbor sent  her landscaper to mow Michelle’s lawn.

From the volunteer work Michelle had done, she knew lawyers did some pro bono work.  She convinced Carmen Gillett, a respected Sarasota marital attorney, to take her case.  Her divorce from the husband was granted on Nov. 15, 2010.  She now deems it the date of her “Emancipation Proclamation.”  She got alimony for 3 years alimony and child support until her daughter turns 18.

(more about this proud and plucky gal’s saga in Part 3, next week)