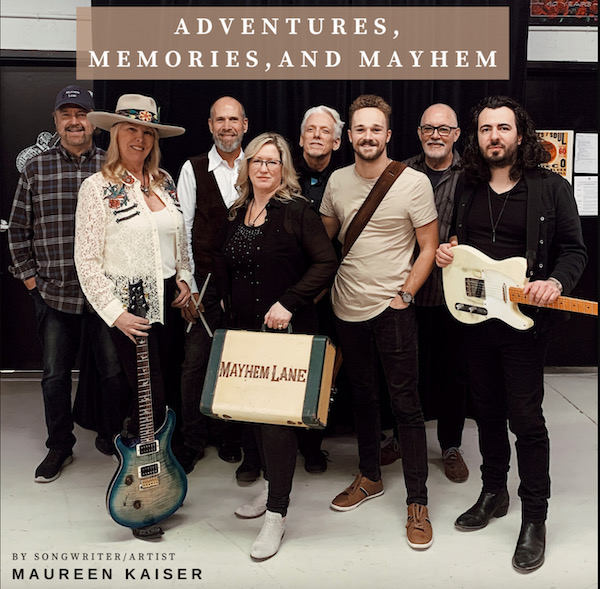 That’s Maureen in the broad-brimmed hat. This is the cover of her 2020 album. Click on this album cover and you’ll visit the Amazon page where you can listen to the songs and purchase her music, if you like it.

Some lucky people can sing.  Some join choirs.  Others enjoy karaoke.  Some merely dream of life behind a microphone.  It takes a rare, brave person to become a singer/songwriter when she’s pushing 50. That takes chutzpah!

I met Maureen Kaiser when she owned and operated an American Speedy print shop in Bloomfield Hills, MI.  25 years ago, she married Joe Kaiser, a friend Burton and I knew through a business-related organization.

Married to Joe, Maureen opened an event planning business.  At a conference, Maureen participated in a team building exercise.  She suggested writing a theme song for the conference.  What seemed like a good idea was “stalling out,” Maureen says.  A line “just popped into my head and out of my mouth,” Maureen says.  “Make a right hand turn on Mayhem Lane.”

Spending about an hour on the exercise, Maureen contributed most of the lines for the song.  Enjoying the exercise, that night at the resort she sat in the bathroom and wrote four songs—melody and lyrics.  The next day she sang her theme song for fellow conference members, who applauded her efforts.

When Maureen returned home to Scottsdale, AZ, she registered Mayhem Lane as an LLC.  Her next thought: “What to do with my newfound lust to write?”

Maureen decided to take her newfound hobby seriously.  She participated in several songwriting boot camps in Nashville.  These were “deep dives,” she says, into songwriting, recording and the logistics of the music industry.

Needing an accompaniment, Maureen bought a guitar.  She signed up for private lessons in her home, five days a week for six months.  She practiced every day and most nights, she says, “Until it clicked and my right hand was talking to my left hand.  I wasn’t great, but I was good enough to show a real musician what I wanted.”

Maureen worked with eight studio musicians on her first batch of studio recordings.  She “kept joking” they should form and band.  They rehearsed for over a year.  Three albums later, after the group had learned most of Maureen’s catalog, “We made it official and became Mayhem Lane.”  Last year, Maureen and her band performed at six gigs.  They have six more on the books for the next year.  As if that weren’t enough, this gutsy gal has started teaching songwriting workshops at corporate events.

By the time a conference is over, Maureen says, the groups she’s engaged with will have written a theme song and learned the lingo and etiquette of songwriting.  She says her workshops “are designed to engage and enlighten the participants while they enjoy a creative experience.”

During COVID, Maureen says, “I realized Keith Urban or Miranda Lambert weren’t going to call.”  She decided to do what she could to increase the chance that some professional singer would like her creations.

She put together a band of professional musicians she found from Nashville studios and in her home town of Scottsdale.  They’ve recorded dozens of Maureen’s songs that are professionally produced and released on most streaming platforms.  She hopes some of her tunes will be picked up for commercial use.

Maureen’s songs have a country vibe and usually convey a message.  One of her favorites is “Fly Like Amelia,” about Amelia Earhart.  Maureen cut it with a male vocalist, Jacob Morris from Nashville, and 14 year old Evie Clair, a female singer from Season 12 of “America’s Got Talent.”  One line from the song, “Be firm like Rosa,” references Rosa Parks, an African American Detroiter who refused to sit in back of a bus.  Maureen wrote the song with her granddaughter in mind.  “I don’t want anyone bringing her down.”

Maureen has produced 3 and ½ minute homemade videos of a few songs. Another personal fave: “Brothers Together,” a song she dedicated to fire fighters and first responders.

All Maureen’s songs are on her website, musicbymayhemlanelyrics.com, and many streaming platforms including Pandora, Spotify and Apple Music.

Maureen keeps coming up with “cowboy one-liners” and makes notes whenever they strike.

Maureen’s husband Joe is “100% on board” with her new career.  She calls him her “biggest cheerleader.”  As a thank you, Maureen wrote “I Dreamed of You” as a birthday gift for Joe and gave him the song rights.  She starts every set with the song, she says,  “It fills my heart with gratitude.”

Maureen has partnered with Detroit-based Taja Sevelle, a singer/songwriter who co-wrote with Prince and has her own private label.  Taja’s best known for her 1987 single “Love is Contagious” and for the non-profit organization, Urban Farming, she founded in 2005. Maureen says Taja’s and her “personal styles of writing blend together, and we’re creating a new vibe.”

Maureen finds people in the industry “kind and willing to help.”  Lately, she holds songwriting meetings on Zoom. One songwriting partner, Nashville-based Sherrie Austin, co-wrote “Bad for Me,” the title track to a Blake Shelton album, and songs for George Strait, Tim McGraw and Faith Hill.  Another partner, Will Rambeaux, has had songs recorded by Faith Hill, Dolly Parton and more.

Maureen was thrilled when 17-year old barrel racer and up and coming country singer Abigayle Holt included two of her songs on her EP.  Maureen was first drawn to Abigayle when she viewed film of her singing the National Anthem at a rodeo. Maureen calls Abigayle “the poster child of the person I dreamed would want to do my music.”

About her later in life career, Maureen says, “I wish I’d started sooner.  But If I had and it didn’t work out, I might have given up.”  She continues to stay up late writing songs and to take voice lessons.  She believes “everyone has a song in them.”  She’s doing her best to bring all of hers to life.

You go, girlfriend. Thanks for the inspiration.  And the gift of knowing it’s never too late to be what we might have been.

Click on this photo of Maureen and you’ll visit here website, featuring a 3-minute introductory video about her musical career.