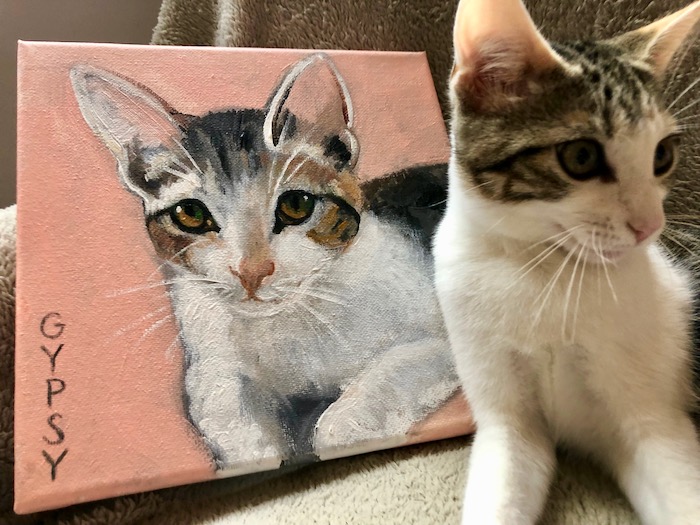 Gypsy and her portrait painted by Karin.

While many women of a certain age were agog at JLo’s Super Bowl half time performance, I’m impressed by a wunderkind who remains a wunderkind at 80. 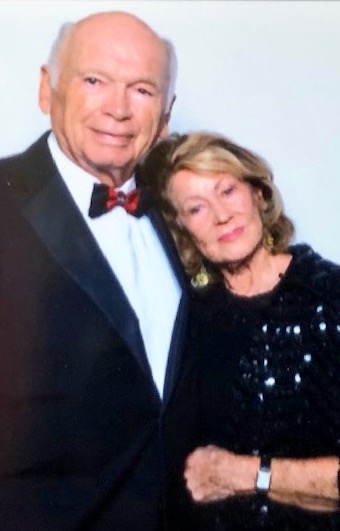 Karin Billings has been a member of 2 Olympic equestrian teams (‘72 in Munich, ‘76 in Montreal); has a silver medal; scored her favorite trophy “Liberty Bell” with Liostro, a Hanoverian that won the ’76 Derby in PA.  She’s a Cordon Bleu trained chef.  She also paints.  And, Karin and husband Jim are  this year’s mixed golf senior champions at Laurel Oak CC in Sarasota, FL.

But this column’s about Karin and her cats.

Having spent years around horses, Karin was used to cats that controlled the rat population in stables.

Gatsby was about 6 months old when he adopted Karin in 2010 by staging a sit in at her back door.  Karin then lived on Golden Gate Point near downtown Sarasota.  She “tried hard” calling animal shelters to locate his owner. 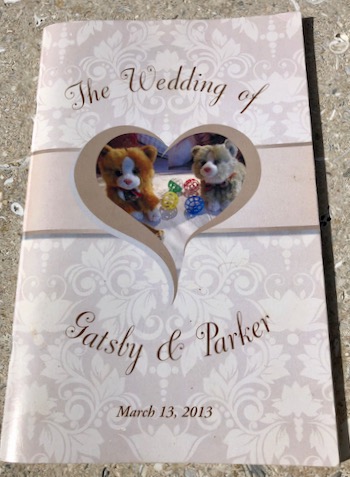 Now a neighbor in Laurel Oak (the golf course community where Burton and I live), Karin’s from Germany.   Karin took Gatsby back and forth on her flights to Dusseldorf.  He sat on her lap under a blanket, quietly undiscovered.  He loved flying, she says.

Karin’s friend Cindy Kahn had rescued a cat she named Parker. When Cindy was busy, she often left Parker with Karin.  And vice versa.  Parker and Gatsby became enamored of each other.  When Cindy arrived to pick up her cat, Parker hid from her.

Cindy and Karin agreed their cats belonged together.  They decided to formalize the feline friendship.

Karin owned a ring Cindy had admired.  Karin says, “Gatsby asked Cindy for the paw of her son with the ring Cindy loved.”

Karin published programs for the ceremony, one of which she shared with me.

Caution: Readers lacking a sense of humor about religion should skip the next few lines.  Otherwise, I share with you a brief interaction from a longer text in the printed program.  The exchange occurs between Jim (Gatsby’s father) and Dr. Lou Siegel, Cindy’s friend.  Dr. Lou had agreed to act as the “rabbi” for what Karin called “the gay Jewish cat ceremony.”

Rabbi Lou: We are gathered here to witness the marriage of Gatsby Billings and Parker Kahn.  I am privileged to be here today not only to officiate at your wedding but to celebrate your courage to marry given the social stigma today regarding the marriage of cats, not to mention gay cats, and the fact that this is a Jewish gay cat wedding.

Rabbi Lou to Jim: Has Gatsby been circumcised as required by Jewish law?

Rabbi Lou: In Jewish law the father of the groom may substitute.

Jim: Over my dead body.

Concluding the ceremony, Rabbi Lou says, “Your marriage will not be purrrrrfect, but your love and erection for each other will prevail.  I now pronounced you groom and groom.”

Considering that this ceremony took place in 2013 and gay marriage wasn’t legalized in the US until 2015, Gatsby and Parker were well ahead of the curve.

The two cats lived happily together until Parker died late last year.  After, Karin says, “Gatsby was in mourning, so sad he wouldn’t eat.” 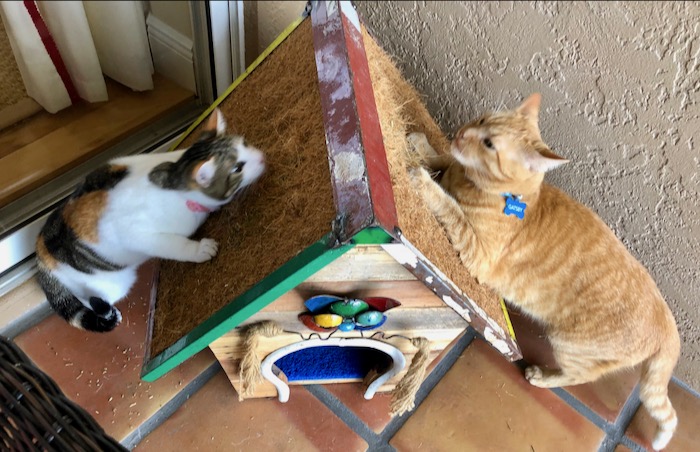 Gypsy, at left, and Gatsby.

Karin brought home a young rescue female cat, Gypsy.  “Gypsy tried so hard to be feminine.  She’d go up to Gatsby and turn around as if to say ‘I’m here for you.’ Gatsby ignored her at first but has since succumbed to Gypsy’s charms.”

This is Karin’s 3rd marriage; Jim’s 2nd—which all goes to show:  Love can be lovelier, furrier and purrier the second (and third) time around.

Thanks, Karin, for the smiles. 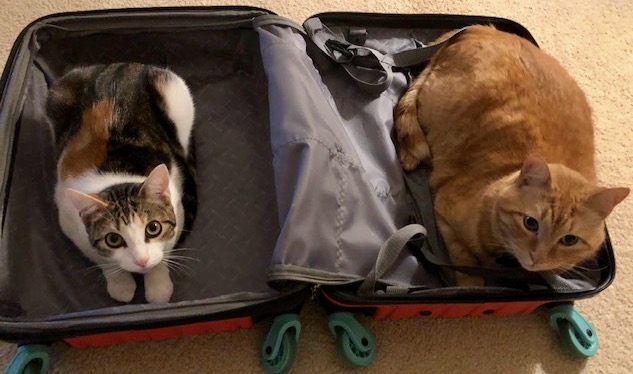