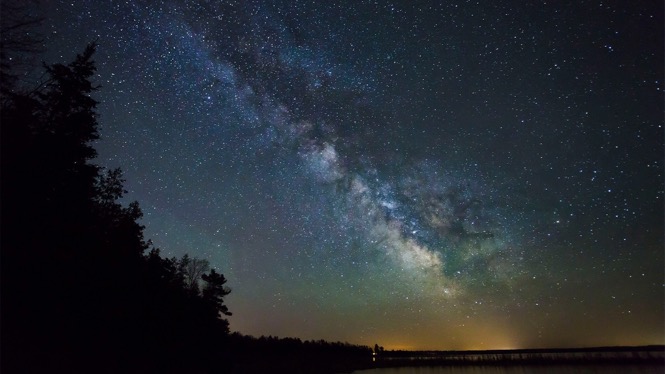 Who knew there was such a thing as an International Dark Sky Park?

Your peripatetic columnist found someone who not only knew about it, but made it happen in northern Michigan. Through Mary’s efforts, 600 forested acres of pristine Lake Michigan shoreline were so designated in 2011. The designation was the 6th in the country and only the 9th in the world. (There are now 100 International Dark Sky Parks worldwide.)

Mary combines ancient star lore with philosophy, art and  literature. She directed award-winning programs at Headlands Park, in Mackinaw City, for 9 years. A change in county administration led to a clash of objectives and Mary resigned last spring. Nonetheless, she continues to awaken others to the night sky. 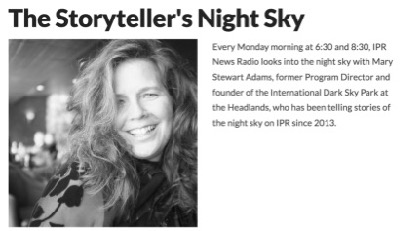 Click to visit the public radio page listing many of Mary’s broadcasts.

Consider this one, from May 28, on the Godiva Moon:

In 1678, the Godiva Procession was instituted in Coventry, England, to commemorate and honor Lady Godiva, who rode naked on horseback through the main street to protest her husband’s intent to raise taxes on the poor. Nearly 200 years later, in 1842, Alfred Tennyson found himself waiting on a train in Coventry and penned his iconic poem about it, which we can imagine is being written across the evening sky this week as the moon comes to full phase and sweeps past the outer planets, Jupiter, Saturn and Mars.

Mary graduated from the U of M, ’86, with a degree in English Lit.  In college she was arts & entertainment editor for the MI Daily. She later interned in NYC for Rolling Stone and in Detroit for NBC/TV. After running a family business In NY for 2 years, she returned to Michigan for marriage, grad school (library science) and starting a family. She and her husband divorced after 11 years, leaving her to raise 4 kids on her own. Her youngest was 6 weeks old.

Mary’s parenting approach: “enthusiasm and good educations.” All 4 kids are now pursuing interesting careers or academics. As with many single parent households, resources were scarce. Mary says, “I raised my kids with the intent to nourish their imaginations. When you have a rich imagination you never feel without.”

Mary gets her spunk from her mother. Her mom’s advice: “Do what you love.”

As a young mother reading to her children, Mary noticed the “high moral wisdom” moving through fairy tales corresponded to that of ancient mythologies. And that “the wisdom once  taught in ancient sacred centers is a foundation for the world’s religions. It’s rooted in an understanding of the human relationship to the stars. Humanity’s striving to know the stars has been expressed in the highest achievements in art, literature, science and civic organization.”  From before the Egyptian pyramids, she says, to the paintings of Boticelli, to the poetry of Keats, to the Large Telescope Array in the Atacama Desert of Chile.

“My work’s about nourishing the soul, affirming our connection to our celestial environment,” Mary says. Celestial occurrences determined the location of sacred sites for performing community rituals. Tribal elders observed where the sun rose and set each season  to decide when to bless birth or honor the dead. “Ancient cultures read the stars to tell them how to be more fully human.”

Lunch with Mary was a roller coaster ride. She swoops onto a subject I vaguely remember from college, then soars onto a different topic, from the mundane to the exalted, quoting from Shakespeare and Milton, sprinkling in whimsy, rhyme and mythology. Taking so many notes, I scarcely had time to bite into my sandwich.

Mary’s older daughter Jane, now a data scientist, sparked Mary’s appreciation for observational astronomy. At 5, Jane asked her mom what she was reading. Mary, then studying astrology, said she was reading the story of someone’s life as written in the stars. Jane said, “You’re cheating. You should be outside reading the stars.”

For 14 years, the family lived in Northville, MI. In 2001, Mary contracted near fatal meningitis.  For 6 months she couldn’t drive. She realized she couldn’t keep up the pace downstate. A year later, she  moved north to Harbor Springs where her mom was living.  In 2004, she took her kids to a Young Eagles aviation program where, Godsign #1, she met Fred Gray, a reporter. She told him about her work. “People need to know about you,” he said, and wrote a front page story for the Petoskey News Review.

Through Fred, Mary connected with North Central Michigan College. The chair of liberal arts declined her request to be an adjunct teacher. But within 24 hours the college’s marketing department called. Godsign #2: There was a last-minute cancellation in their lecture series. Could Mary be there in an hour?

Mary sped to the campus and extemporized about the rare transit of Venus across the sun in 2004. She explained its significance, including prophesies about the end of the world coinciding with the end of the Mayan calendar that would mark the end of the transit in 2012. Mary received a standing O. Godsign #3: The president of the college was in the audience.  She told the head of liberal arts, “We have to hire her.” Mary became a regular guest lecturer. 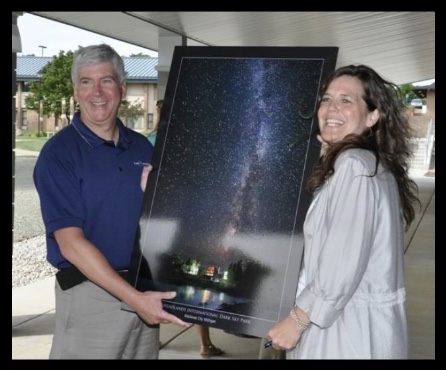 2009 was the International Year of Astronomy and the 400th anniversary of Galileo’s first use of the telescope. Mary staged a 2 night event at Petoskey’s Perry Hotel focused on environmental light pollution. She’d been working to win an official Dark Sky Park designation for the Headlands property.  In 2011, she succeeded. Astronomy buffs knew Venus would transit the sun in 2012. Previously the park had about 1500 visitors a year. After the designation, visitors came from around the world, about 1000 a day. “The designation made it a destination,” she says.

The ancients believed different regions of the zodiac relate to different parts of our bodies, Mary says. Taurus the bull (my sign) is associated with the larynx. The ancients, who saw the stars as the outer vestige of gods and goddesses, believed the gift of speaking comes from the region of Taurus. They also believed we each come from a particular star. Mary quotes Plato, in Timaeus: “… after having thus framed the Universe, he (the Creator) allotted to it souls equal in number to the stars…”

Mary thinks expressions like “follow your star” and “wish upon a star” prove man’s ongoing sense that we’re connected to starry worlds. She quotes Keats in Endymion: “I believe the natural world speaks to us.”

Mary considers constellations easier to find when seen in relation to neighboring constellations. “Knowing the stars supports harmony in community life because we find our way to each other by knowing where we are in relationship to those around us.”

Thanks for sharing such wisdom, Mary. We could use a little more harmony here on earth.  Hopefully, it’s in our stars.

(Thanks, Maris Harrington, for the stellar introduction to Mary.) 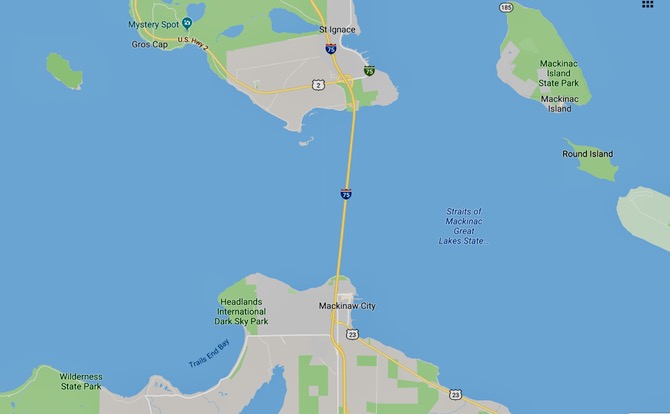 If you are visiting northern Michigan, click on this map to learn more about visiting Headlands.