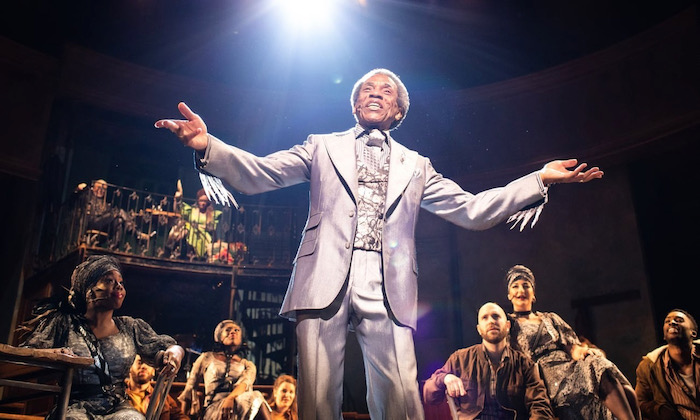 In 2004, Burton and I needed a break from my stage 4 cancer treeatment.  We flew to Florida for a doctor-approved getaway.  We happened to have season tickets to Sarasota’s Florida Studio Theater.  The regional theater was staging a production of  “Metamorphoses,” about the myth of Orpheus and Eurydice.  Two years before, the play had won 3 Tony award nominations.

To recap: Orpheus, the mortal son of Apollo, adores and marries Eurydice.  She’s bitten by a snake and dies.   Orpheus, a musician, plays his lyre to express his grief.  He plays so beautifully the gods are moved to let him travel to the underworld to bring Eurydice back.  Hades, god of the underworld, agrees to let Eurydice follow Orpheus out.  One condition: Orpheus must trust that Eurydice is behind him.  If he  turns around, Eurydice will fall back and be lost to him forever.  Orpheus walks and walks, looking straight ahead.  At the last second—he’s out of the tunnel; she’s not—Orpheus turns around.  Eurydice tumbles back, gone forever.

In great art, we often see ourselves.  In recent months, I’d survived chemo and was still undergoing radiation.  I’d been trudging through a medical process with no certain outcome.  I related to the doubts that beset Orpheus.  As the lights turned on, I was drenched in tears.

Recalling that experience, I was thrilled when Anne and I got to see “Hadestown,” a musical version of the myth, on our sisters’ trip to NY in 2019.  I was blown away by the staging, the New Orleans jazz/blues-like music, and the talent of the Broadway cast.  Andre De Shields, in his 70s, killed it in the role of Hermes.  A showstopping actor, singer and dancer, De Shields previously starred in “The Wiz” and “Ain’t Misbehavin.”

I was as moved by the story that night as I’d been more than 15 years before at “Metamorphoses.”  I remembered  my response to the earlier show—how uncertain I’d been, how moved by the message.  I felt joy in recognizing how hard it had been to trust my doctors and believe in my chances.  Joy in knowing—despite the severity of my case—I’d made it out of that tunnel.  I’d been cancer free long enough to see our oldest son David teach his oldest son Hunter to fire a baseball, to witness the bris of our youngest grandchild, Beau.  Long enough to say a blessing at our youngest granddaughter Lindsay’s bat mitzvah.

Andre De Shields won the Tony award for Best Actor in a musical in 2019.  He was 73 at the time, just four years younger than I am now, which leaves both of us miles past the spring chicken freeway ramp.  De Shields had wowed me in “Hadestown,” and I’d rooted for him.  He  accepted the Antoinette Perry (Tony) medallion with remarks he’d had a lifetime to consider.  His thoughts are worth remembering.  I share them here with you in hopes you’ll appreciate his wisdom as much as I do:

“One, surround yourself with people whose eyes light up when they see you coming.  Two, slowly is the fastest way to get where you want to be.  And three, the top of one mountain is the bottom of the next.  So keep climbing.”