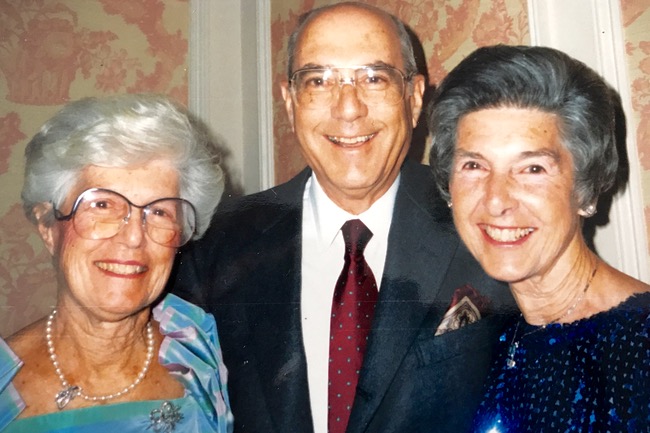 My father, Al Fuchs, and his sisters Libby (at left) and Miriam.

Death plays funny tricks on us.  Our responses aren’t always rational. But this story has a happy ending. So stick with me. That’s my father at left in this WWII era photo.

My father had come back from WWII, where he navigated bomber planes over Germany.  He went into the blueprint & reproductions business started by his mother and then taken over by his father. Dad continued to operate Multi Color Co. in Detroit for his lifetime. By the time he died in 1989, the business wasn’t the success it once was. What money Dad had went to Margaret, his 2nd wife. My sister and I were informed of this in a letter from Dad’s attorney.

The letter was addressed to my sister. My name wasn’t even included on the envelope.

I read the will. No mention of Anne or me.

My best times with Dad were as a young teen. Some days in summer, Dad drove me to his office on Delaware in Detroit, in a building once known as Miss Newman’s School for Girls. I worked as a file clerk. Realizing blueprints were on the way out, Dad also went into the printed circuit business. Copper patterns on a sheet of plastic conducted electricity. I worked dabbing a medium over stray bits of copper. To and from work, Dad and I talked current events. We liked President Eisenhower. Hawaii became our 50th state. Dad took me to the Fisher Building and introduced me to the manager of Detroit Bank & Trust. (My dad knew the manager!) High ceilings, brass cages, marble floors? Awe inspiring. I got a little book to record my savings deposit. I felt so grown up.

When the nation had a cold, Detroit had pneumonia—a phrase familiar to every Detroiter. Dad suffered a lot from business reversals. When he converted to Catholicism, my sister, mom and I stayed Jewish. And, when he became divorced from my mom and subsequently remarried a nice Catholic lady, our lives veered apart. But we stayed in touch and, as adults, saw each other several times a year. When Dad came down with colon cancer, he was brave. Religion helped him. I visited often.

But back to the will.  And the good part of the story.

Anne thinks Dad once commented that our husbands would take care of us; so, he needed to take care of Margaret. Still, I wanted an official mention. Losing a parent hurts. Our rational minds don’t necessarily kick in right away. I was upset not to be acknowledged in the will.  Not a sentence about how our father appreciated us as daughters. No accompanying personal note of explanation.

I told Burton I wished my father had given us each a token, say $1,000.  Anne and I could have used it to buy ourselves something, like a bracelet to remind us of our dad.

Several weeks later, I still felt hurt. Vacationing in Palm Beach, Burton and I were out for dinner.  I brought up the gripe again. Shortly after, Burton excused himself. He’d be back soon, he said, and left the restaurant. He was gone a few minutes.

When Burton came back, he sat down and said, “When your father was sick, I went to see him.  He asked me to do  him a favor. He told me, ‘When the time is right, I want you to give something to Suzy for me.’ ”  He reached into his pocket and handed me an envelope.  Inside were 10 crisp $100 bills. 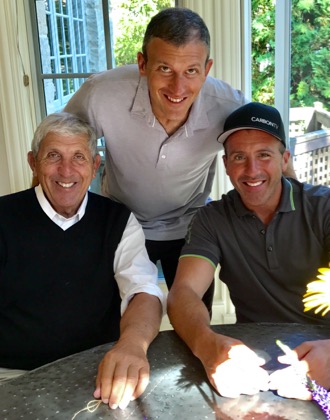 From left: Burton, my true benefactor, with our sons Andy and David (who are in the will).

I realized the truth. The gift was from Burton; the so-called favor for my father, from Burton’s imagination. I laughed and thanked the true donor and slipped the money into my purse.

“You just managed to turn a negative into a positive,” I said. “And the best thing about it: there’s more where this came from.”

Coda: I was determined to find the bracelet right away. We shopped jewelry stores the next day.  Anything I liked was too expensive. Burton advised waiting until we returned to Detroit where I knew some jewelers. Back in the D, I headed for Schubot’s in Troy. They were running a sale.  Jewelry was marked with colored dots. The color of the dot indicated the discount for each piece.  I found a sweet little bracelet with gold links and tiny sapphires and diamonds.  Owner Doug Schubot told me the price.

“Burton will just have to chip in a little,” Doug said.

And chip in Burton did, more than a little!

Sorry to say I lost the bracelet in time, but the memory of my husband’s thoughtfulness was worth way more.

My senior citizen self understands my father didn’t mean to slight me. He had a legitimate reason to leave his widow everything he had. But a word to the wise. You, too, may have a good reason to omit someone from your will. If it’s someone you care about, let them know in writing.   It’s the last impression you’ll make.

11 thoughts on “Our dad’s last will and testament forgot something: his daughters”