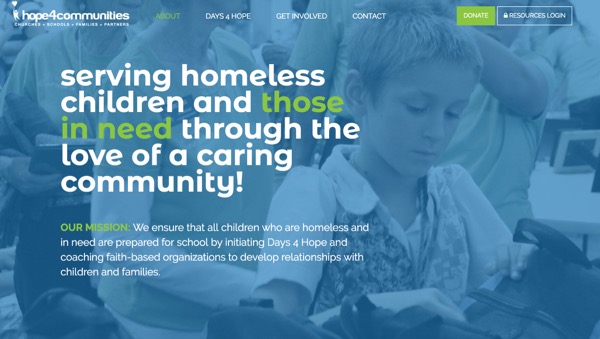 Click this image of the Hope4Communities website to learn more about this grassroots program changing lives every year. 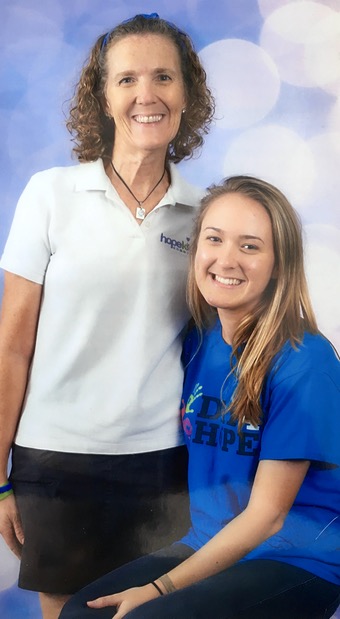 Pam Hawn and her daughter Kaylie.

It was spring of 2009.  The economy was sinking and the Hawns’ pool service business was sinking with it.  “People were worried about feeding their children and keeping roofs over their heads.  Not about cleaning their pools or fixing their pumps,” Pam says.

Pam was worried, too.  She and Mark had a blended family of 3 school age kids.  Fall was approaching.  How would they afford the medical check-ups, backpacks, clothes and supplies of sending their kids back to school?

Pam had served homeless people, through her church, since she was 13—in NY, where she lived when she was young, and now in Sarasota, where she and Mark had met and settled.   She volunteered for a food pantry and a clothes closet and on Thanksgiving.

Pam was sitting in a Bible study class watching a DVD teaching adults to think outside the box.  She gazed out the window, distracted.  “I was stuck in my private pity party when I had a sudden wake up call.  What about the homeless moms and dads I serve?  If I was feeling anxious, how must they be feeling?  I felt like God was telling me to step in.”

Pam tried to argue with God.  It was too late in the season; there was no time to organize; she didn’t know what she was doing.  “If you’ve ever had one of those conversations with God, you know you lose.”

At first, she says, the project “felt like putting together a 1000 piece jigsaw puzzle without a picture.”  She started by thinking about what she did to get her kids ready for school. 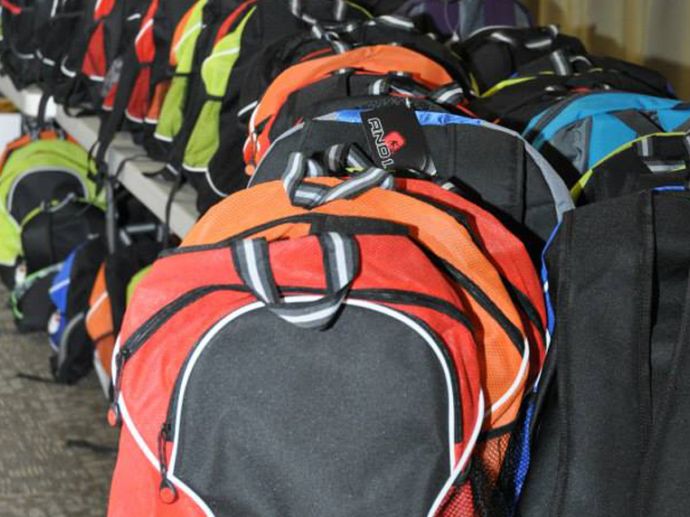 Rows of backpacks ready for children.

She asked her home church to sponsor a day she called Back to School with Hope.  She invited agencies that worked with the homeless to spread the word.  The church recruited medical professionals and volunteers and gave out gift cards from Payless.   That day in August, about 200 kids and 200 volunteers showed up.

“I was standing at the front door with my pastor, watching.  My pastor asked: Did you have any idea it would turn out like this?  I just shook my head, no.”

Pam kept at it, serving more families each year.  Last August, in its 9th annual Days 4 Hope,  Hope4Communities served 2,324 kids.  The program involved 31 churches and 13 campuses and took place over 3 weekends.  Most schools in Sarasota participated, and some in Manatee.

Hope4c consists of an army of volunteers on different levels—a working board of directors, liaisons in each specialty (medical, dental, photography, etc.) and coaches.  Last August, 3200+  volunteers pitched in.

Pam sees the Days 4 Hope as an opportunity for groups and individuals to get to know homeless families and develop ongoing relationships.  Hope4c trains  volunteers to make sure those relationships are  safe,  They teach volunteers not to share personal information such as their address or last name.  To keep their involvement generic.

The first year of Hope4c, Pam met a single mom, Susan, and her son Christoper, who was in middle school.  “When they walked into the church, Christopher shot me a dirty look.  It was obvious his mom dragged him there.”  The following Thanksgiving, Pam served dinner to Susan and Christopher and sat with them.  That Christmas, she dropped off a present.  The 2nd year, Christopher came “willingly” to the back-so-school program, but at Christmas couldn’t be found.

Pam later learned they were on the run to escape an abusive relationship.  When she heard they were back in town, she called.  She wanted to drop off a Christmas gift, a Bible.

“When Christopher saw me, he called ‘Miss Pam’ and came running up to hug me.”

The YMCA gifted Susan and Christopher a scholarship.  Christopher took part in the Kids Fit program.  He was invited to speak at a YMCA program.  Christopher graduated high school and joined the marines.  He and his mother still come and serve at Hope4c events.

Pam told me about Barbara Banks, a talented Sarasota photographer (you’ve seen her photos in my columns—here’s one example from last year), who volunteers at the Church of the Redeemer.  After kids receive free haircuts from professional stylists on Days 4 Hope, Barbara takes school pictures.  She photographed a young girl and offered to shoot one of the girl and her mother.

As the pair left, the mother handed Barbara a note.   “I’ve just been diagnosed with brain cancer and given 6 months to live.  My daughter doesn’t know yet.  This is the first photo ever taken of me with my daughter.”  Barbara kept the note as her screen saver on her iPhone.

“I get it now,” Barbara told Pam.  “It’s not about using the best lens or the finest paper and ink.  It’s about making a difference for the rest of a child’s life.”

At Laurel Oak Country Club, the ladies’ 18 hole golf group holds a fundraiser every Christmas.  Last December’s luncheon was organized by my friend Patty Chaplin, a fan of Pam and Hope4c.  (You met her last year, as well, in this column.)  I was unable to play that day, but to support Patty, I attended the luncheon.  As luck (LOL) would have it, I sat next to Pam.

Pam’s decision to work through her own personal crisis by helping others reminds me of something Oprah said at the recent Golden Globes.  When speaking about  trauma survivors, she said, “One trait they seem to share is the ability to maintain hope for a brighter morning.”

Thanks, Pam, for the brighter mornings, and futures, you’ve created for so many. 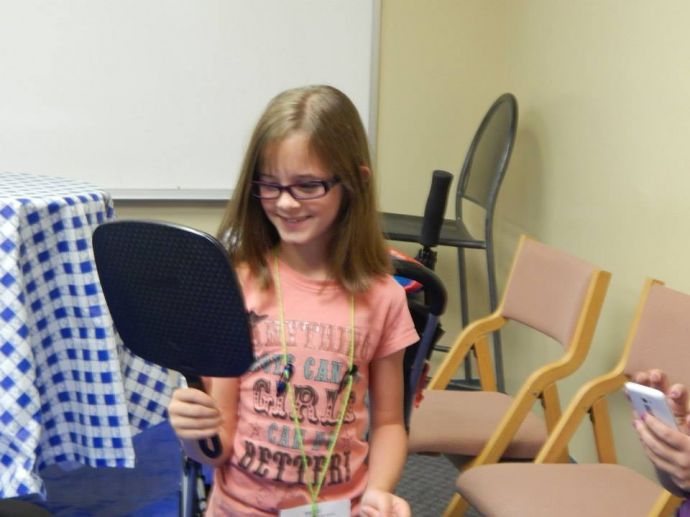 A girl admires the new look after having her new haircut.