LaShawn’s the type of educator we all wish we’d had, but few of us did.  She’s a miner of sorts.  She plumbs the depth of students’ minds seeking what moves them. 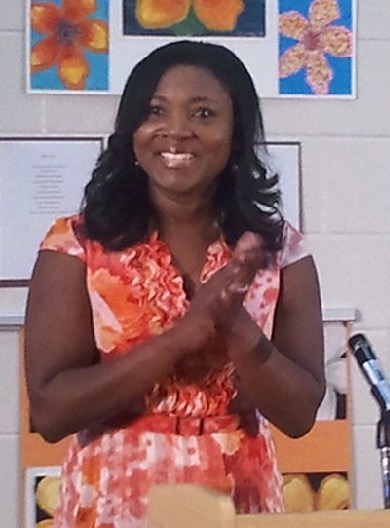 Becoming an educator was not LaShawn’s intended path.  Her parents, who owned a restaurant, expected their precocious, willful daughter to become a lawyer.  She shared their expectations.  But a funny thing happened on the way to law school.  LaShawn volunteered at a Sarasota County program for unwed teen mothers.

“I was excited to educate and empower girls,” she said.  So excited that she switched direction, earned a master’s in counseling, and began working in a teen parent program.

From her earliest memories, LaShawn’s been decisive.  At 6, she fought with her mother about how to dress and wear her hair.  “Mom wanted cute little pigtails.”  She groans.

On her birthday, which coincides with Valentine’s Day, she longed to wear her red dress.   “No,” her mother said.  LaShawn dressed as her mother wanted but took a bag of items “for show and tell.”  In fact, the bag held the forbidden red dress, which she put on the minute she arrived at school.  “I had a fabulous day,” she recalls.  The only problem: she forgot to change back before she got home.  Caught, red handed.

She recalls the incident with a smile.  “I’d come up with a plan and executed it.  At 6, I wasn’t just a rebel, I was a visionary.” 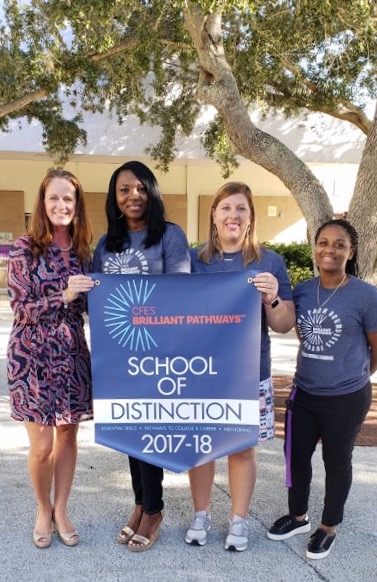 LaShawn applies the same determination to her role as a school principal.  “I urge parents to look for their kids’ inner talents and encourage them.  Everyone cares about something.  I ask students: What are you passionate about?  As educators, it’s our job to seek out those passions, whether or not they’re likely to make them rich, and to nurture them.  Empowering students leads to self-sufficiency.”

“I try to know all of them.  I put systems in place that help teachers to know them.  What I do isn’t a job.  It’s a mission, a lot like pastoring.  It takes patience and perseverance.  When most others would give up, I always feel there’s hope.”

It helps, she adds, to know the root of an issue.  A degree in counseling helps, too.

For many months LaShawn coached one teacher on how to win over her students.  The teacher “grew up in a Catholic school in an era when kids obeyed their teachers.  Her education was based on white middle class values.  What she saw as disrespect wasn’t necessarily meant that way. I walked her through the process of seeing through the lens of students who didn’t look like her or live in the same culture.”  After 2 years, the teacher thanked her for helping her understand things about herself.  LaShawn says, “I’ve seen her grow as a teacher and a person.”

There’s been a “paradigm shift” in the way education is handled at Booker.  Other schools  send representatives to observe.  In the past, LaShawn says, students sat in rows, facing the front, and were expected to be quiet unless called on.  “Today a lot of Fortune 500 companies won ’t hire individuals who can’t work in teams.  We’re teaching kids to be independent, creative thinkers.  In our classrooms you no longer see kids who are quiet and compliant.  They sit at round tables, 4 at a time.  They initiate discussions, propose subjects and engage in ‘accountable talk.’”  They work with technology and social media.

“Students need to be willing to take a risk and challenge themselves to master a skill without quitting.  I know they’re engaged when they get excited about learning.  They also need to assess what they’re learning.”  One day LaShawn approached a student having trouble with fractions.  He had a card to provide answers, saying he wouldn’t need the card once he became more fluent.  He added, “’Here’s where I am.  Here’s where I want to be.”

“When a student can identify the gaps, he knows what he has to do to close them.”

BMS’ student body is one of the most diverse in Sarasota County.  1/3 black, 1/3 Hispanic and 1/3 white.  Many from financially challenged homes.  LaShawn doesn’t coddle them.  She tells them, “Okay, we know you’re coming from a challenging situation.  What do you need to get where you want to go?  Smart is something you can get.  I’ve seen teachers take kids from not proficient to proficiency.  It’s doable.”

BMS students take at least 2 visual and/or performing arts classes a day.   Placement is based on ability, as determined by auditions.  Unlike many other schools, BMS visual & performing arts teachers have degrees in their respective areas.  Programs like the jazz band are exceptional.

LaShawn is hands on.  In the case of two feuding students, once best friends, she called them into her office together.  She said, “You need to understand the importance of communicating effectively.”  She laid out the ground rules: No interruptions.  Allow the other person to finish.  Be honest about your feelings.  Then she said, “Ladies, tell me what’s going on.”  Each girl explained her viewpoint.   It turned out they were both hurt about no longer being friends.

That situation took time, she says, and was one of many.  “Most principals wouldn’t get so involved. I feel strongly about teaching students to be productive citizens, leaders of the future.”

LaShawn detained one rebellious boy after school to complete his homework.  She stayed late with him, warning, “If you don’t complete tasks in life, you’ll be considered a quitter.“

LaShawn realizes the importance of compliance.  “If a rebellious young man is out in the community and stopped by the police, he may be asked to get out of his car.  Suppose he barks ‘Why?’  Regardless of race, kids need to learn to respect authority.  Or be faced with consequences, and not good ones.  My goal is to equip them for life.  I deal with some pretty tough kids.  I can be tough on them.  They know I have high expectations.  But in the end, they know I love ‘em.”

Thanks for sharing your philosophy, LaShawn.  And for all you do to make Sarasota a more talented and responsible community