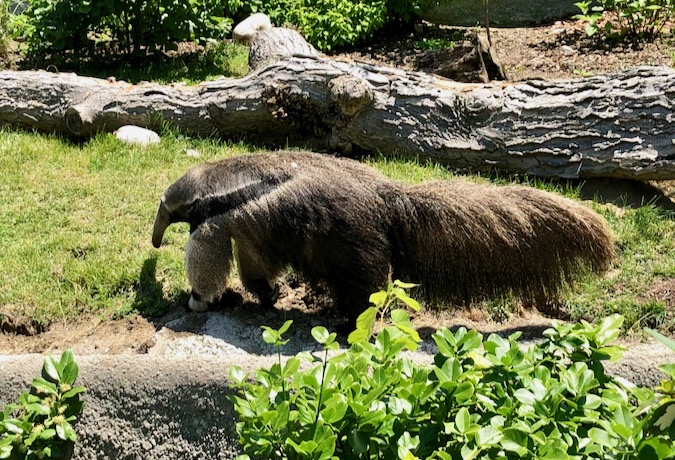 ONE OF THE MANY WILD WONDERS AT THE DETROIT ZOO. This is the Detroit Zoo’s giant anteater—also known as Myrmecophaga tridactyla or the ant bear—an insectivorous mammal native to Central and South America

Thanks to a gorilla named Ivan, Detroit has one of the top zoos, and zoo directors, in the nation. 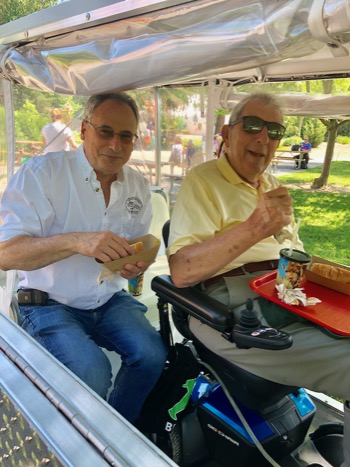 In the 1990s, Ivan was a featured attraction at a shopping mall in Tacoma, WA.  Ron Kagan was an assistant director of the Dallas Zoo and an animal rights activist.  He spoke out on NPR against demeaning a gorilla in such a circus-like way.

In Detroit, our good friend, esteemed Judge Avern Cohn, was on the search committee for a new director of the Detroit Zoo.  Hearing Ron on NPR, he recommended his being considered.  He was told Ron had been asked, but had turned Detroit down because his children were in Dallas.

“I’lll handle it,” Avern said.  Avern’s not only brilliant, but convincing.

Burton and I hosted a dinner party welcoming Ron to Detroit.  We’ve since been close friends.  Burton has served for years and still serves  as the Zoo Commissioner of Detroit and a Zoological Society board member. 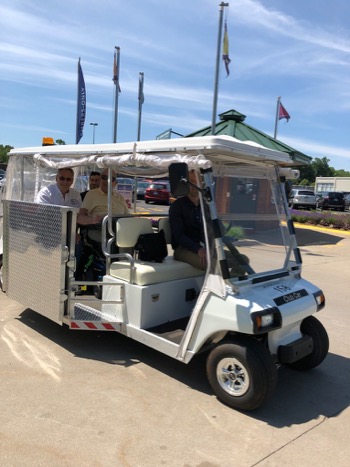 Here’s a full view of that new vehicle at the zoo.

Fast forward to a recent weekend.  The Detroit Zoo acquired a cart that accommodates a wheelchair.  Ron invited us for a visit.

The zoo features open air exhibits meant to recreate the environment in which animals live in the wild.  I watched a lion roll over and stretch,  zebras munching grass, an anteater lumber with searching snout.  Ron said the anteater has a long, sticky tongue that remains coiled until he finds his prey.  He darts out his tongue, and it’s Sayonara, stuck ants.

In the Wildlife Interpretive Gallery, we saw a sculpture of a lioness with 3 legs, part of a program called Snares to Wares.  The program encourages East Africans who trapped wild animals for food to instead create artworks out of metal from the snares.   The zoo shop has some of these sculptures for sale.

We visited the carousel on which dozens of happy children rode up and down to calliope music.  I sought out the camel Anne and I dedicated to our late mom a while back.  Ron said he’d long wanted a carousel but didn’t have the funds.  He preferred  artistic wood carved animals rather than fiberglass ones and found an Ohio company to create a carousel for $600K.

After talking about his dream for months, Ron received a call.  A stranger asked what the carousel would cost.  “About $1 million,” Ron said.  “It should be $600,000,” the stranger said.  Ron explained he’d included the cost to plan and prepare the site.

Burton waited in the shade in the wheelchair cart while Ron showed me the Polk Penguinarium, the largest in the world.  I watched children delight in being nose to nose with a penguin on the other side of a glass wall.  Ron escorted me down a ramp depicting Shackleton’s famous doomed voyage to  Antarctica, where penguins live.  British explorer E.H. Shackleton attempted to cross Antarctica in 1914.  His wooden ship Endurance became stuck in ice.  Ron said that when Shackleton  realized they’d been stopped, he told his men to find a big enough piece of ice and grab a football.  Stranded for almost 18 months in Antarctica, the 28 man crew returned safely after a stormy voyage of 720 nautical miles.

(US District Court Judge Avern and Lois Cohn brought us dinner soon after our zoo visit.  Turns out Avern’s read many books about Shackleton.  And he remembers what he reads.  Btw, Avern’s in his 90s.  Avern quoted the captain of Shackleton’s boat who warned, “What the ice takes, the ice keeps.”  Hence: Shackleton’s heroic rescue efforts.  The Endurance was eventually crushed by ice.)

But back to the zoo.  Burton was tiring.  Heading for the parking lot, my stoic husband didn’t complain about the discomfort of being wheelchair bound.  He didn’t lament his inability to get close enough to see the lion or stride in and out of the Penguinarium.

Over the years, Burton ran or was active on umpteen boards including Beaumont Hospital, the YMCA Southeast Region, the Economic Club, the Legal News and U of D Mercy College, all while raising 2 sons and building a company.  (Not to mention his tireless work for Special Olympics in Sarasota.)   Brain surgery has sidelined my husband now.  It hasn’t dimmed his appreciation for organizations like the zoo with which he was involved.

As we crossed the train tracks and approached the gate, here’s what my amazing husband said to me, “It’s been an honor to serve this community.” 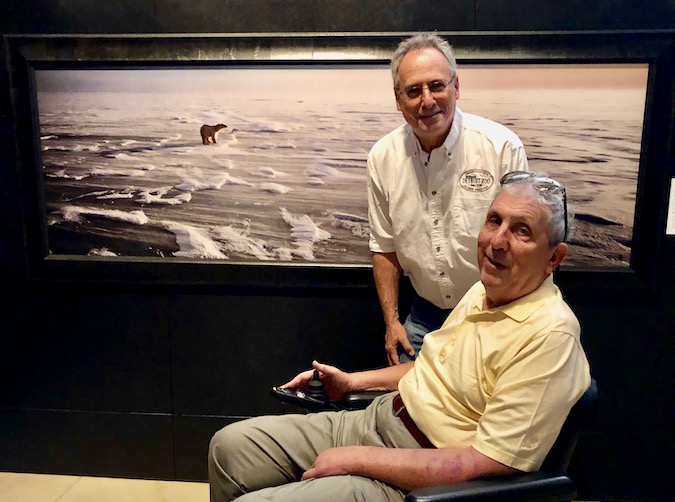 6 thoughts on “After years of work, Ron Kagan and Burton revel in the wonders of a day at the zoo—even if you’re in a wheelchair.”