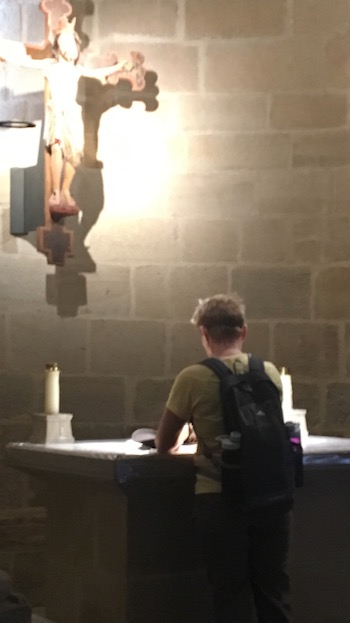 As a pilgrim, Jo paused to consider her spiritual intentions for the long trek at the church in Torres del Rio, which is between Pamplona and Logroño near the traditional eastern starting point of the Spanish portion of the Way of St. James.

Jo Kleindienst came up with a great way to move forward—literally.

Jo and husband Jesse Duenas live in Sarasota.  Jo’s from Stow, OH.  She worked in the federal government for the Navy and FAA, then consulted for the FAA. At 61, she seemed the essence of health. She worked part time, played USTA tennis, was a runner, “gym rat” and vegan.

In 2013, after an annual mammogram, Jo received the dreaded call back. She returned for another mammogram, then sonogram, then biopsy. Though she proved Stage 1, her type of cancer, invasive lobular carcinoma, tested likely to return.  Jo hung out the NOT WELCOME sign with two surgeries, chemo and radiation.

During treatment, Jo continued to work, exercise and play tennis.  “Cancer took enough things away from me,” she says.  “I wouldn’t let it steal the things I loved.” Since treatment concluded, in May, 2014,  her mammograms have been clear—knock wood.  (A common mannerism among cancer survivors.  I think I’ve worn a dent in my head.) 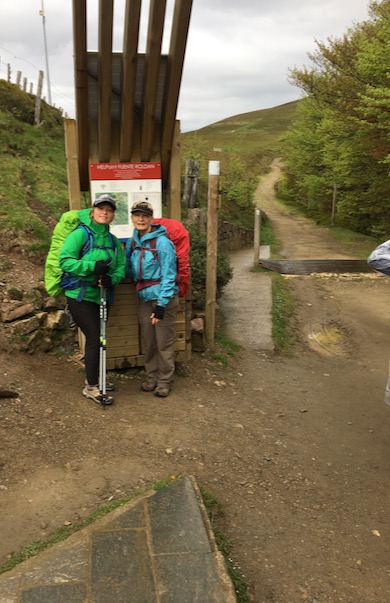 Jo (right) with her daughter Lizzie in full gear along the journey.

Several years before, Jo had seen the film The Way, starring Martin Sheen.  Sheen plays a father whose estranged son dies while walking the Camino de Santiago (The Way of St. James) in Galicia in northwestern Spain.  Sheen’s character determines to finish the route for his son and scatter his ashes as he goes. (Yes, I recommend the movie.)

For more than 1,000 years, walking the Camino has been an important  spiritual journey, especially for Catholics.  Today over 200,000 pilgrims and other travelers walk the Camino each year.  The entire walk stretches nearly 500 miles. The minimum journey to earn a Compostela (certificate) is 62 miles. The Camino ends at the cathedral of Santiago de Compostela where St. James’ remains are believed buried.

Along the way, different villages have albergues or inns where pilgrims spend the night and usually  dine. Each albergue has its own insignia which is stamped on a certificate along the lines of a passport stamp.

Since seeing the film, Jo, an enthusiastic backpacker, wanted to walk the Camino. But the journey can take several days or weeks, depending on the distance. She’d never found the time.

Though Jo was baptized Catholic, she hadn’t practiced her religion for many years. In May, 2013, that changed. “I was staring at my mortality,” she says. “My diagnosis got me back on a spiritual path.” 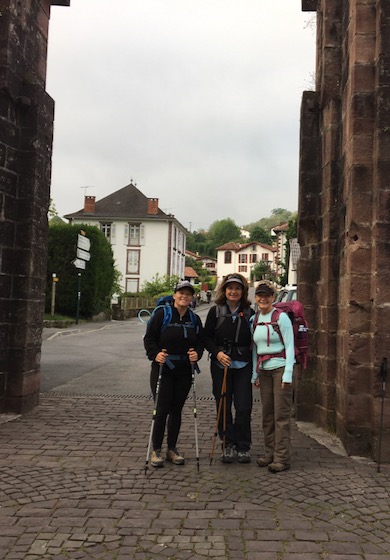 The trio of pilgrims (Martha is center) near a historic archway.

Jo met with her former priest, who had moved to a different parish. He said, “The Lord has a way of giving you a nudge.” He heard her confession and performed the anointing of the sick.

Jo began to read the daily meditations of Wilfrid Stinissen in This is the Day the Lord Has Made and “loved” it.  The time had come.  “I knew the walk would connect me spiritually.”  She watched the movie again and read books and websites.  In August of 2016, she decided. She’d walk the following May. Daughter Lizzie Hanner, who worked in Amsterdam, and good friend Martha Redmond, who’d accompanied her to chemo, agreed to join her.

Equipped with hiking boots, an edited wardrobe and a backpack, Jo met her fellow pilgrims in Madrid. They took a train to Pamplona and a taxi to SJPDP (St James Pied de Port). The 3 pilgrims (peregrinos) met at the Pilgrim Office to register and pick up their certificates. The walk took them through small towns and big cities, over mountains and across fields. They stayed in numerous albergues—private homes, municipal buildings, convents. They made friends from Australia, New Zealand, Germany.

Pilgrims went out of their way to help each other. “It’s an incredible way to see the best of mankind,” Jo says.  One day they were caught in a deluge. “We were soaked to the bone and freezing.” A man in a Jeep. painting pictures of churches along The Way, drove them to the next town. For one pilgrim who had ankle trouble, Jo wrapped his foot with sports tape. (He made it.) 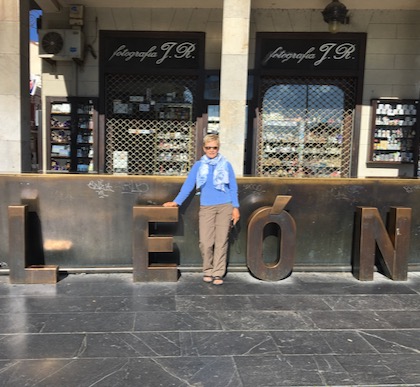 Jo in Leon, once the heart of a great medieval kingdom in Spain.

Descending the Pyrenees, Jo says, her boots were “killing” her. She taxied to Pamplona and purchased trail shoes and unguent at Caminoteca, a sporting goods shop open on Sundays from 8-8—unlikely hours in Spain.

Many people undertake the Camino to leave some burden behind. About half way through the journey, the Cruz de Ferro, or Iron Cross, rises from a mound. Pilgrims bring a stone with something written on it to leave at the foot of the cross.

The day they neared the Iron Cross was foggy. They couldn’t see ahead.  “About half a mile away, I started getting very emotional. When we got there, I walked up to the cross, set my stone against the pole, and just cried. After I left, I felt lifted, like I’d been touched by the Holy Spirit. I’ve continued to feel that way. 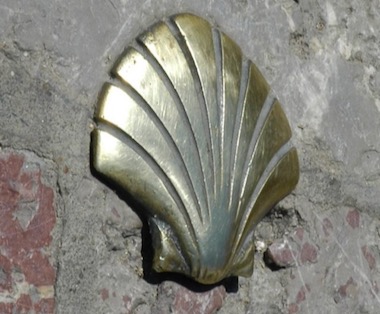 One of the shell-shaped symbols that guide pilgrims along the way. This one is in Leon.

“I’d been spending too much time worrying about whether cancer would come back. I realized I had to leave my worries behind. If cancer does recur, it does. I can’t stand back cowering. I need to move forward.”

After 35 days, the trio reached their destination, showed their Credencial (pilgrim passport) and received their Compostellas. They reconnected with friends they’d met along the way. “There was lots of hugging and high fiving.” Jo was “a little let down” to see the old cathedral, which stands above a large plaza. It was covered in scaffolding. But the next day made up for it. She attended a pilgrims’ mass, held every day at noon. She got to see the Botafumeiro, a giant incense burner that expels smoke. Several robed men swung it back and forth—a tradition normally reserved for Holy Days. Jo witnessed it that day.

In all, the 3 pilgrims covered almost 500 miles.

About the Camino, Jo says, “I’ve had many good adventures, but this was probably the most wonderful experience of my life. It showed me how much stuff we don’t need, how simply we can live. It made me kinder, more tolerant, more spiritual.” She can’t wait to go back.

Thanks for trusting me to share your story, Jo. Keep walking forward. 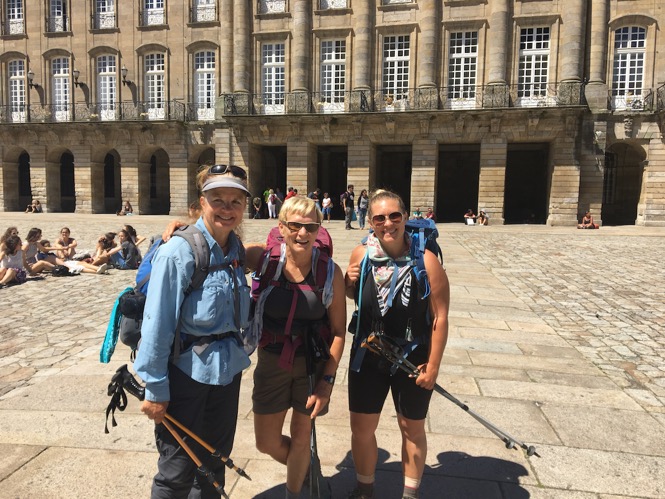 The trio in the plaza of the cathedral at Santiago.

(Personal note.  I totally buy into the exercise, spiritual and companionship parts of the adventure. But dorm-like sleeping quarters? Another story. I require silence, white noise, a luxe mattress and one companion, max. I’m a nocturnal princess. Jo, you’re a trooper!)