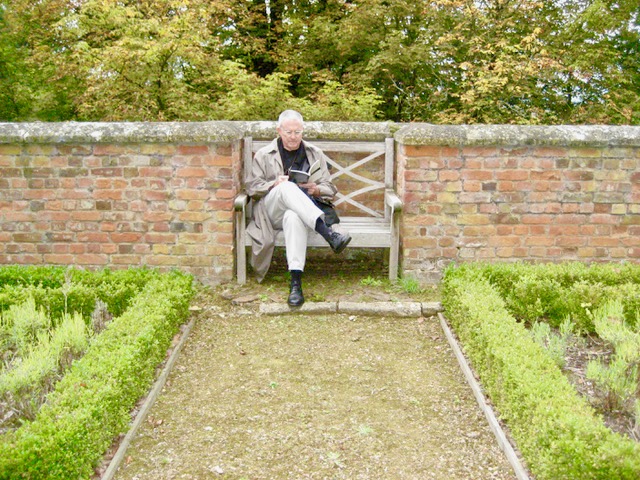 While touring sites related to T.S. Eliot’s The Four Quartets, Mary Lou took this photo of Tom reading some of his poetry at Burnt Norton.

My friend Mary Lou is a quintessential survivor.  I’m  happy to see how gracefully she’s landed on her feet.   We met 30+ years ago at a tough time in her life. Our sons, Reed and Andy, were in a class at Cranbrook School, Bloomfield Hills, MI.  Mary Lou and I met at parents’ day; we bonded instantly.

Mary Lou came from Kansas City where she was a graphic artist and involved philanthropist.  She was married to a scion of a family of successful real estate developers.  She created stunning graphics for clients including the Nelson-Atkins Museum and the Junior League.  The cookbook she designed for the latter is in the Cookbook Hall of Fame.  (Cookbook Hall of Fame?  Who knew???)

Mary Lou’s then husband turned out to be a “dishonest” businessman (her tactful way of putting it).  He lured dozens of their good friends into dubious investments.

Godsign alert.  In 1987, newly aware of her husband’s travails, Mary Lou attended a lecture by Katherine and Michael McCoy at the Kansas City Art Institute.  The McCoys were then co-chairs of the renowned Design Department at the Cranbrook Art Academy.  Hearing them at what she calls “the darkest moment” of her life, she wished she’d been able to attend Cranbrook.

Mary Lou wanted her children to avoid the trauma of what became their father’s very public trial and  prison sentence. She moved to Michigan, with sons Brad and Reed, to enroll her boys at Cranbrook School.  She attended the Cranbrook Art Academy to obtain an MFA.  All received scholarships and lived in faculty housing. Later, she and her husband divorced.

After all 3 had graduated, Mary Lou moved to Chicago.  She was creative director for Arthur Anderson, which became Anderson Consulting/Accenture.  Though Mary Lou remained a single working gal in Chicago, she never lost her love for Kansas City. 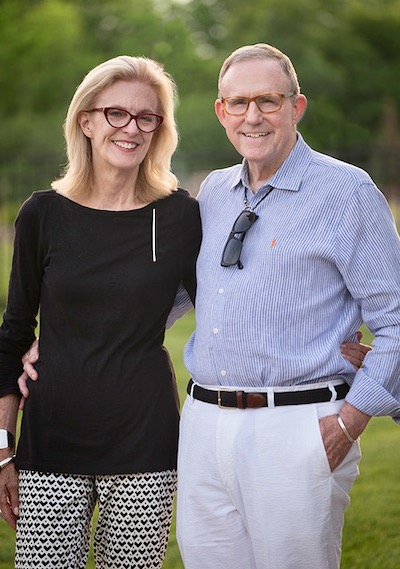 Scene change.  10 years later, in Kansas City, well-loved Patty Brous died of lymphoma after a long battle.  Before she died, Patty asked her best friend Sharon Hoffman to “take care” of her husband, Tom.   Sharon was also friends with Mary Lou.  Wheels started turning.  After selling her house, Sharon suggested Mary Lou come for a last visit, and while in town, attend the Kansas City Art Institute Auction.  And by the way, would Mary Lou meet Tom’s daughter, Anna Brous, who’d moved to Chicago?  To help acclimate Anna to her new town, Mary Lou took her to lunch.

Unknown to Mary Lou or Tom, Sharon was executing her strategy.  She invited a few friends for “drinks in the kitchen” before the auction. She told Mary Lou who was coming, including Tom whose daughter Mary Lou had just met.  Mary Lou remembered him from high school.  He’d been a BMOC, 2 years ahead of her.  As she puts it, “We were all aware of the upperclassmen.  Tom was head of the senior class, voted Most Likely to Succeed.  An athlete.”

Mary Lou, Tom and I met for lunch several weeks ago.  She recalled Tom as “the fastest guy on the track team” in the citywide meet.  Tom said, “That means I came in 5th.”

Back to Sharon the Matchmaker’s kitchen.  As Mary Lou sipped pinot grigio, Tom walked in.  Mary Lou recalls, “I’d been single for 12 years.  I’d just met his daughter.  I wasn’t shy about walking up to him.  I gotta tell you sparks went off.”  The twosome talked all evening.

Tom, a corporate tax lawyer (now retired), was coming to Chicago the next week on business.  He took Mary Lou out for dinner, then asked for the next night.  When he came to Mary Lou’s apartment, he brought a book, TS Eliot’s Four Quartets inscribed with a note about what the poem meant to him.

Mary Lou said, “You’re not going to believe this.”  She led him to her reading chair.  Beside it: a stack of books including The Collected Poems of T.S. Eliot.  One corner of one page was turned down; one passage highlighted in yellow.  It was from “Four Quartets.”  Mary Lou had read it many times.

“I said to my soul be still and wait without hope, for hope would be hope for the wrong thing; wait without love, for love would be love of the wrong thing; there is yet faith, but the faith and the love and the hope are all in the waiting.  Wait without thought, for you are not ready for thought.  So the darkness shall be the light, and the stillness the dancing.”

Mary Lou says, “After being single for so long, the poem spoke to me.”

(Personal note: It speaks to me, too.  During Burton’s current health crisis, I’ve repeated the lines over and over, working to memorize them and accept the wisdom.) 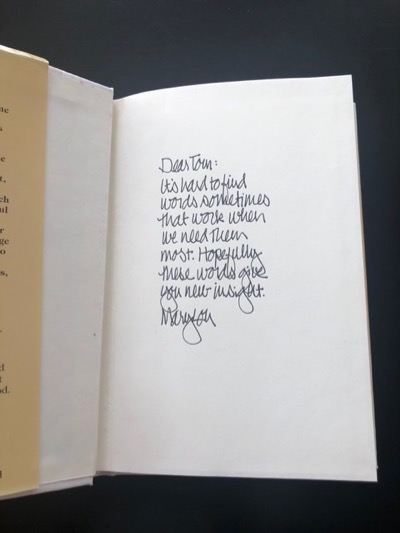 The Godsigns continued.  That same night, on their 2nd date, Mary Lou had also inscribed a book to Tom.  She said, “I’m not in the habit of giving inscribed books to my dates.”

The book was CS Lewis’ A Grief Observed about the author’s loss of his wife.  Lewis and Eliot  were both intellectuals who worried about the aftermath of World War II.  Both were featured in Alan Jacobs’ influential The Year of Our Lord 1943, which argued that Lewis and Eliot were Christian Humanists.

Tom and Mary Lou married 4 months later in 2001.  I’m pleased to have attended their wedding.  During the service, they read from the “Four Quartets.”

“…We shall not cease from exploration, and the end of all our exploring will be to arrive where we started and know the place for the first time.” 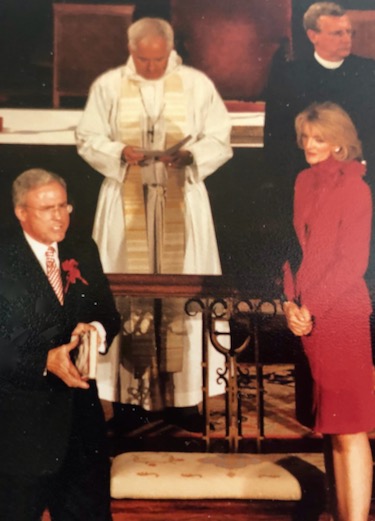 Tom preparing to read at their wedding.

Tom’s an avid reader, especially of books about history.  His romance with Mary Lou rekindled his interest in Eliot’s “Four Quartets.”  For their 10th anniversary, the couple visited  the sites that inspired Eliot’s poems, 3 in England, 1 in Gloucester, MA.  Their favorite site was Burnt Norton near England’s Chipping Campden.  Burnt Norton was the title of and inspiration for the first of the “Quartets.”  The current owner of the Burnt Norton estate invited them to stroll the grounds.  They sat in the box circle mentioned in the poem and read from it.

Tom’s fascination with the poem and with Eliot’s interest in mysticism inspired him to write and publish a short book, Why Read Four Quartets? “Four Quartets” was composed between 1935 and 1942.  Eliot lived for 23 years after publication and lectured often but never published another significant poem.  Tom’s working on a sequel examining why.

T.S. Eliot is also known for The Waste Land and The Love Song of J. Alfred Prufrock.  His body of work earned him the Nobel Prize for Literature in 1948.

Thanks, Tom and Mary Lou, for reminding us of the wisdom of waiting.  And for sharing your own Lovesong.