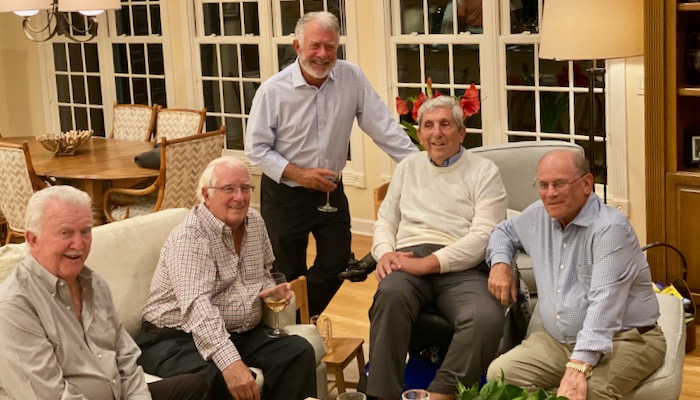 Burt Farbman’s the guy who makes the call. When a friend is sick or down on his luck, or scores a deal or wins an award, Burton makes the call.  Having lost his father when he was 11, Burton has antennae that cue him with the right thing to say.

Others may lament: “I wish I had” or “I probably should.” Burton never needs those words.  He doesn’t shy away from the tough or tender conversation.

Now Burton’s taken on a new role. This legendary businessman-developer-philanthropist-farmer-equestrian-golfer-fisherman-hunter-father-grandfather-brother-husband-friend has been sidelined by brain cancer and the after-effects of surgery. This is a hero who didn’t flinch (well, maybe a little) when I published a memoir about our marital struggles; who even went on national TV with me and owned up on Oprah.  A hero whose contrition influenced thousands of viewers and readers to give their relationships another try.  This is a partner who oversaw and championed my recovery from stage 4 cancer.  A fun maker who creates full-sized trophies for family championships from ping pong to Boggle.

This all-around good guy is now on the receiving end. Because Burt extended friendship to so many others—they now are strengthening him through those relationships.

Barry Shapiro, one of his besties, drove from his condo on the Sarasota bay to our house in the boonies to watch every football game last fall.  Michael Kramer and Curt Slotkin, 2 more Burt besties, drove across state from Palm Beach to hang out with my man while I was in the D.

Recently, 8 more FOB came to visit: Richard Aginian, Bill Baer, Doug Blatt, John Broad, Jim Nicholson, Ron Palmer, John Piceu and Greg Smith.  They belong to a forum formed more than 30 years ago through YPO (Young Presidents’ Organization).  They flew to Sarasota to join Burton for dinner.  (Richard, already in SRQ, drove.)  Forum member David Fischer, now overseas as a US Ambassador, called from Morocco.  The next morning, the group came to our house to share birthday cake with their buddy.

Burt’s cousin Judie Koploy joined us for dinner most nights in the D and flew to Florida to facilitate our move.  We often dine on rotisserie “fenceless” chicken.  Years ago Judie was making dinner.  Son Edward, then about 4, asked what she was cooking.  Judie showed him Cornish game hens.  He said, “We’re eating those poor little fenceless chickens?”

Support of many friends has boosted our morale. Sue Hokamp invited us to her house to celebrate Burton’s birthday.   Lee and Patty Chaplin invited us for a bird ballet. Thousands of winged creatures swooped down on the island below. Our adored aide Fayez (aka Faisal J, the in-house rapper) facilitates our outings.  Roger Kasle played checkers with Burton most days in the D.  Artie Greenstone brought over a nurse consultant.  In SRQ, Jim Billings, Bob Fritsch, Stephen Proctor and others drop by to keep Burton company.  Our family provides off-the-charts comfort.  And many girlfriends check in or make plans with me.

It’s easy to be a friend during the good times.  In 52 years of marriage, there’ve been loads of good times.  But as for friendship, when the chips are down—that’s the true measure.

Recently, Richard Francis, a Florida friend from Montreal, and his wife Maureen visited.  In October, 1991, Richard was diagnosed with stage 4 Non-Hodgkins Lymphoma.  His doctors didn’t think he’d make it to Christmas.

Richard kept fighting.  In 1993, Dick Rebolledo, Richard’s friend from New York, called him.  Dick, then 80, said, “Sydney, Australia, was just selected as the site of the 2000 Olympics.  Let’s buy tickets.”

Richard says, “We laughed and joked about which events we’d attend. The call really touched me.  Dick’s message was clear.  Never stop making plans.  Never give up.  Friendship is everything.”

Thanks, Richard, for the reminder.  Thanks, pals near and far, for being there.  For keeping us in your thoughts and prayers.  Your friendship makes all the difference.

2 thoughts on “When the going gets tough, friendship means everything”