In times of crisis, prayer is my number one go to.  Number two: booze. These days the order is debatable.  Some clever posts have shown up on social media lately.  One begins: As a result of this crisis, 50% of us will become better cooks. 50% will become alcoholics.

In a recent column, Peggy Noonan wrote about the fact that with so many businesses closed, liquor stores remain open.  “…there isn’t a politician in the country stupid enough to prohibit alcohol in a national crisis.  They may know on some level that no nation in the history of the world has closed both its churches and its liquor stores simultaneously and survived.  Russia after the revolution closed the churches but did its best to keep vodka available because they wanted everyone drunk, which is the only way to get through communism.” 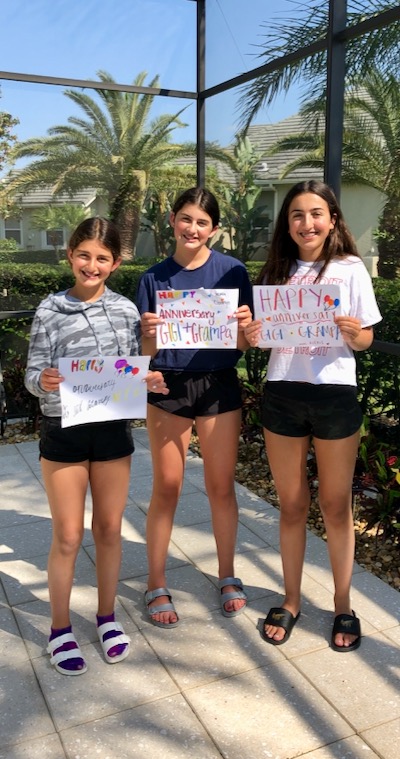 ONE OF MANY IMAGES OF HOPE! From Left—Granddaughters Lindsay, Camryn and Alexis Farbman visit our lanai to wish us Happy Anniversary at a safe distance. social distance

Friends have been posting gorgeous photos of meals they’ve been making.  I look at them with awe.  Wishing I were at their table.  And I turn back to my crossword puzzle.  Or to whatever I’m reading.

I’m currently reading Erik Larson’s The Splendid and the Vile –perfect for the moment as it deals with another of the worst periods in modern history.  In that case a visible enemy.  It examines 1940-41, years in which France capitulated, Britain suffered constant bombings and Churchill rallied his country (and eventually ours) to face down the Nazis.   After evacuating more than 330,000 Allied soldiers from Dunkirk on whatever vessels could be had, the P.M. used his epic oratory skills to uplift his nation.  .

“…Hitler knows that he will have to break us in this island or lose the war.  If we can stand up to him, all Europe may be freed and the life of the world may move forward onto broad, sunlit uplands.

“But if we fail, then the whole world, including the United States, including all that we have known and cared for, will sink into the abyss of a new dark age made more sinister, and perhaps more protracted, by the lights of perverted science.  Let us therefore brace ourselves to our duties, and to bear ourselves, that if the British Empire and its Commonwealth last for a thousand years, men will still say, “This was their finest hour.”

Even before this pandemic I teared up upon hearing that speech.  As we stay home day after day, witnessing the toll this disease takes, it feels as though we’ve fallen into another abyss.  Hopefully we’ll be saved by an inspired and uplifting science.  By remarkably selfless and brave medical professionals.  And by the fight in which we’re all engaged—staying home, saying prayers, sewing masks, delivering food, donating money.

I wonder about the long-term effects of this pandemic.  What will it do to our values?  Our social consciousness?  To my favorite city in the world: Manhattan?  I read about a stunning new high- rise residential tower in New York.  Deposits were put down months ago on multi-million dollar condos.  A clause lets buyers walk away if the building isn’t finished by a certain date.  That date fast approaches.  Will more and more such buildings stand empty?

Shopping with girlfriends has been one of my favorite sports.  I worry about retail stores and malls, already challenged by Amazon.  Will in-person shopping decline?

Will the current ethos of stay home/stay safe/save money carry over?  Will it change our thinking and spending decisions?  And will that be bad or good?  Will religion and/or spirituality play a bigger role in our lives?   Will we become more altruistic and less self-centered?  Or revert to spending excess and monetary displays?

The free world roared back from the brink after WWII.  But I’m guessing we’ll emerge from this pandemic somehow changed.  More sober.  Less demonstrative—physically and financially.  Less flashy.  I’m a hugger.  My sister, Anne’s, an even bigger hugger.  She hugs strangers on first meeting them.  I hate to think of a hug free world, but casual embraces may be gestures of the past.   Even shaking hands is up for question.

I’d love to hear your thinking.  Will you go on a spending spree post-pandemic or will you rein in?  Will your behavior change?  Please share your thoughts in the comments section of this blog.  Thanks.

Meanwhile, stay safe.  And may we once more move forward unto broad, sunlit uplands.

21 thoughts on “Will Covid-19 change the way we think, feel and behave?”