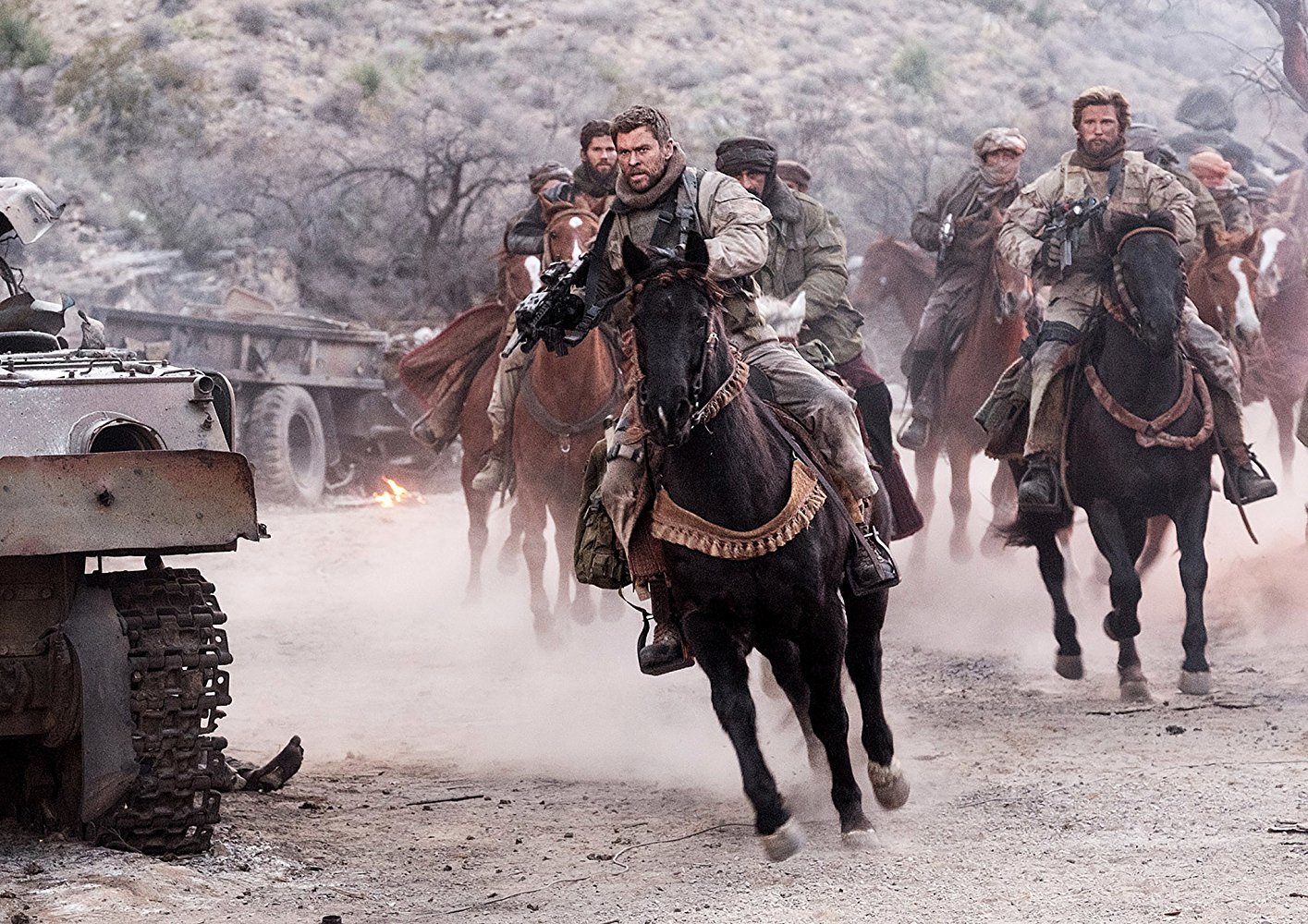 Keep alert, stand firm in your faith, be courageous, be strong.

The 12-member Army’s Special Forces team depicted in this film certainly lived up to the words of the apostle Paul’s charge to his church in Corinth. Director Nicolai Fuglsig’s film is based on Doug Stanton’s non-fiction book Horse Soldiers, about the CIA paramilitary officers and U.S. Special Forces sent to Afghanistan immediately after the September 11 attacks. The team was so spectacularly successful we would think that the story was written by a Hollywood publicity agent were it not for the impeccable record of journalist Doug Stanton, whose previous book In Harm’s Way: The Sinking of the USS Indianapolis and the Extraordinary Story of Its Survivors was on The New York Times bestseller list. Otherwise we might suspect this is a remake of The Dirty Dozen, though in a cleaned-up form.

At the beginning of the film Captain Mitch Nelson (Chris Hemsworth) is retiring from the military so he can spend more time with his neglected wife (Elsa Pataky) and daughter (Marie Wagenman). When they watch in horror the attack on the Twin Towers, Nelson rushes over to the base and wrangles back his old command and team. Although warned that none of the team might survive the dangerous mission, Captain Nelson assures his commander that not only will they do so, but that they will complete their assignment to defeat the Taliban within the three-week time period. (The names of the Americans were changed for security reasons at the time of the script writing.)

With Chief Warrant Officer Hal Spencer (Michael Shannon) second in command, the 12-member team are soon parachuting into Afghanistan where they link up with forces led by General Abdul Rashid Dostum (Navid Negahban) of the Northern Alliance. The Captain and the General relate well, with the Afghanis providing horses for the Americans to navigate the steep slopes and valleys of the rugged mountains.

There begins a series of exciting battles, the well-equipped Green Berets being able to call upon American warplanes to rain down fire upon their Taliban opponents. Some of the men have to learn horsemanship on the gallop, but thanks to the speed and mobility of their mounts, they are able to move quickly in their campaign to recapture a number of villages where the Taliban are entrenched.

Most of the time we see the Taliban only at a distance, dressed in black, shooting or falling while spouting blood beneath the bombs dropped from planes so high up that they do not hear them coming. We are given a closer look at their stern-faced, black bearded leader gazing toward his enemies, reinforcing the image of the Evil Muslim Terrorist most of us hold in our minds. Just how evil they are we see in one wrenching village scene where the warriors have rounded up several young girls suspected of attending school. When one proves that she can read, she is promptly executed. We might regard this as a typical ploy designed to show how Evil the enemy are and how Good our soldiers are, except that such incidents did happen—not just in Afghanistan, but in neighboring Pakistan, as witness the uplifting film about Malala Yousafzai, He Named Me Malala. This complicates the argument as to whether we should leave Afghanistan because the fighting keeps dragging on and on or staying to protect the country’s girls and women from such a terrible fate.

The depiction of the Americans is as we would expect, that of courageous men under fire, totally dedicated to one another and their mission. They bond with locals, in particular a couple of young boys who pick up rifles and join them. That the Americans’ concern for Afghanis is not just window dressing has been proved, in that the American Captain, whose real name is Mark Nutsch, continues to this day, along with his wife, to support rural aid and educational projects in Afghanistan.

There is tension between the team and General Dostum, the latter having fought against Soviet and other invaders for several decades. At first skeptical of the newcomers, the war  lord recites the truism that Afghanistan is “the graveyard of empires.” Just before the strategic attack on the fortified Mazar-e-Sharif, the 4th largest city in the country, he withdraws his forces because he believes the casualties will be too high, the Taliban being armed with tanks and mobile rocket launchers.

The climactic battle is about as exciting one as you are likely to see. At such a time my old concern that the Enemy is objectified, as in a video game, so that I no longer think of him as having a sweetheart, wife, or child, or how he is a victim of ideological hatred for foreigners. But this is not a film intended to get us to think about the larger picture—for that see The Three Kings, which has a powerful scene in which an Iraqi prisoner reveals why he hates Americans so much.

The makers of Twelve Strong want us to admire Captain Nelson and his team for their courage and dedication to one another. Both film maker Nicolai Fuglsig and the Captain achieve their goal. As a would-be peacemaker I am reminded that our patron saint Mohandas Gandhi wrote in his newspaper many times that if it were a choice between a man in danger having to choose between violence or cowardice, he would prefer that he choose violence, especially when the safety of others was also threatened. The Captain and his men certainly chose well, and so are deserving of the honor bestowed upon them. In NYC near Ground Zero there is a bronze statue erected by a grateful public in remembrance of this team. It is named “The Horse Soldiers.”

Some viewers will note the irony in what has followed this early victory Afghanistan, namely that we are still there 17 years later with no final victory in sight. We won the initial battles but, allied with various unstable, and sometimes corrupt regimes in Kabul,we remain stuck in the longest war  that our country has fought.

Note: I had the honor of interviewing briefly former Captain  Mark D. Nutsch, played in the film by Chris Hemsworth. The interview is now posted on my blog.

The amazing true story of how a team of 12 Spec. Ops joined with the Northern Alliance in Afghanistan in a string of victories over the Taliban after 9/11.
Editor Rating ★★★★★4.5 out of 5
More Details