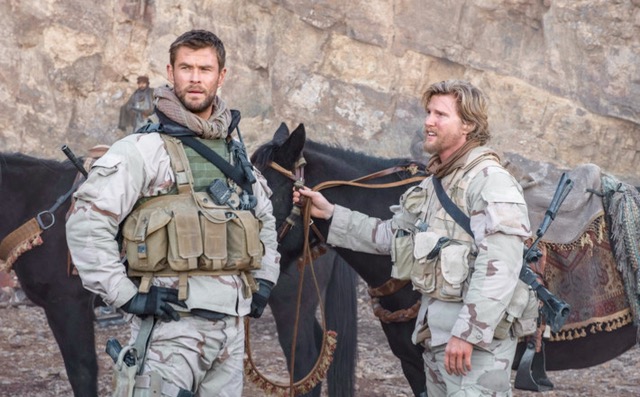 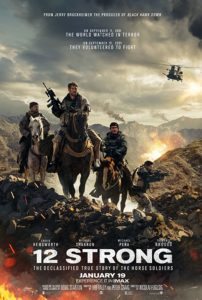 On the afternoon of January 11 2018 I was privileged to interview by telephone Major Mark D. Nutsch.  A captain in 2001, he was the team leader and commander of ODA 595, one of the first Task Force Dagger combined Special Forces teams sent to Afghanistan shortly after the Taliban terrorist attack on New York City’s Twin Towers. The story of his team’s fantastic adventures is told in the film 12 Strong, reviewed elsewhere on this site.

After exchanging greetings, the following transpired:

Mark: In the film 12 Strong I was portrayed by Chris Hemsworth. In 2001 I was Southern Forces Detachment Commander of the Army’s Green Beret, with the rank of captain.

Ed: The film is based on a book called The Horse Soldiers. Were you interviewed by the author?

Mark: Yes, years ago members of my team, including myself, was interviewed very, very briefly, and the book was published a number of years later and eventually purchased for a film. And it took 5 or 6 years for that film to be developed, and here we are.

Ed: Yes, and I could hardly believe the film, it seemed so much like a novel, the 12 of you accomplishing so much in such a short time.

Mark: I’ll tell you, we were so inspired by the first responders. Most of America was watching the smoking pile of rubble in New York or that hole in the Pentagon or that field in Pennsylvania. We had in a very short time. By the 15th of September our team was alerted for a mission and in final preparations to deploy, knowing our mission was going to unfold in Afghanistan. Didn’t fully know the details yet. But by seeing the TV and seeing the first responders and what America was doing, rallying around them at those tragic locations where 3000 of our American citizens and international citizens were murdered, we were honored to be on the first team to be sent into Afghanistan.

Ed: It’s good to know that. How did it feel to see yourself in the film portrayed by an actor?

Mark: Well, my 2 daughters and 2 sons take a little humor in the fact that Chris Hemsworth is portraying their dad. I don’t think they fully grasp or realize yet what the mission entailed, the sacrifices and the commitment that our entire team had throughout the duration of that extended mission—that mission was several months long. It wasn’t just one of these fly in on helicopters, step off for a few hours, you know, and get up close and personal in discussions with the enemy, and get on the helicopter and be home for breakfast. We were living it day in and day out, 24-7 in that situation, just pushing each other and pushing ourselves. My resilience to bounce back in time, we learned lessons we took some lumps, no doubt.

Ed: In the film there was a deadline set while you were being briefed?

Mark: Yeah, we—the Command actually didn’t set the deadline. They didn’t expect us honestly to survive the mission. They expected us to winter in the mountains with our local partner force, build that army in capability, and come down out of the mountains in the spring, and help our U.S. military conventional forces, the Army and the Marines, that would try and come in, because it was going to take them months to build up the force that they needed. Our local allies, Gen. Dostum and others from three different ethnic factions that had been utterly brutalized by the Taliban and Al Qaeda, they didn’t want to wait either. None of us wanted to hole-up in the mountains past the winter. We did it within 21 days–we had liberated the key city of Mazar-e-Sharif and the surrounding six northern provinces of Afghanistan.

Ed: That was incredible. Were you really as confident as Chris Hemsworth said, “Well get it done before that time, and we’ll all come back”?

Mark: No, because as I said, the Command was not imposing that time-line on us. We were confident. We were confident that our team was the one to send. Very much the spirit of our team was, “Send me. Send us. We’re the team that is trained, mature, ready. We’ve been working so closely together that we are the right team to put into this unknown situation. Let us figure it out…

Hal Spencer was the pseudonym of the character portrayed by Michael Shannon. Some Special Forces teams do get ready for a mission, they have to go into an isolation that cuts them off from any distractions, and then they plan the mission. And they brief the Command on what they feel is the best course of action to that meeting. Once we briefed our plan, the task force commander, looked at it and said, “Hey, that’s a pretty good plan,” because really nothing was happening, there was not very much information out there. So, we thought we put together the best plan going.

You asked something earlier about confidence, and here’s how the confidence resonated throughout the team. One of the questions that was asked, “Can you make it to Mazar-e-Sharif in a good time frame?” And we told him, “Well, we’ll give it our best shot.  If we don’t, the storms that come in will push us up into the mountains, but we will continue to fight from the mountains, and we will conduct ambushes, raids, everything we need to whip up the Northern Alliance forces, advising and training them in those types of operations. The last question asked of me was by Col. H. He said, “That will work, and what do you think you will gain from that?” And I told him flat out, “Well win! We’ll win,” so we had the confidence going in.

(The press agent announced we had just a brief time left—and unknown to me I was also at the end of the cassette recording tape, so the following is what I can remember from Major Nutsch’s answers to my last questions.)

To my query about the his experience with Muslims, of the people being more than the stereotypical one held by some Americans, he replied that some Muslims did, of course, have a distorted form of the faith that led them to do terrible things. But that was not the way the people he dealt with were. He visited in the homes of many while deployed in the country and found them warm and hospitable. He has maintained contact with some, including Gen. Dostum, who now is Vice President of the country. The Major has done more than staying in contact with people in Afghanistan; he and his wife Amy have been supporting rural development and educational projects in the country as well. Our all too brief time concluded with my thanking him for his service to our country and the honor of talking directly with him.

Mark Nutsch himself has appeared in a documentary film, Greg Barker’s Legion of Brothers that was featured at the 2017 Sun Dance Film Festival and broadcast on CNN in October. It tells the story of Mark’s group in northern Afghanistan in October 2001 and a second group that infiltrated the southern part of the country. His bio sheet states,”Nutsch is now a research analyst for the Instiute and a reservist in special operations, working on aerial intelligence surveillance and emerging field technologies. He provides analytical support on Syria and the ISIS network. During his service he earned Bronze Stars and was awarded a Purple Heart.