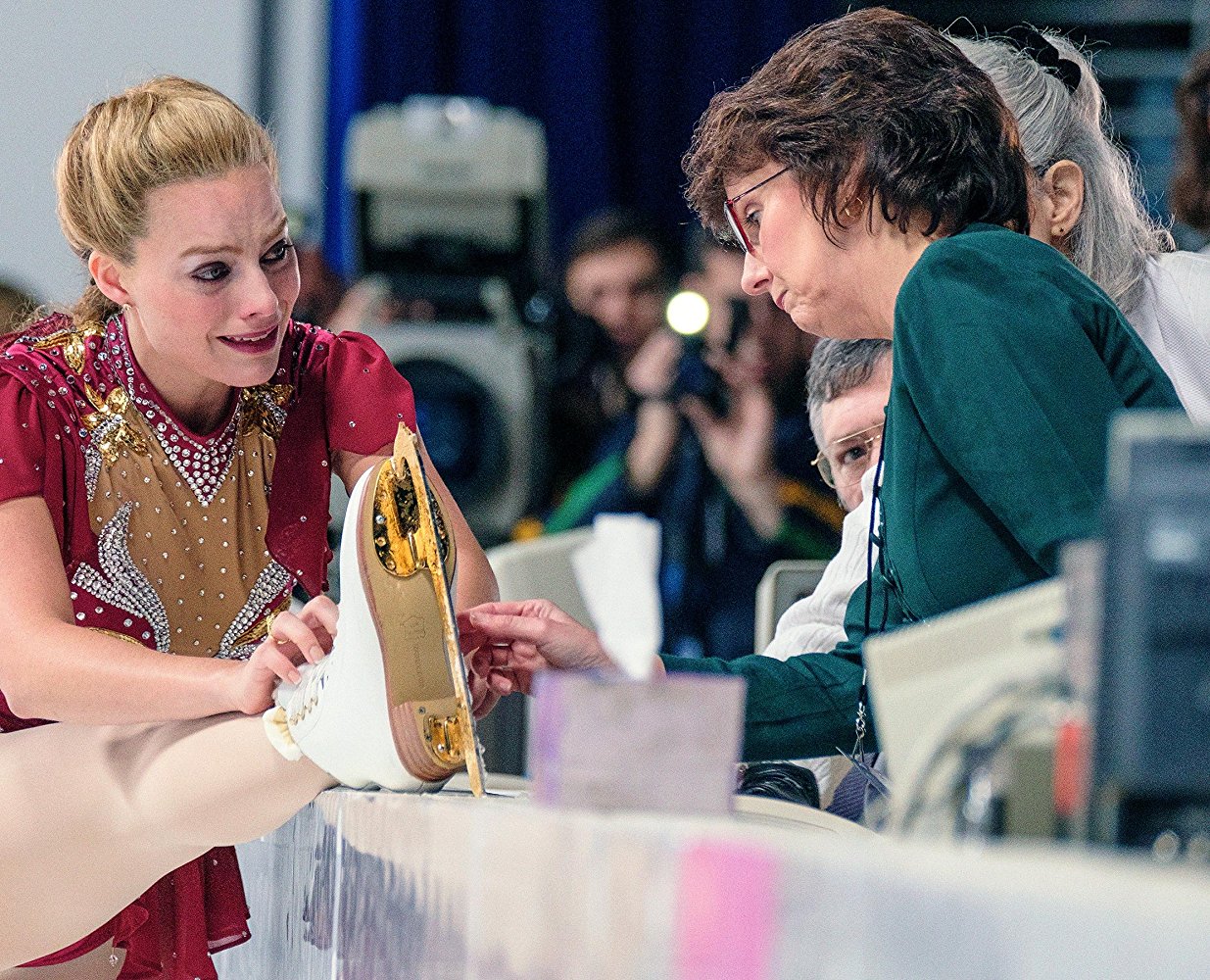 Again I saw that under the sun the race is not to the swift,

nor the battle to the strong, nor bread to the wise,

nor riches to the intelligent, nor favor to the skillful;

but time and chance happen to them all.

In between the commentaries we see that little Tonya was raised by an oppressive mother who embodies all the bad qualities associated with a “stage mother.” She compels the girl to practice long hours and allows her no friends—when Tonya stands next to another little skater at the rink, LaVona orders her to stop talking with her, stating that she is not her friend, but an enemy. When her daughter does not perform to her expectations, she yells profanity at her, prompting from another mother “Do not swear in front of the kids.” LaVona retorts, “I didn’t swear, you cunt.” The mother’s verbal abuse spills over into physical abuse as well, her cuffs sometimes becoming blows that leave bruises that make-up barely conceals.

LaVona is rightly opposed to her daughter’s romance with Jeff Gillooly, but the pair fall so deeply in love that Tonya pays no attention to her mother’s warnings. The couple’s honeymoon does not last long, Tonya discovering that she now has two abusers. She and Jeff quarrel frequently and make up until…

Out in public view on the ice rink Tonya’s hard work and great athletic ability attract fans, especially when she becomes the first female able to pull off a triple axel. However, her judges continually give her less points than her performance deserves. At times she loses her temper, making a scene as she expresses her frustration before the judges’ stand.

A key scene for understanding Tonya, at least according to this film, is set in an underground garage where the disappointed skater, seeing a judge get into his car, rushes over and taps on his window. Reluctantly lowering it only partway, he responds to her pleas as to why the panel gives her lower marks than her performance deserves: she lacks the wholesome image his skating organization desires. She tearfully asks why she cannot be judged just on her performance and not an image, to which there is no answer.

Tonya thus is presented as the classic outsider, always looking in on the more privileged. She smokes; chooses rock ’n roll rather than classical music for her performances; and is forced by her waitress mother’s lack of money to sew her own costumes, which cannot stand the comparison with the designer costumes of her competitors. She seethes that her fiercest competitor Nancy Kerrigan faces none of these, that indeed the judges seem to favor her.

Unfortunately for all concerned Jeff picks up on his wife’s angry frustration and through his friend Shawn brings about what they call “The Incident,” the kneecapping of Nancy, depicted like an incident from a Keystone Cops tale. There follows a media storm, with reporters camping outside Tanya’s house and following her around while thrusting microphone at her wherever she goes. She denies knowing of or ordering the attack, so the public becomes deeply divided concerning her. The legal trials resulted in Tanya’s agreeing to a plea bargain of guilty. This kept her out of jail, but her banishment from figure skating forced her into less savory enterprises, including women’s boxing.

Although the film favor’s Tonya’s claim that she did not instigate the attack on Nancy Kerrigan, it does show her faults, even as it portrays her as the outsider. Perhaps the only likeable major character in the film is Tonya’s long-suffering first coach Diane Rawlinson (Julianne Nicholson), whom we see at first refusing LaVona’s request to coach her daughter because at three-years she was too young. But when the undeterred mother sends her little girl out onto the ice, the coach perceives her great talent and changes her mind. She puts up with a lot of grief from her charge, breaks with her at one point, and then agrees to return and coach her again when the skater has a good chance of entering the Olympics. During the dark period following the attack on Kerrigan she defends her.

I, Tonya is not an uplifting story, but then real life often is not either. No matter how they try, filmmakers cannot clear away the suspicion that the abrasive skater was guilty as charged. She began as an outsider, and will end her life as an outsider, with people continually disagreeing as to whether or not she deserves to be one. What do you think—is she more of sinner or sinned against?

Ice skater Tonya Harding is depicted as the talented outside kept there by American classism.
Editor Rating ★★★★★4 out of 5
More Details