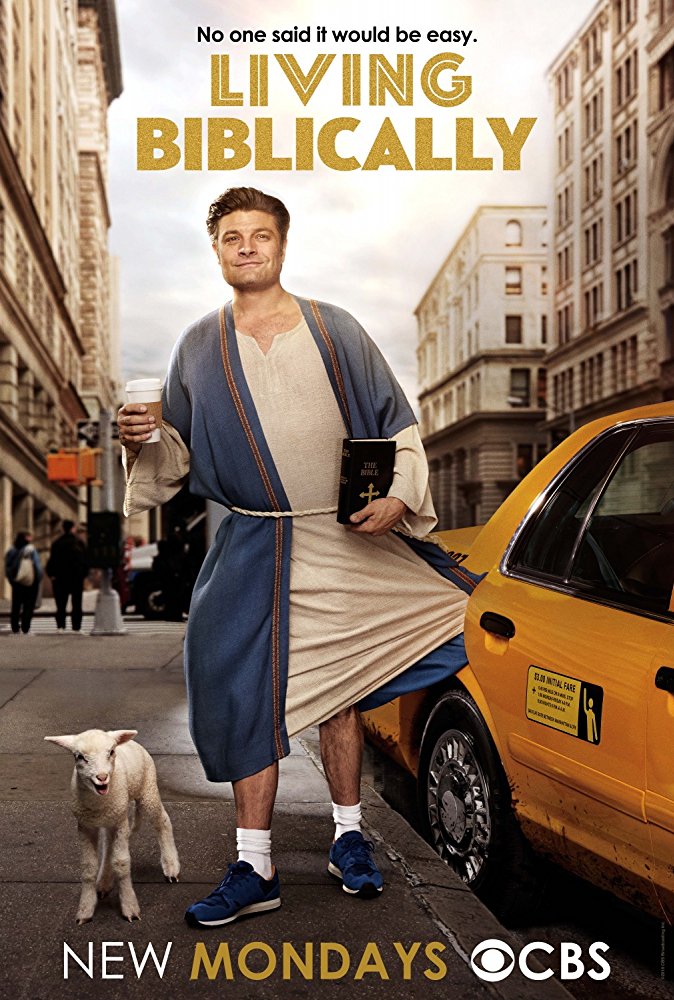 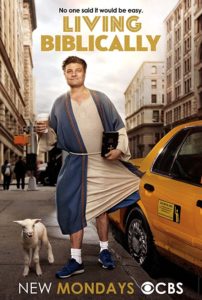 Patrick Walsh was born in Missouri and studied film production at Webster University in that state. He moved to NYC where as an NBC page he worked on “Late Night with Conan O’Brien” and “Saturday Night Live. “In 2006 he participated in NBC’s “Writers on the Verge” program in Los Angeles. Some of the programs he has been associated with are “Outsourced,” “2 Broke Girls,” “Rob & Big” and “It’s Always Sunny in Philadelphia.” He also was an actor in the latter series. Last year he wrote for the 2017 White House Correspondents’ Association Dinner, hosted by Hasan Minaj.

After preliminary greetings during which I mentioned that I had been able to preview three episodes, the following took place. There are a couple of places on the tape where a word or phrase is unintelligible, so I have summarized that portion, the over-all meaning not impaired.)

Ed: How did you become involved in this project?

Patrick: I was looking for something to do, a new project, was sitting in the library, and there was just the same ole same ole stuff (on the screen). People frantic, living in L.A., or whatever, and I was bored. I saw this book by A.J. Jacobs, I had never read it. Took it home and read it in a night. I got all excited about it, and I felt excited about the prospect of adding a show based on it, because I don’t think there’s anything quite like this on the TV right now.

Ed: There certainly is not. The closest would be many years ago when ABC ran the wonderful series NOTHING SACRED, which took a more serious approach.

Patrick: I don’t know that one. I’ll have to look it up.

Ed: There’s been a campaign to get ABC to release it on video, so I think a lot of my readers will be interested in your series. You wrote the first script, and now you have others writing, apparently.

Patrick: Yes, the three you saw are not in order. I think you got one, two, and seven. I have more down the road.

Ed: I appreciate the balanced approach you took in the episode in which the atheistic mother-in-law comes to visit. In their arguing neither one is put down or made fun of. They both have their valid points and are allowed to make them.

Patrick: Yes, that was very important.

Ed: It is, for I was very turned off by a faith-based film called GOD IS NOT DEAD because the part of the atheist was written so poorly. Naturally, the Christian won in that film. I like your approach, because neither wins—it’s that they just try to understand each other.

Patrick: Well that’s the goal of the show. I have a writing staff that’s made up of atheists, devout Christians, Baptists, your people. We’d have discussions every day. No one ever won in the discussions, but we all walked away, you know, I would say as better people, a more understanding people. That was the thrill of the job, to have them, to have discussions every day in the writers’ room, because that’s usually not discussed, I’m certain, in the writers’ room. That’s the point of the show, “Let’s try to understand each other here in America, I hope, even for such in a brief period.” It’s a rough time.

Ed: It is. We seem to be screaming at each other, rather than talking with each other.

Ed: Now, you’ve dealt with the issue of science and faith, and even—what else did I see—yes, adultery. I love the stoning scene. I wondered how you were going to handle that issue. (We both laugh.)

Ed: OK, you’ve answered a question I had. This is filmed in front of an audience, so you don’t have one of those phony laugh tracks.

Patrick: It was filmed 100% in front of an audience, and I actually would not allow them to doctor the laughter in any way. So, if a joke didn’t work, we changed the joke, until they laughed. The only thing we did was to cut them for time.

Ed: So, you had some try-outs, in other words.

Patrick: Yes, that’s fairly standard for a multi-camera sitcom like this with a live audience. If a joke bombs, which is always going to happen, then the writers huddle up and find a way to beat it. When you write ahead of time, that’s a great thing about having an audience. You know, a concern, when you’re going to do comedy, is how you’re going to affect people, and you can hear right away if the line went too far–you’ve heard from the audience right away. You’d address that as well. Then also, you can see the subject that really gets their interest, like the prayer in the scene that you watched. I was there with a Baptist, and it worked for Tom. We were kind of exploring faith and prayer and all this stuff—and we could see if the audience was really invested in it.

Ed: What are some other hot issues you might be dealing with—episodes that I’ve not seen, or that you are planning?

Patrick: Well, I would say the fundamental issue we had this year was a show called “Submit to Thy Husband,” which was about the misogyny of the Bible.

Ed: I wondered if you were going to deal with that.

Patrick: Yes, that’s something that, you know, that modern women have a lot of issues with the Bible, and I understand those issues. We discussed them at length. You know, basically there’s Leslie his wife, who was not raised religious—we discussed this at length. There are all these verses (about husbands and wives), so that this is “the tip of the iceberg.” Leslie is terrified that her husband is now living 100% by the Bible, and will start acting this way, start thinking this way in their marriage. They have it out, and at the end of this, that’s the one instance where at the end of the episode I want to go for a more modern interpretation of this verse. I think it pertains to each other as a husband and wife. I think there was a time when the man was the head of the household, then they were the same, then the change, “Let’s commit to each other, let’s be there for each other,” and, that is a controversial point of view.    I will say that the audience that we had really loved that moment—still, I think it didn’t change anybody’s mind on the subject, but I hope that it makes people think about the topic. There are also certain aspects about the Bible that don’t seem to fit into the modern world, and that’s one where there still is, trying to figure out what you can do as a modern-day person and what you can’t. That was the sorest subject matter that we addressed, though we’re certainly not opposed to the point of view expressed because I think it makes for really interesting television.

Patrick: I hope so.

Ed: I love it that you bring in the interfaith aspect with the rabbi character, who’s very important for interpreting the Old Testament. Will he bring in some interfaith type issues?

Patrick:  Yeah, though they’ll take a back seat. I want to focus on Rabbi Gil and Father Gene as characters. That was really important to me. I was raised Catholic, and that’s what I know. It was very important to me to have a religious group that was very diverse, and that a (real) priest and a rabbi read every draft of the script. They would tell us when–I think they were versed with a better ear– “I don’t think a priest would say this,” or “I don’t know that a rabbi would say this,” etc. “You’re just flat out wrong about this, that’s not true…” When they came in, they didn’t know each other, our priest consultant and our rabbi consultant, we had allotted a half hour, but it wound up to being two or three. It was so cool to see these guys riff off each other. They had so much respect for each other. They were making each other laugh, they were cracking jokes. It was just really fun…When we taped the episode, members of the audience said they didn’t know that a priest and a rabbi could be friends. That’s cool if people take that from it, then that’s great. It’s about the importance of tolerance and understanding of people in terms of religion and in terms of everything.

Ed: Have you thought of introducing a Muslim character in some way?

Patrick: We’ve thought about it I certainly think we would do that, and the reason we did not this year is because we do not have a Muslim writer on the staff. I don’t know enough to take that slant on my own, but we would love to.  We did go to a Baptist church this season to see them– and we would love to see Chip go to a bunch of different faiths and explore and learn about them all.

Ed: Good. Now, I see in a sense you are dealing with racism by having Vince, who is an African American. Will you be dealing with the latent racism that is within our country? Does his being black become an issue at any time?

Patrick: Well…there are a few instances, but not a full episode or anything like that. I think the important thing is that the script has to be kind of subtle. I wanted a priest and a rabbi that could be friends. I think this could send a powerful message…they are making connections and getting along, though they come from different places. I think we’ll accomplish a lot more.”

I expressed my appreciation that there also is an Indian character in a few episodes. Patrick observed that the show is set in New York, and “we want the show to be a melting pot and represent America.” I mentioned my reservation about the over-acting of the actress playing Vince’s girlfriend (see my review of the series on this site), to which he did not react defensively. We discussed briefly the comedic approach to religion and the risk of some viewers being upset by this, as happened years ago when the film OH, God! upset a lot of people. Then there was a comedian who was the son of a rabbi retold Biblical stories in a very funny way on a late-night talk show. Patrick, obviously recognizing the danger of his comedic approach, replied that our hearts are in the right place, his staff wanting to show the positive effects of faith in a person’s life. Our all too brief conversation ended with each of us wishing the other much success.

A New Yorker wanting to change his ways decides to live literally by the Bible, with amusing results.
More Details