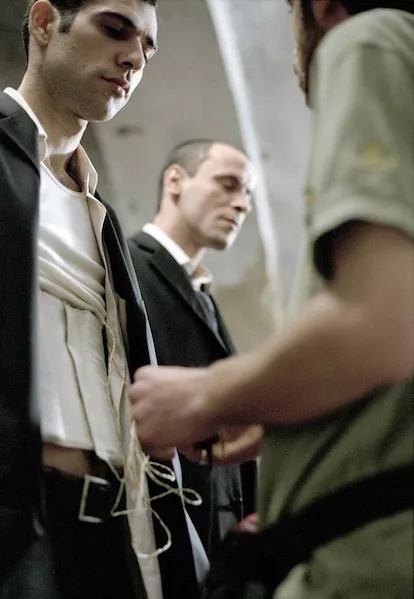 (Arabic and Hebrew, with English subtitles)

I call heaven and earth to witness against you today that I have set before you life and death,

blessings and curses. Choose life so that you and your descendants may live…

Not as well known as Steven Spielberg (maker of Munich), the Israeli-born Palestinian director Hany Abu-Assad also deals with those who kill on behalf of their homeland and their religion. Said (Kais Nashef) and Khaled (Ali Suliman), life-long friends, are young auto mechanics in Nablus in the West Bank who have been recruited to enter Israel as suicide bombers. We follow them for the next 48 hours as they go through preparations for their mission, neither of them telling their families of their mission. Said’s mother senses something different in her son at their evening meal, but he does not reveal why he is more pensive than usual. The film’s title comes from the reply to the question of what happens after each detonates himself, “Paradise now.” “And what then?” “You will be met by two angels.”

The two tape their last words, for family and for televising, the two stating their reasons for their self-sacrifice, one of them upset that the Israelis have stolen the victimization that he believes rightly is the Palestinians. The video camera malfunctions at one point, adding to the realism of the scene. (Does this ever happen in a Hollywood high tech thriller?)

Said is the main focus, he having to live with shame because his father had been executed for allegedly collaborating with the Israelis. He meets and is drawn to Suha (Lubna Azabal), an attractive young woman whose car he has repaired. She was born in Paris, raised in Morocco, and just recently come to Nablus. Her deceased father is regarded as a Palestinian martyr, but she herself abhors violence. It is through her debates with Said that the filmmakers disseminate their message of the futility of violence.

Unreeling like a thriller, the suspense mounts as the two friends cross over into Israel. One of them has last minute doubts and must make a decision as to whether to follow through on his mission or to choose life.

Some have regarded the film as pro-Palestinian propaganda, but I think they must not have seen it, especially the section in which Suha tries to reason with Said. While recognizing that the Palestinians do have legitimate grievances, Mr. Abu-Assad reminds us that our view of terrorist as soulless fanatics is very distorted. His characters are fully realized human beings, struggling with injustice and the ways in which they will resist it.

Once this and Munich come out on video, the two ought to be shown as a double feature, or, more probably because of the length of the Spielberg film, as a two-part series. Each film in its own way offers both thrilling entertainment and insight into the complications of Israeli-Palestinian relationships, and the decisions some must make in righting what they regard as injustices.

Reprinted from the Dec. 2005 VP. Note that this was nominated for an Oscar as Bst Foreign Language film and became the first Palestinian film to be distributed to theaters in the USA.