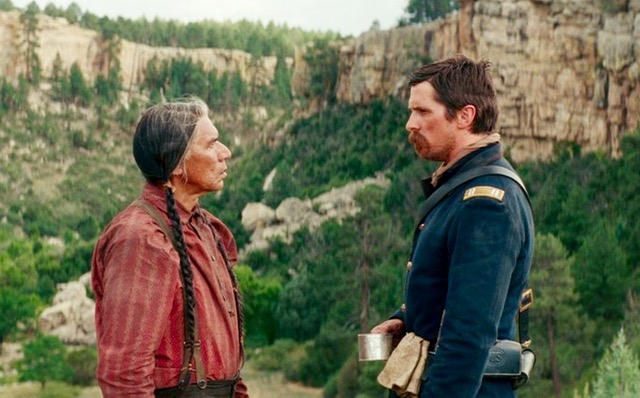 For he is our peace; in his flesh he has made both groups into one and has broken down the dividing wall, that is, the hostility between us.

I wish I could have seen director/writer Scott Cooper’s elegiac Western a week sooner, because it would have been on my Top Ten List for 2017. Set during the closing years of the frontier (1892), it is one of the most thought-provoking Westerns that I’ve seen since Clint Eastwood’s Unforgiven. Be warned that it is both violent and, in between battles, slow moving, the film makers being more concerned with character development than action.

The film opens with renegade Commanches slaughtering all the Quaids, a frontier family–except for the wife/mother who manages to run and hide while clutching to her breast her infant, who has been shot.

The film switches to nearby nearby Fort Berringer, New Mexico, where Colonel Abraham Biggs (Stephen Lang) gives veteran Indian fighter Captain Joseph Blocker (Christian Bale) the unwelcome news that he has been chosen for a mission set up by the President of the United States. He is to take charge of the fort’s most notorious prisoner, Cheyenne war chief Yellow Hawk (Wes Studi), who is dying from cancer and escort the Chief and his family to their ancestral lands, hundreds of miles away in the Valley of the Bears, in Montana.

Hating Native Americans so much that he has matched them slaughter for slaughter (including women and children the Captain says at one point), Blocker refuses. However, he is about to retire, and the Colonel holds the trump card. Continue to say No, and he will be court martialed, which will result in the loss of his pension.

One of the soldiers making up the escorting party is the African American Corp. Henry Woodsen (Jonathan Majors). Another is Master Sergeant Thomas Metz (Rory Cochrane), an old companion of many campaigns. The latter has seen so much killing that a deep “melancholia” has overtaken him. The prescribing doctor had recommended his guns to be taken from him.

To strip his captives of their dignity Blocker orders that the Indians be chained during the trip. Along with the chief and his wife, Elk Woman (Q’orianka Kilcher); his son, Black Hawk (Adam Beach) and his wife; and their two younger children. The film is essentially a 19th century road trip during which the Captain travels as far inwardly as he does geographically.

Not long after leaving the fort, the party comes upon the blackened ruins of the Quaid house, where the dead bodies lie on the ground and the traumatized Rosalie (Rosamund Pike) is still clutching her dead baby. The Captain and soldiers treat her tenderly, taking over from her the task of digging the graves when she gives up clawing at the hard ground with her fingers. The Native Americans also regard the slaughter with horror, the women later on approaching the almost comatose mother and offering her their clothing to replace her stained garments.

The second stop is due to the attack of the same Comanche band, which is repulsed, but with the loss of a soldier and the wounding of Woodsen. Rosalie takes up a pistol and, striding over to the body of a slain Commanche, fires into it until all the bullets are gone.

The party stops at another army post where the commander’s wife, unaware of Rosalie’s experience, complains of the unjust treatment of Native Americans by settlers, the Army, and the corrupt Bureau of Indian Affairs. Her husband, knowing of the Captain’s views, hushes her. He turns over an imprisoned soldier Philip Wills  (Ben Foster) for the party to deliver another town where the man is to be hanged because of his indiscriminate killing of Native Americans. (Later this man, who had served under Blocker, will observe that the Captain today would also have been convicted and sentenced to die. Times have changed!)

The Captain had intended to leave Rosalie at the fort, but circumstances make it necessary for her to continue on with his party. There is still more violence when fur trappers kidnap and rape the women. By now Blocker has taken the chains from his prisoners because they had helped fend off the Comanches, so the braves join the soldiers in winning back the captive women. Up in Montana there will be still more violence due to the bigotry of a white cattleman and his sons.

Although Capt. Blocker says, “I’ve killed everything that’s walked or crawled,” he is not depicted as an ignorant brute. He is a reader of books, his apparently favorite being Caesar’s Gallic Wars that he reads in the Latin by firelight when they make camp. He also, like the recovering Rosalie, is given to reflection. At one point when they sit together on the prairie, she speaks about the need to drive away thoughts of the finality of death. “You believe in the Lord, Joseph?” she asks, to which he replies, ‘Yes, I do, but I think he’s been blind to what’s going on out here.” She can only respond that she has faith. “If I did not have faith, what would I have?”

Throughout the film the Native Americans are given few lines. Instead of the spare lines in which Chief Yellow Hawk expresses his enmity for the Cheyenne and the need for the whites and his family to fight together against their attackers, it is through the acts of compassion toward Rosalie that we see that he and his family have moved beyond their past hatred of whites. The moment during the night when the guilt-ridden Sergeant Thomas Metz comes to the Chief seeking his forgiveness for past atrocities is a moving one, our gladness at his act of reconciliation being quickly overcome by the sorrow that follows soon after. Near the end, the exchange of respectful words between the Captain and the Chief also is deeply moving.

Aside from the brutal violence, my chief criticism of the film is that the story is told almost entirely from the White perspective, the Native American actors given very few lines. Fortunately, veteran actors Wes Studi and Adam Beach are able to convey their suffering and dignity through their expressions as well as their brief lines. By the end of the story we understand and accept the truth in the tag line seen in the film’s trailer, “We are all hostiles.” And so we still are, the film being as relevant to 2018 as to 1892. That mutual hostility is well captured in the brief shot near the beginning of the film when Blocker enters the prison cell to stare at Chief Yellow Hawk. We see the Chief in profile, defiantly looking ahead rather than at his visitor, and through the bars, the Captain, the bars thus embodying “the dividing wall, that is, the hostility between us”  that the apostle Paul wrote about.  The film makers offer a ray of hope, both in the mended relationship between the two warriors, and again in the decision that the Captain makes at the end of the film. The future of the Chief’s young grandson will no doubt be fraught with difficulty, but that, as they say, “is another story.”

A veteran Indian fighter, made against his will to escort a chief & family from NM to MT, encounters dangers along the trail.
Editor Rating ★★★★★4.5 out of 5
More Details