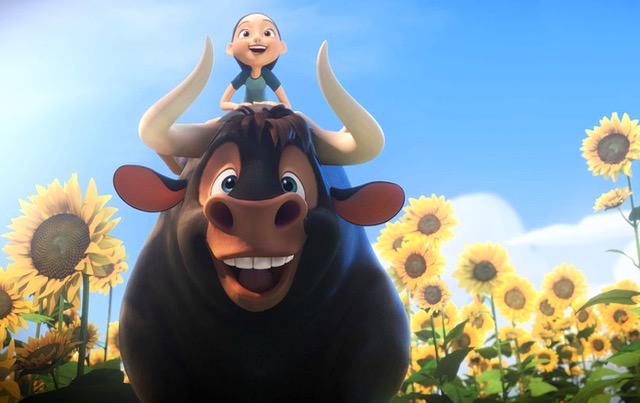 The wolf shall live with the lamb, the leopard shall lie down with the kid, the calf and the lion and the fatling together, and a little child shall lead them.

And goodness is the harvest that is produced from the seeds the peacemakers plant in peace.

It is a long way, both in length of time and length of film, from the 1938 Disney film Ferdinand the Bull and Twentieth Century Fox’s Ferdinand, both of them adaptations of Munro Leaf’s controversial 1936 children’s book The Story of Ferdinand. The Oscar-winning Disney film was just 8 minutes long, but the new version, directed by the Brazilian Carlos Sandanha, clocks in at 1 hour and 48 minutes! This huge difference led me to fear that this would be another example of bloating, as in the awful version of How the Grinch Stole Christmas, a rare misfire by director Ron Howard.

There is a great deal of new material introduced by the 6-man writing team, but this does not spoil the original source, as was the case with the Grinch film. Ferdinand as a young calf on the Spanish ranch of Casa del Toro loves to smell flowers and thus is ridiculed by the other calves. When his father does not return from the bull fight for which he was picked, the little bull calf runs away, eventually winding up on a floral farm where the owner and his young daughter Nina adopt him, the girl and calf developing a strong bond between them.

Jump ahead several years and Ferdinand has grown up to be a big fierce-looking bull, but still preferring to smell flowers to fighting. He has a favorite spot atop a hill where he can sit in the shade of a tree and survey the lovely countryside. On the day of the annual festival of flowers, Nina and her father leave Ferdinand behind because of his huge size. Of course, he decides to follow them, and it is in the village that the bee sting from the original story is included. Added to the story, much to the delight of us viewers, is the proverbial “bull in a china shop” sequence, a beautifully choreographed series of shots which will make you draw in your breath and laugh during Ferdinand’s desperate attempts to avoid disaster.

Now regarded as a truly fierce bull, Ferdinand is sent, to Nina’s distress, back to Casa del Toro where the other bulls who had ostracized him earlier continue to ridicule him. However, he is befriended by a crazy goat who tries to coach him in the ways of bullfighting, and by a trio of hedgehogs who come around to steal food from the ranch. I will leave it to you to find out how Ferdinand discovers the irony of the bulls seeking to be chosen to fight in the ring rather than to wind up at the slaughterhouse—he is alarmed to learn that the matador kills the bull at the end of their face-off. There is a thrilling escape from the slaughterhouse and then a climactic scene in which Ferdinand finds himself facing Spain’s greatest matador, a vain man who wants to retire from the ring after this triumph. Billed as a spectacular contest, as written by the adapters, it stays true to the original story, suggesting that the usual win/lose formula can be replaced if one’s will is strong enough, with a win/win solution. As with other animated films, the filmmakers teach something close to what the Scriptures proclaim, enhanced by glorious color animation and expressive voice talent.

When Monro Leaf wrote his little story (in less than an hour, we are told) so that his friend, budding artist Robert Lawson would have a subject to illustrate, the Spanish Civil War was looming on the horizon. Upon the book’s appearance 9 months before fighting broke out, supporters of the fascist General Franco soon dubbed it pacifist propaganda sponsored by Communists. The author and artist must have been surprised by the controversy over what they saw was just a story of non-conformism. The Cleveland Plain Dealer accused the book of “corrupting the youth of America,” but it became a best seller, one year even passing Gone With the Wind in sales. Translated into 60 languages, the little book was banned in Spain, burnt in Hitler’s Germany, and praised everywhere else, even in India by Gandhi. Certainly the staunch anti-Communist Walt Disney saw no leftist political message in it when he green-lighted his short animated adaptation.

As a visual parable, the film should appeal to young and older viewers. It captures well the ancient Isaiahan vision of God’s creatures overcoming their violent tendencies so they can live together in harmony—and Nina is a good stand-in for the child leading them. Those who love the now classic adaptation of Ted Hughes’s The Iron Giant will be happy to have another peacemaking film that says, “though you may be built for violence, you do not have to give in to it—there can be a more positive way of dealing with conflict.”

The addition of material to the original short story increases the impact of Ferdinand the Bull's refusal to fight in the ring.
Editor Rating ★★★★★4.5 out of 5
More Details