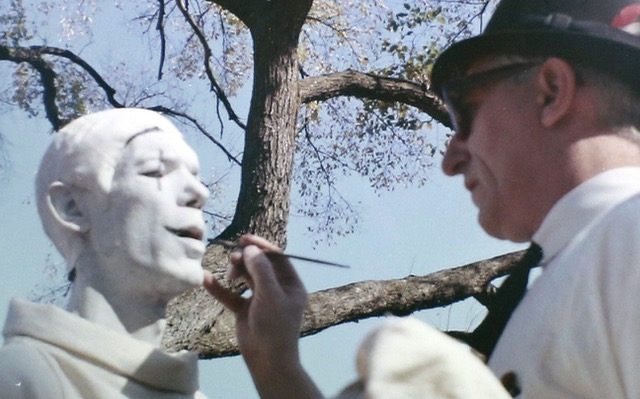 Surely he has borne our infirmities
and carried our diseases;
yet we accounted him stricken,
struck down by God, and afflicted.
But he was wounded for our transgressions,
crushed for our iniquities;
upon him was the punishment that made us whole,
and by his bruises we are healed.

But ye have not so learned Christ; if so be that ye have heard him, and have been taught by him, as the truth is in Jesus: that ye put off concerning the former conversation the old man, which is corrupt according to the deceitful lusts;  and be renewed in the spirit of your mind; and that ye put on the new man, which after God is created in righteousness and true holiness. 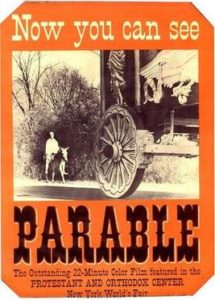 Parable is Rolf Forsberg’s nonverbal film about Christ that was almost too far ahead of its time—1964—so different that it stirred up almost as much controversy as the 1988 release of The Last Temptation of Christ. Commissioned by the New York City Protestant Council of Churches for their New York World’s Fair pavilion in 1964, Forsberg knew that the usual, formulaic short films used by churches would never attract a crowd. While at a consultative retreat in Wisconsin he came across the Baraboo World Circus Museum and was inspired to set his story in a traveling circus that represented the world and featured a white-faced mime drawing both disciples and enemies from among the circus denizens.

The film starts out in darkness, and a narrator speaks the only words we will hear, explaining that Christ taught in parables, and that a parable today might be like a circus in which a man dared to be different…As the front titles come on we see it is dawn. The camera moves in on a circus wagon and then inside, revealing a man stirring in bed. On the walls are posters with large photos of his face, announcing that he is Magnus the Great. Cut to the outside where, to the accompaniment of ponderous music, the horse-drawn circus wagons parade down a country road. Many of the towering wagons represent the nations of the earth, France, Great Britain, America, their elaborately carved sides painted in bright colors. Marching along are two elephants and a baby. Some Native Americans wearing ceremonial war bonnets ride by, and a South American one on foot leads a llama. A woman plays a small pipe organ; a Roman charioteer proudly holds the reins of his horses. Then as the last large wagon rolls by we see the white mime astride a humble donkey.

The first episode of helping involves an elephant caretaker, bored with his task of fetching water for the elephants; the second a black man sitting on a seat suspended over a large tub of water while, separated by an iron latticed fence, a scowling white man gathers up and throws baseballs at a round target, the purpose obviously to hit it and plunge the black man into the water. The third episode is at a side show where a barker, accompanied by staccato music imitating his spiel, implores the pretend crowd to buy one of his tickets to the attraction featuring a sinister-looking man piercing a large box with a sword, Inside the container hunkers a scantily clad Indian woman. The camera cuts to the mime, wincing at the possibility of the woman’s endangerment.

Each of the above incidents involves the mime taking the place of the oppressed person. The coming of the Mime is announced by a piercing brass theme, the tempo becoming spritely as the Mime goes about his mission of helping. The freed persons follow in his wake. But so do the exploiters.

Magnus emerges from his home wagon, fully attired in his militaristic-style costume, heading toward the big top. On the side of his wagon is a picture poster of “Magnus and His Living Marionettes.” While Magnus makes his way to the arena, three performers are in a dressing room donning their make-up and costumes as the Living Marionettes. There is no smiling or sense of joy, either as they prepare nor in their performance high above the heads of the on-lookers.

The audience consists of children, all dressed in multicolored hooded sweatshirts. Magnus manipulates the three marionettes who are held aloft by their harnesses. As he pulls on various strings, the three gyrate in grotesque, jerky motions. The Mime enters the large tent, gazes up at the marionettes, and then takes a whiskbroom and starts to sweep the feet of the children. They giggle as he moves about cleaning their feet, and soon the three people whom he has set free follow, also taking up small brooms. The children also join in, now totally distracted from Magnus’s act.

Magnus is upset that he has lost his audience. The music grows more frantic and then ominous as he jerks about his marionettes in a vain effort to recapture the attention of the giggling children. What follows is one of the most memorable “crucifixion” scenes ever filmed, the loud, agonized cry of the tortured mime piercing earth and sky, perfectly expressing Mark 15:34. Then a quiet Easter sequence that the groups with whom I’ve worked, sometimes a bit puzzled, always enjoy discussing.

When I first rented the film around 1966 or 67 in North Dakota, I was so taken with it that I convinced 9 other church pastors to pool $30 each (the cost of one-time rental) so we could buy a 16mm print and share it—for youth groups, men’s and women’s fellowships, church school, and especially for confirmation classes. I did this also in West Virginia and Pennsylvania, the film proving such a valuable resource for exploring the role of Christ.

I didn’t know then that the powerful New York City-based politico Robert Moses had tried to ban the film from the World’s Fair when he first heard about it. Fortunately, the New York City Council of Churches had the courage to resist, even when Billy Graham denounced the film (without having seen it). The film proved so successful in drawing enthusiastic crowds that the media picked up on it, touting its virtues so much that it became possibly the most watched short film in thousands of churches during the 70s and 80s, eventually distributed on VHS tape, making it both cheaper and easier to show. When DVDs pushed out VHS tapes, there was a period when it was unavailable, and then EcuFilm came to the rescue with their DVD release, much to the relief of the film’s fans.

As the years passed, Parable, slowly faded from public consciousness as a new generation of pastors and educators arose. EcuFilm, the only source that I knew for the film, almost folded, and thus was not able to promote its small catalogue of films. (Indeed, it did close in 2011.) Thus, when film producer Bob Campbell called me recently to tell me about the various projects he has been involved in under the umbrella of Gospel Films Archives, I was delighted to learn of the film’s new lease on life. And as a fantastic bonus, three other Forsberg films are included, one of which I had seen and used—The Antkeeper; and in addition, Ark; and One Friday. (I will be reporting on these memorable films in future issues.)

Mr. Campbell reports that during the last few years of filmmaker Rolf Forsberg’s life his group worked with him to produce short introductions to each of the four films on this DVD, making the disk even more valuable. I loved watching the filmmaker discuss how and why he made Parable, one tidbit being that through a mask system Forsberg’s original was a widescreen film, and not the standard 16mm screen size (3by4) seen by all of us who used the 16mm version. Now the images fill your computer or phone screen.

I cannot recommend this film enough. See for yourself why the film was added to the National Film Registry by the Library of Congress.

Do you subscribe to Amazon Prime? The film is free for you to stream, along with other Fosberg films.

This review with a set of discussion questions will be in the March 2018 issue of Visual Parables.

A humble mime traveling with a circus helps its exploited members by taking their place & meets strong opposition leading to a cross & then an Easter experience.
Editor Rating ★★★★★5 out of 5
More Details