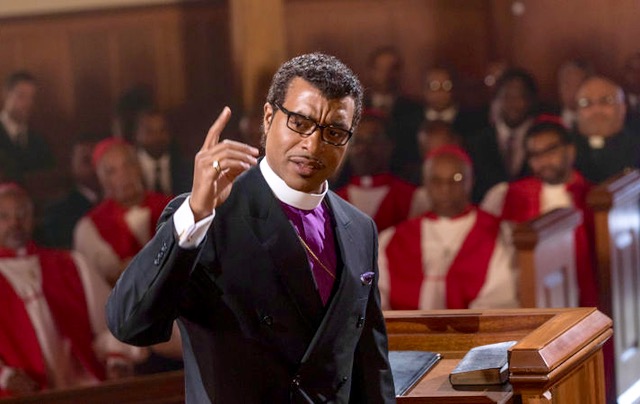 But what does it say?

“The word is near you,
on your lips and in your heart”

(that is, the word of faith that we proclaim); because if you confess with your lips that Jesus is Lord and believe in your heart that God raised him from the dead, you will be saved. For one believes with the heart and so is justified, and one confesses with the mouth and so is saved.

My little children, I am writing these things to you so that you may not sin. But if anyone does sin, we have an advocate with the Father, Jesus Christ the righteous; and he is the atoning sacrifice for our sins, and not for ours only but also for the sins of the whole world.

Can a preacher credit God with having too much love? Director Joshua Marsto’s adaptation of a 2005 episode of NPR’s “This American Life” about Carlton Pearson (Chiwetel Ejiofor), a famous Church of God in Christ bishop, raises this and other perplexing theological questions that go to the heart of the Christian gospel. The struggle with these by him and the people in his church, and his subsequent fall in popularity, make for compelling drama. Mr. Ejiofor, one of the busiest actors in Hollywood these days, turns in an Oscar-worthy performance as the conflicted pastor (or, in Church of God in Christ parlance,” bishop”) in this Netflix drama.

By the early 1990s in Tulsa Carlton was at the height of his career as pastor of the city’s largest charismatic congregation, Higher Dimensions. A major reason for the attention it drew, aside from the size of his Sunday audience—6000 in church and hundreds of thousands in the TV audience– was that it was racially integrated. Several of the associate pastors were white, including his co-founder and manager Henry (Jason Segel). Black members of his staff included chief musician Reggie (Lakeith Stanfield), and senior staffer Nicky (Stacey Sargeant). A graduate of Oral Roberts University, Carlton was a favorite of founder Oral Roberts (Martin Sheen), who refers to him as “my black son.” His television broadcasts enhanced his fame, so he traveled frequently to speak around the country. His Azusa Street conferences drew thousands to the city to hear famous speakers.

Then Carlton hears a voice calling him to re-examine his belief that those who do not consciously accept Jesus as their savior will go to hell. He and his young daughter had been watching an account of the genocide unfolding in Rwanda, during which the question of the destiny of the millions killed arose—not having heard the gospel preached, would they be damned to hell by God? Thus, he re-examines the Scripture passages, such as the Romans passage that seem to teach “Yes.”

Looking at 1 John 2:1-2 from a fresh perspective, he interprets “the whole world,” which the writer had seen as separate from believers, to mean that Christ had saved everyone by dying on the cross, which means there is no hell. As we see, this does not go over well with many of his people when he preaches this the next Sunday.  His question “Are we more merciful than God?” is not really dealt with amidst the shouting and arguing that follows, and the last straw for many teetering on the brink of leaving is his declaration, “The God that we worship, from the parts of the Bible that we focus on, that God is a monster … worse than Hitler.”

Henry and the other pastors confront him in his home, declaring that they must leave and start their own congregation. He pleads with them, but to no avail. Along with the huge drop in attendance is the withdrawal of speaking invitations and his removal from the board of Oral Roberts University. His old mentor professes his love for him, again referring to him as “my black son,” but he must oppose him publicly because his position puts the souls of believers in peril. This private meeting with his mentor is one of the most moving scenes in the film, Roberts revealing his agony over the suicide of his oldest son. He tells Carton he still loves the son but must affirm that he is in hell nonetheless. (Although I have never been an admirer of the televangelist, this scene awakened in me a kinder feeling toward the tormented man.)

Carlton’s wife Gina (Condola Rashad) stands by him, but not most of his members, nor, in a powerful confrontation, the council of bishops that rule his denomination. Cast out, the low point of his spiritual journey is his witnessing the auctioning of his congregation’s church building and its furnishings.

The upward arc takes in the theme of Carlton’s recognizing the legitimacy of the faith of gay people, with him meeting with his former music director Reggie, to whom he could not minister when earlier the musician had revealed that he was a closeted homosexual. Carlton assures Reggie, now afflicted with AIDS, that he too is included in God’s love, and at the end of the film we see the bishop joining in a worship celebration at a church that accepts gay members.

The film can lead to a good discussion in which participants are challenged to examine their own beliefs about God, salvation, heaven and hell. I have always felt challenged by Frederick Faber’s great hymn, the first stanza being, “There’s a wideness in God’s mercy/like the wideness of the sea;/there’s a kindness in God’s justice, /which is more than liberty.” Check out your hymn, and you’ll see that the other verses could easily lead one to adopt a universalist view of God and salvation, though Faber, as an Anglican convert to the Roman Catholic Church, never did.

Many questioned Carlton’s trust in what he believed was the voice of God, including Oral Roberts. The bishop’s defense of the voice he heard, as well as his opponents’ suggestion that the voice might have been Satan’s, reminds me of scenes from the various Joan of Arc films, especially Carl Theodor Dreyer’s 1928 masterpiece, The Passion of Joan of Arc. She was badgered by her captors to renounce her voices as emanating not from the saints or God, but from Satan. Like the French saint, Carlton refuses to renounce his one-time experience, especially when he re-examines the Bible and finds support there for his position. His life and struggle are part of Christianity’s long history stretching back to the ancient church and such theologians as Origen. It will be interesting how this Netflix film contributes to the never-ending debate. For some the film will be welcomed as a tract for tolerance during a time of great intolerance, but for others it will be considered an assault on accepted Christian teaching that will weaken the faith. This is clearly a film that goes way beyond the boundary entertainment.

This review with a set of questions will be in the April 2018 issue of Visual Parables.

You can hear the episode of  This American Life that the movie is based on ay https://www.thisamericanlife.org/304/heretics. There is even a link to the transcription.

When a popular preacher teaches that God does not damn sinners to Hell, most people turn against him.
Editor Rating ★★★★★4.5 out of 5
More Details