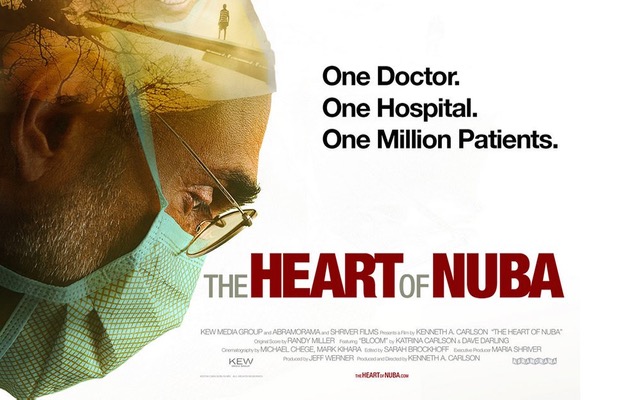 As he went ashore, he saw a great crowd; and he had compassion for them, because they were like sheep without a shepherd; and he began to teach them many things.

In this inspiring documentary—one of the most Spirit-filled that I have seen since The Power of Forgiveness—Dr. Tom Catlin is a great stand-in as shepherd of a needy flock. His endangered flock is the people living in the remote Nuba Mountains of Sudan constantly under air attack by the brutal forces of President Omar Al-Bashir. The film begins with children frantically seeking shelter in covered holes in the ground as war planes fly overhead.

Since 2008 Dr. Tom, as he is called, has been the chief doctor of Our Mother of Mercy Hospital. His task of providing the only medical relief for almost a million people would be great enough, given the meager supplies and paucity of trained staff, but with the bombing of so many villages (and of the hospital itself) by government forces, the task of tending to the ill and injured is all the more daunting. The film is obviously a heart-felt project, director Kenneth A. Carlson revealing in his statement on the film’s website that he and Dr. Tom were teammates on Brown University’s football team.

The film maker spent six weeks during two trips to the remote area to give us a visual chronicle of the days and nights of the seemingly inexhaustible doctor, his brave staff, and his patients. From shots of him praying the rosary at the dawn of the day to his words of anguish over the senseless suffering of the people, we see that his dedicated service is tied to his faith. He calls his morning devotion “the best half hour of the day.” At one point he reflects on the gospel story of the rich man and Jesus as being “a very powerful message.”

As the only surgeon within 200 miles, he is constantly on duty, making the rounds of the 500-bed hospital and interacting, often jokingly, with the patients and staff. We see him visit the nearby leprosy clinic where he touches the patients, observing that this is an important part of their treatment. The disease is passed through contact, he says, but careful washing afterwards removes the danger of catching it.

“I like the idea of being in one place and being a part of the people…There is hope in this place and in these lives,” the doctor observes. He had spent 8 years in Kenya, where he had learned surgery on the job. In one sequence we see him removing the diseased kidney of a child, a desperate last-resort operation to save the child—and later in the film, he talks to the recovered child and her mother. When he becomes seriously sick himself and is forced to return to his large family back in America, we see what he has given up to serve in Africa. The Amsterdam, NY sequence is a Norman Rockwell occurrence, a happy family reunion in which he and his parents, brothers and relatives—one a priest—gather around a long table. He speaks of his conflicting desires—to be with his parents during their reclining years and with his beloved Nuba people who need him so much.

The film maker has said of the doctor that he is “as close to a saint as anyone I would ever hope to meet,” though obviously the doctor does not feel this way. He says that his goal is to work himself out of the job, amply illustrated by the many Nuban nurses and doctors he is training. Several of the hospital staff members testify to this, as does the area Catholic bishop. A detail tucked late into the film is the romantic relationship that apparently has developed before the arrival of Carlson ‘s cameras between Dr. Tom and Nasima, an African studying to be a nurse in a distant institution. They keep in touch via Skype. He says that marriage might be in his future, something his parents had wished for during the sequence back in the USA. I will leave it to you to discover how this turns out.

The scenes veer from shots of him moving quickly among the hospital patients to ones of joking and celebrating to several of terror as the children and adults scramble into the many fox holes dug in the ground around the hospital. One in particular is stark, some of the children and adults screaming in terror as planes bomb the facility, their trembling continuing long after the planes have flown away. Sometimes the source of destruction is a single multi-engine bomber high in the sky. Another time it is single engine jets flying in close to the ground.

This is a great film for religious groups to screen and discuss. We see that though a person might serve in an isolated region, goodness sometimes is sought out and rewarded. Dr. Tom Catena was among Time Magazine’s 100 Most Influential People, as well as the recipient of the 2017 Aurora Prize for Awakening Humanity. Judging by what we see of the African staff he is training, he will achieve his goal of working himself out of his job, but in the meantime, he serves as the faithful shepherd, like his Lord, ready to lay down his life for the sheep if necessary.

For more information on this important film and hospital, go to HeartofNuba.com. For lots of information on what has been called “the forgotten war” go to the site maintained by a network of journalists in the area NubaReports.com.

An American doctor works with an African staff to save victims of civil war in the Sudan's Nuba Mountains.
Editor Rating ★★★★★5 out of 5
More Details