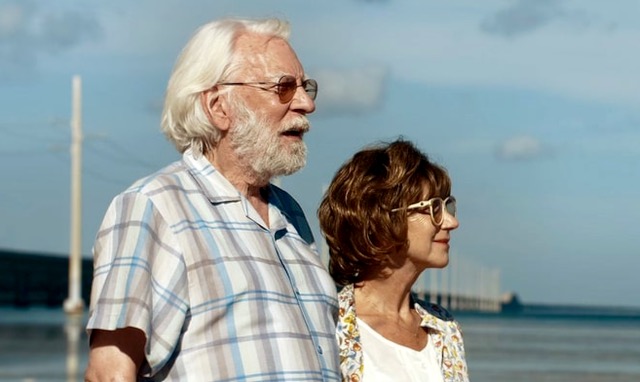 Enjoy life with the wife whom you love, all the days of your vain life that are given you under the sun,

because that is your portion in life and in your toil at which you toil under the sun.

Fans of Helen Mirren will be delighted by Italian director Paolo Virzì’s first English language film—she sports a Southern accent this time. Based on Michael Zadoorian’s novel about an elderly Detroit couple, the movie makers move the story to Wellesley, MA, where Ella (Helen Mirren) and John (Donald Sutherland) have been married for some 50 years. She is taking medicine for the intense pain she has been afflicted with, and he, a victim of Alzheimer’s, flits back and forth between forgetfulness and normalcy—the latter includes his being able to recite long passages from Ernest Hemingway, he having been a college professor of literature

Their grown-up daughter (Janel Moloney) and son (Christian McKay) are overly protective, so the parents impulsively decide to escape their close supervision for a while by piling into their mid-70s Winnebago camper for one last adventure together. The RV’s name provides the title for the film. Their destination is the Hemingway House in Key West, Florida, a place that John has always wanted to visit but had never gotten around to it.

Of course, this will be a road trip fraught with many obstacles and bizarre occurrences. A flat tire leads to a near robbery that is thwarted only when Elsa grabs their shotgun from the RV. Later she holds onto the back of a motorcyclist who chases down the RV when the forgetful John leaves a gas station without her. Least believable is the incident in which the jealous John enters a retirement home with that shotgun hidden in his pants leg to confront Elsa’s past boyfriend, who turns out to be… Most poignant is John, forgetting the identity of his life-long companion, thinks she is their next-door neighbor with whom he had some kind of an affair several years ago—he tells her that Elsa is the “love of my life” and that they must end their relationship. Elsa is so enraged by this that she ignores his declaration of love and drops him off at a nearby nursing home, despite the objections of the mystified staff.

The film is a mixed-bag of an affair, though the many little touches in which the couple show their affection, save it. The film’s descent into the darkness in the last half, after John asks Elsa to help him shoot himself with the shotgun at some point in the future when it becomes apparent that his disease has obliterated his personality.  This plea provides an opportunity to reflect upon and discuss the plight of so many who are now living far longer than our ancestors. This scene makes us aware of why John might have been so fascinated with Hemingway, whose final act he seeks to emulate. No matter how you feel about Elsa’s act of love, this film, which could have become another one of those cutesy geriatric tales, is one you will remember for a long time.

An afflicted elderly couple set out in their RV on a last trip to celebrate their love & escape their overly protective son & daughter.
Editor Rating ★★★★★4 out of 5
More Details