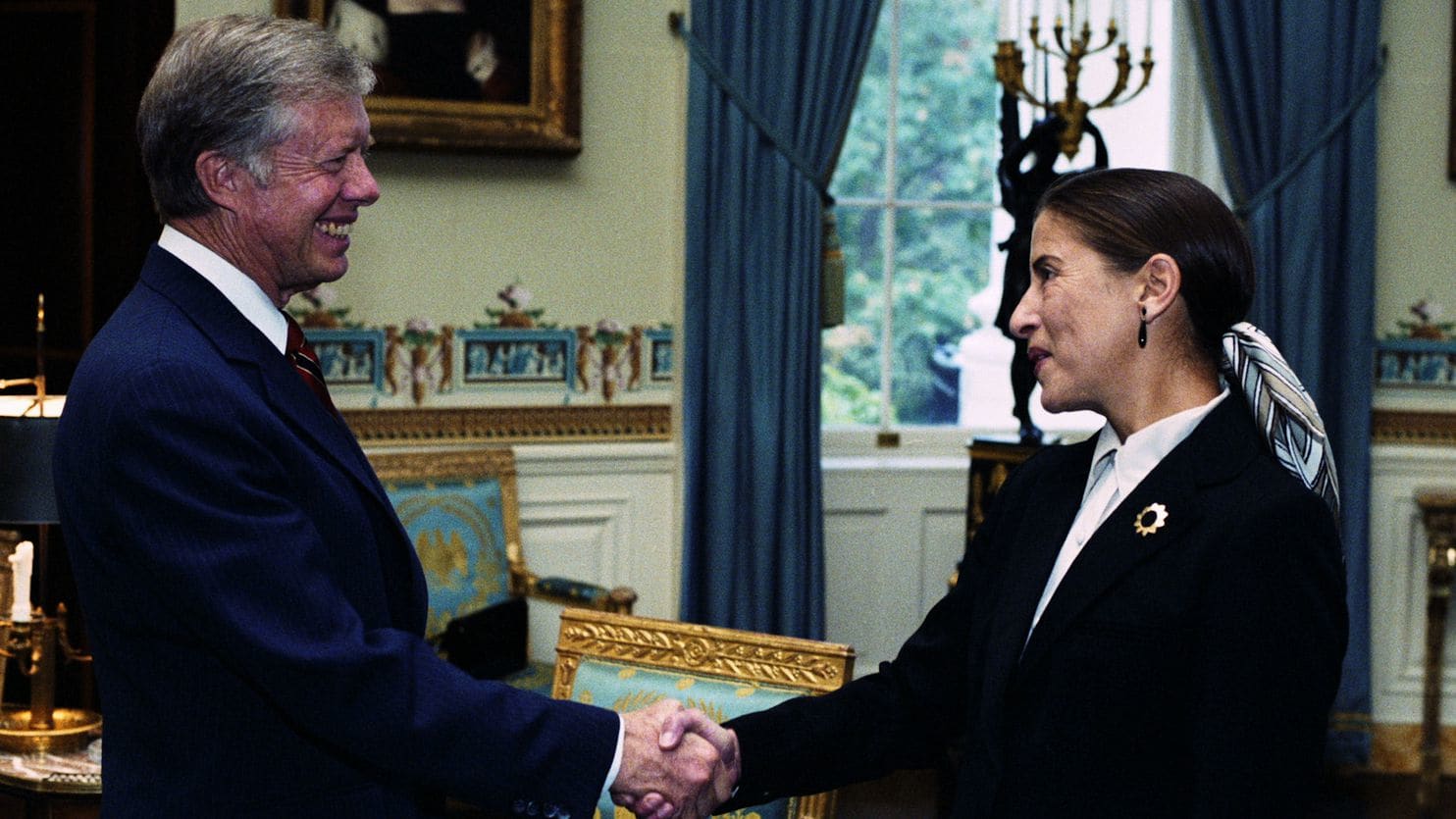 Justice, and only justice, you shall pursue,

so that you may live and occupy the land that the Lord your God is giving you.

Give justice to the weak and the orphan;

maintain the right of the lowly and the destitute.

Co-directors Julie Cohen and  Betsy West not only document Supreme Court Justice Ruth Bader Ginsburg’s great contributions to American law, but also present what could be called “one of the great love stories of the 20th century.” Ruth Bader Ginsburg’s passions were the law, music, and the first man who loved and respected her for her brains, Martin Ginsberg. We see these three passions throughout the film, thanks to the skillful interweaving of interviews, archival footage and photographs. Included are Ginsburg’s children, life-long friends, colleagues, admirers and such famous folk as Gloria Steinem and former President Bill Clinton.

The film begins with shots of Washington DC accompanied by the voices of her detractors, aptly followed by her saying that she “asks no favors for my sex—I just ask that they take their feet off our necks.” To show her determined struggle against sexism we see the first of many sequences of the 85-year-old working out in a gym. One of her friends marvels that she still can do push-ups.

The historical bias against women is depicted in shots of feminist demonstrators and comments by Gloria Steinem. Ruth was not out front with the demonstrators but used her legal skills to knock down barriers. She argued six gender discrimination cases before the Supreme Court, winning five of them. To some she became the Thurgood Marshall (a jurist she admired) of the feminist movement.

No doubt her championing gender equality was fueled by her own experience. She enrolled in Harvard Law Scholl where she was one of nine women in a class of five hundred. The dean demanded of the women why they should take the place of a man. Moving to NYC when her husband secured a job there, she transferred to and graduated from Columbia Law School (tying for first place in her class). Top of her class, yet no firm would hire her.

Her favorite Columbia professor secured a clerkship for her with Judge Edmund L. Palmieri of the U.S. District Court for the Southern District of New York only by threatening never to recommend another student if he did not hire her. She served for two years and then went on to her history making career as a lawyer and professor of law (at less pay than her male colleagues!) advocating the equality of women. During this period, she worked with the American Civil Liberties Union to bring cases before the Supreme Court and also serves on its board.

It was Jimmy Carter who noted disapprovingly that most judges looked like him, and so appointed her to the United States Court of Appeals for the District of Columbia Circuit in 1980. In 1993 when Pres. Bill Clinton was to fill a Supreme Court vacancy, she was not among his top considerations. Her husband Marty, deeply respecting her abilities, became one of her main advocates, pushing for an interview. Clinton reports that soon into their interview he was convinced by her brilliance that she would be his nominee. She is overwhelmingly voted onto the Court (96 to 3) by a Congress that at the time was willing to operate in a bi-partisan manner. The film goes on to show how she has been influential in such cases as The United States Vs. Virginia in which Virginia Military Institutes’ ban on the admission of female students was struck down.

A lover of opera, Ginsburg says, “The sound of the human voice is like an electrical current going through me.” Her passion for opera was part of her bi-partisan friendship with Judge Scalia, also an opera lover. Although always voting on opposite sides of many cases, the two respected each other and enjoyed sharing music. In one delightful sequence the two, dressed up in costumes, participate in an opera that had a brief scene with speaking parts. They appear to be having a delightful time. Many of her admirers took issue with her befriending such a conservative, but she insisted that a person could reach across divides when they shared a greater interest—and she loved the way Scalia could make her laugh.

Throughout the film she speaks of “Marty,” and we see him standing close by her in many photos and clips. He was the extrovert and she the reclusive workaholic. He was a tax lawyer willing to put his career second to hers, especially when it appeared that his wife might be considered to fill the vacancy on the Supreme Court. Some thought that at 60 she was too old for consideration, presidents usually favoring a candidate young enough to serve 30 years or more. Marty got busy using his connections so that President Clinton would be made aware of her vast accomplishments. As the former President says, it was but a short time into their conversation that he knew he had his nominee. Marty’s death in 2010 brought an end to a loving relationship that began when both were students at Cornell University in the early 1950s.

At 85 she is the oldest member of the Supreme Court at a time when it and the country and the Court are becoming increasingly conservative. To those liberal admirers who anxiously ask about her retiring, she replies that she hopes to last until another (Democratic) president can replace her. She utters a harsh criticism of candidate Donald trump, and then, made aware of its inappropriateness by critics, has to walk it back.

At one point she states, “The law is something I think I deal with well. … I don’t have the kind of talent to be an opera singer.” Some, who regard her with almost as much enthusiasm as fans bestow upon rock stars, will say “Amen” to that—though obviously not those whose voices we heard at the beginning of the film.