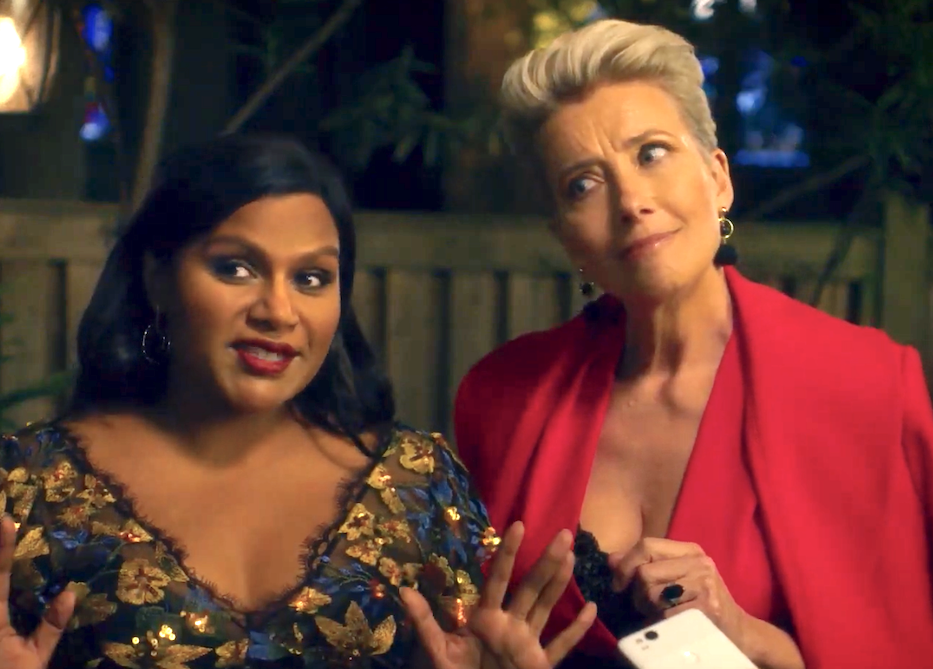 Go to the ant, you lazybones;  consider its ways, and be wise.

In Mindy Kaling’s witty script late, directed by another woman Nisha Ganatra, Katherine Newbury (Emma Thompson) could well be the sluggard that Proverbs directs to mend her ways by looking to the ever-busy ant. Nearly three decades ago she was a pioneer in television, the first woman to host a late-night show, but for the past decade she has been coasting. None of the clever skits of a Johnny Carson for her, she preferring to remain behind her desk after her monologue. She meets with her all male staff of writers so seldom, that she does not know their names. In one funny scene she assigns a number to each of them rather than trying to learn them.

Accused of being a “woman hater,” she tells her producer Brad (Denis O’Hare) to hire a woman. Enter scriptwriter Mindy who plays Molly, a worker at a chemical plant who has decided she want to enter the world of comedy. By means of a contest she secures an interview, and more because of timing than anything else, she is hired. The other writers regard her as diversity hire, granting her no respect.

The comedy is more realistic than most in that Molly dos not immediately turn the show’s ratings around. It will take something more than a fresh female hire. The host herself must change; the film makes clear. The motivation for change comes when the new network president Carolyn Morton (Amy Ryan) makes it clear to Katherine that she intends to replace her in the near future. To Katherine’s disgust the replacement her boss has in mind is a crude, gross out comedian named Daniel Tennant (Ike Barinholtz).

When an interview with a YouTube sensation blows up, Katherine takes the precariousness of her situation more seriously. There are several scenes between her and Molly where the two play off each other to great effect. Probably the most enjoyable of these is at a comedy club at which Molly is booked and she brings on Katherine.

Mindy Kaling suggests that women can make it in a male dominant profession. Because it focuses upon Katherine and Molly, there is no time to relate how Amy Ryan’s Carolyn Morton managed to rise to the top of a major TV network, but hers too is probably an interesting story. Also, romance is not the answer for Molly, the plot far more focused on her career as she tries to get her boss to reconnect with the creativity that once made her so great.

There is a passel of talented actors that make up the writing staff– Hugh D’Arcy,  Max Casella, Reid Scott, John Early, and Paul Walter Hauser—but only two of them have enough lines to make them stand out.

Mindy the writer gives Emma Thompson the juiciest of the film’s roles. We even see her private life with her long-time husband Walter (John Lithgow), who is in the early stage of Parkinson’s disease. What a joy to see this excellent English actor rise to the occasion. Though a smaller role, Mindy presents her character as a caring person, and not just as an ambitious one. Another writer might have depicted Molly as an Eve Harrington out to displace Margo Channing, as in the classic 1950 film All About Eve.

What a fun evening at the movies—do not miss this one that reminds us of the benefit of diversity.

When Molly goes to work writing for Katherine's ratings failing late show, she is up against a staff of all male writers & her hostile boss.
Editor Rating ★★★★★4 out of 5