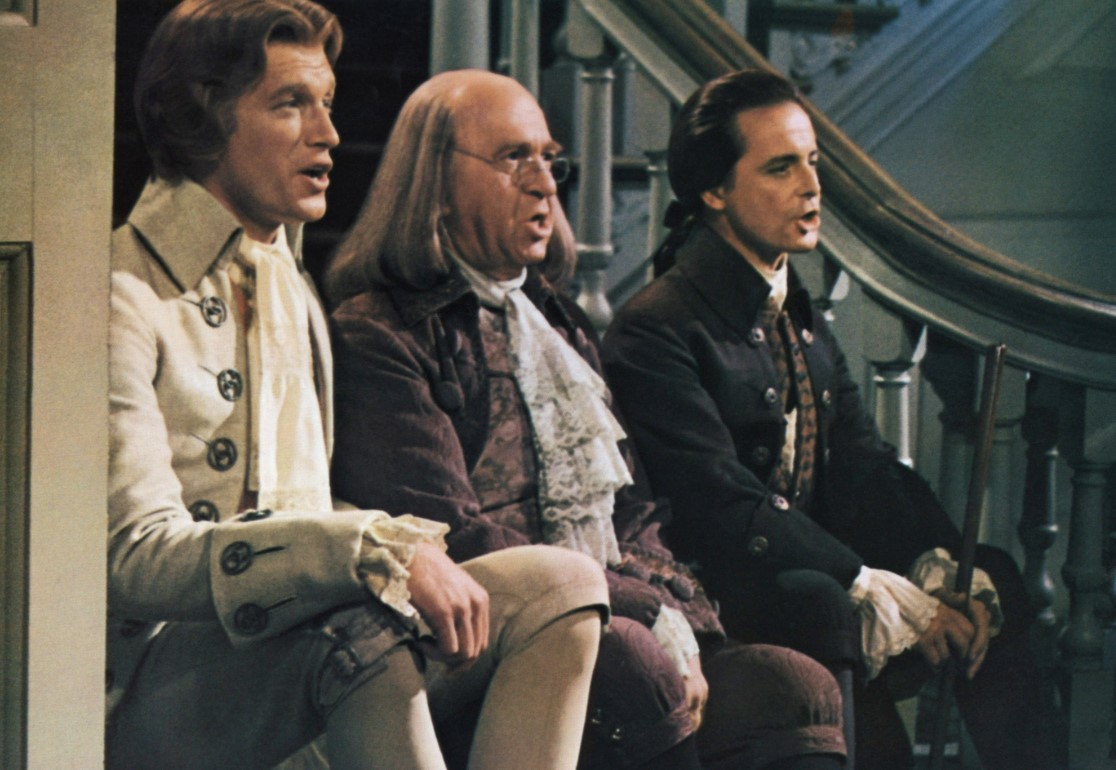 With the 4th of July now unfolding I wanted to bring up my review of a film I watch almost every time during this holiday. I was surprised to learn that I have never reviewed it, so here it is, even if late.

And you shall hallow the fiftieth year, and you shall proclaim liberty throughout the land to all its inhabitants…

Every July 4th I like to pull out my DVD of  this film version of the Tony Award-winning Broadway musical and revisit old Philadelphia in honor of the founding of our country by the Second Continental Congress. The film is directed by the same man who directed the Broadway production, Peter H. Hunt. Despite it’s garbling of history –more on that later, with neither Broadway or Hollywood ever caring much about accuracy—I have always found the film charming and inspirational, as well as reminding us that the Founding Fathers were men, and not the demigods extolled in so many florid  4th of July speeches. (I was just now surprised to learn that my idol Roger Ebert hated it!)

Centering on the uphill battle of John Adams to convince the Congress to even discuss his proposal for independence, it then depicts the struggle to get every delegate to vote for the Declaration of Independence which he and Ben Franklin have coerced Thomas Jefferson into writing because the delegates from the South demand that the vote must be unanimous, something that the despairing Adams thinks at first will be impossible, especially when he clashes with Edward Rutledge of South Carolina over slavery.

In Peter Stone’s witty script John Adams is despised by most of the other delegates because he keeps bringing up the subject of independence. Adams, played by William Daniels, complains,

“I have come to the conclusion that one useless man is called a disgrace; that two are called a law firm, and that three or more become a Congress! And by God, I have had this Congress! For ten years, King George and his Parliament have gulled, cullied, and diddled these colonies with their illegal taxes! Stamp Acts, Townshend Acts, Sugar Acts, Tea Acts! And when we dared stand up like men, they have stopped our trade, seized our ships, blockaded our ports, burned our towns, and spilled our BLOOD! And still, this Congress refuses to grant ANY of my proposals on independence, even so much as the courtesy of open debate! Good God, what in hell are you waiting for?”

In the musical’s first song members of the Congress express their exasperation with Adams by singing “Sit Down John.”

He is paired with Benjamin Franklin (a delightful Howard Da Silva), so that sometimes I think of him as the Bud Abbott straight man to the comical Lou Costello. In a funny scene filled with words that rhyme with Lee the two of them manipulate the foppish delegate from Virginia Richard Henry Lee (Ron Holgate) to agree to sponsor the motion for discussing independence, correctly believing that then the other delegates would then vote for it. Later the two of them, appointed to a three-man commission to write the Declaration, convince Thomas Jefferson (Ken Howard) to actually write the document.  And when after a week without a document being penned, they realize that Jefferson misses his new wife Martha (Blythe Danner) so much that he cannot write, so they arrange for her to travel from Virginia to the city. The two anxiously keep watch beneath Jefferson’s quarters while the lovers engage in you know what. The pair even indulge in a charming song and dance sequence with the beautiful Martha. And then comes the writing of the document and afterward the acrimonious debate over it, especially the section in which Jefferson had inserted a section that included black slaves also were entitled to “life, liberty, and the pursuit of happiness.

This lengthy sequence, in which South Carolina Edward Rutledge (John Collum) engages in a duel of words with Adams and Jefferson, alone is worth watching the film,

John Adams: That little paper there deals with freedom for Americans!

John Adams: Yes, they are. They are people, and they are here. If there’s any other requirement, I haven’t heard it.

Edward Rutledge: They are here, yes, but they are not people sir, they are property.

Thomas Jefferson: No, sir they are people who are being treated as property! I tell you, the rights of human nature are deeply wounded by this infamous practice!

Edward Rutledge: Then see to your own wounds Mr. Jefferson, for you are a practitioner are you not?

Thomas Jefferson: I have already resolved to release my slaves.

Edward Rutledge: Oh. Then I’m sorry, for you’ve also resolved the ruination of your own personal economy.

John Adams: Economy. Always economy. There’s more to this than a filthy purse-string, Rutledge! It is an offense against man and God!

Edward Rutledge: Is it really now, Mr. Hopkins? Then what’s that I smell floating down from the North? Could it be the aroma of hy-pocrisy? For who holds the other end of that filthy purse-string, Mr. Adams? Our northern brethren are feeling a bit tender toward our black slaves. They don’t keep slaves! Oh, no. But they are willing to be considerable carriers of slaves to others. They’re willin’! For the shillin’. Or haven’t you heard, Mr. Adams? Clink, clink.

Rutledge then sings the haunting song “Molasses to Rum” in which he drives home his point of the North’s involvement with slavery and thus its hypocrisy.

Molasses to rum/ to slaves/ Who sails the ships back to Boston/ laden with gold, see it gleam? Whose fortunes are made/ in the triangle trade/ hail slavery! The New England dream. Mr. Adams, I give you a toast: Hail Boston! Hail Charleston! Who stinketh… the most?

Adams is silent in response to this because he knows it is true.

Later, when it comes to the vote Adams and Jefferson are forced to make an odious choice over independence versus the abolition of slavery, as we see in the following exchange:

Edward Rutledge: [In the final vote for Independence, Rutledge wants the slavery clause removed from the Declaration, or else he will vote against independence] Well, Mr. Adams?

Edward Rutledge: [stands] Mr. Adams, you must believe that I will do what I promised to do.

John Adams: [stands and approaches him] What is it you want, Rutledge?

Edward Rutledge: Remove the offending passage from your Declaration.

John Adams: If we did that, we would be guilty of what we ourselves are rebelling against.

Edward Rutledge: Nevertheless… remove it, or South Carolina will bury, now and forever, your dream of independence.

John Adams: Mark me, Franklin… if we give in on this issue, posterity will never forgive us.

Dr. Benjamin Franklin: That’s probably true, but we won’t hear a thing, we’ll be long gone. Besides, what would posterity think we were? Demi-gods? We’re men, no more no less, trying to get a nation started against greater odds than a more generous God would have allowed. First things first, John. Independence; America. If we don’t secure that, what difference will the rest make?

Thomas Jefferson: What else is there to do?

John Adams: Well, man, you’re the one that wrote it.

Thomas Jefferson: I wrote ALL of it, Mr. Adams.

[stands and goes to the Declaration, crosses out the clause]

John Adams: [snatches the paper from Jefferson and takes it to Rutledge] There you are, Rutledge, you have your slavery; little good may it do you, now VOTE, damn you!

There are several tropes running throughout the film that add both dramatic and comic touches:

The unnamed courier is given a dramatic moment as he sings the mournful “Momma Look Sharp” in which the painful death of a fellow soldier is described, thus bringing the horror of armed combat into the meeting hall.

As a Presbyterian I was happy to see that one of the founding fathers of our church, John Witherspoon (James Noble) is depicted in the film as the leader of the New Jersey delegation to the Congress. We always like to tell prospective members of our denomination that John Witherspoon was the only clergyman to sign the Declaration of Independence.

Historians must shudder at all the inaccuracies—Martha Jefferson never traveled to join her husband in Philadelphia, Samuel Adams, second cousin to John, is not in any scene. Contrary to the film, he was the controversial firebrand for independence, and John was actually widely respected by the delegates. I am disappointed too that the depiction of Pennsylvania delegate John Dickenson does not refer to his Quaker background that prompted him to seek reconciliation with King George—he went on to fight in the army, and was that rare man of the times by setting free his slaves. (Whereas Witherspoon, I am ashamed to say, owned two slaves at the time of his death.) There are many more inaccuracies, so to those interested I refer you to the excellent Wikipedia article “1776 (Film)” which has a very long section on the many musical’s many deviations from history.

Filmmakers have always justified their misrepresentations of history by saying that they are out to entertain, not to educate, and so story always trumps history. I usually don’t go along with this, but in the case of 1776, I agree. This is a very entertaining film that depicts our Founding Fathers as flawed human beings who did indeed rise to a momentous occasion, performing what some call the “miracle at Philadelphia.” They did choose independence (not liberty!) over the abolition of slavery, but as the film clearly shows, this time in agreement with history, they made the right choice—indeed, there was no other if they were to give birth to a new nation. Watching this film is a good way to celebrate and honor those remarkable men.

IMDB has the longest “Quotes” section for this film of any that I have seen. Scrolling through this will be bring back most of the movie to you, though I wish the quotes had been entered in the order they appear in the film.

See the Founding Fathers sing & dance in this musical comedy about events leading up to signing of the Declaration of Independence, based on the Tony Award-winning Broadway play.
Editor Rating ★★★★★4 out of 5
More Details